Supergirl has moved to The CW, and that means a whole lot of set tweaks, and several noteworthy creative changes to the series. Contrary to speculation, Supergirl’s universe won’t be merging with The CW’s shared DC Television Universe this season, despite Kara making more than one inter-dimensional trip to the home of Arrow, The Flash and Legends of Tomorrow both this year and in 2017, and that may disappoint some, though fortunately, the second season of Supergirl nonetheless gets off to a very strong start in this week’s season premiere, “The Adventures of Supergirl.”

The look of the show has been downscaled a bit, and the DEO set has been completely overhauled with a new building and location (one that is humourously referenced as being much closer to home in National City for Kara and Alex), but despite that, the show still picks up less than a day after the conclusion of Season One. Kara is still deliberating the new position that she wants at CatCo, while the DEO studies the mysterious individual that was found in that unseen pod during the cliffhanger ending to Season One, back when this show aired on CBS. Yes, it was an individual inside, and the young man appears to be a Kryptonian at that.

That’s not the Kryptonian that viewers will be interested in during this season premiere however, as this universe’s Superman finally appears in the flesh in this episode, possibly thanks to the series moving to a network directly co-owned by DC Entertainment parent, Warner Bros. Tyler Hoechlin brings the Man of Steel to the Supergirl universe, after he was merely ‘seen’ in flashbacks, text messages and obscured distances during CBS’ first season, and despite the looming shadow of Henry Cavill from the big screen DC Extended Universe movies, Hoechlin is actually one of the best parts of this season premiere.

Hoechlin’s likable and inspiring Superman persona makes for a breezy, lighter contrast to Cavill’s more intense Superman portrayal in DC’s modern movie universe, while also punctuating the episode with lots of cute references to 1978’s Superman: The Movie, including a mention of an earthquake in California caused by Lex Luthor (as with the climax to the 1978 movie), one character mentioning flying being the safest way to travel (a quote by Christopher Reeve’s Superman that was spoken in the movie, later repeated by Brandon Routh’s Superman in 2006 movie, Superman Returns), and best of all, Cat Grant hiring a new assistant named ‘Miss Teschmacher’, identical to the name of Lex Luthor’s downtrodden lady friend in that movie. Cat even screams her new assistant’s name at the top of her lungs when addressing her, just as Gene Hackman’s Lex Luthor did in Superman: The Movie, which was especially funny. 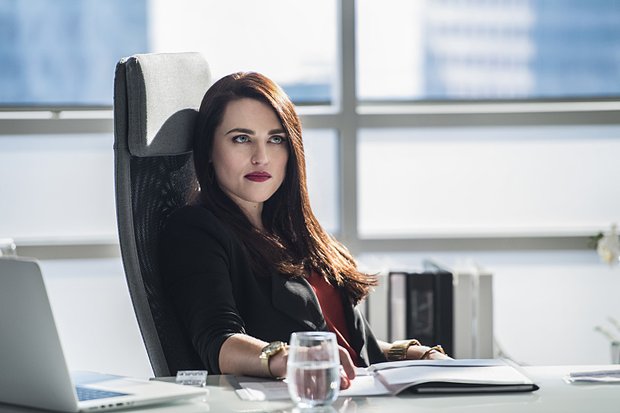 Speaking of Lex Luthor, a major addition was made to Supergirl in this season premiere, beyond Superman finally properly being featured in this episode, and that comes with new recurring lead, Lena Luthor, Lex Luthor’s adopted sister, who is present in DC Comics lore, albeit in a much smaller capacity. With Superman’s bald-headed arch-nemesis being in maximum-security prison, Lena wants to redeem the Luthor name, even re-branding LuthorCorp as ‘L-Corp’, which is a focal point for this episode’s villain-of-the-week, John Corben, an international assassin who wants Lena dead. DC fans obviously know that Corben is destined to become future Superman nemesis, Metallo, but for now, he’s an ordinary human, which made him an interesting threat, especially when Superman inevitably distrusts Lena, on account of her surname. The episode nicely stacks an opening action scene’s evidence, where a spacecraft is sabotaged by who appears to be Lena, against Lex’s ill-fated sister, but the reveal that she was the victim and the target of Corben later on, made for a pretty good twist. The episode also inevitably ends with a wounded Corben, who is shot and critically wounded by Lena, being recovered by Cadmus, and injected with some miracle formula that appears to begin his transformation into Metallo, no doubt to menace the Girl of Steel and possibly even her cousin later this season.

The material with Superman and Supergirl was universally superb in this episode, and even the idea of moving Winn from CatCo to the DEO was very smart, and felt very logical. The show even tries to place a bit more emphasis on Kara’s civilian life, without letting her Supergirl identity override everything, as it often did during Season One. Cat grills Kara mercilessly about her prospective new job position most of all, which sometimes feels a little schmaltzy, but Kara eventually being pushed to choose a new destiny as a reporter was a pretty satisfying final result, even if this also has her acting all the more like a female stand-in for the more recognizable Superman character in this universe. Kara taking a great step forward was still an inspiring moment though, especially when Cat continues to help her get there, and the reveal that Cat pegged Kara as a reporter from the very beginning, and subtly nudged her onto that route all along, was also a pretty sweet twist. 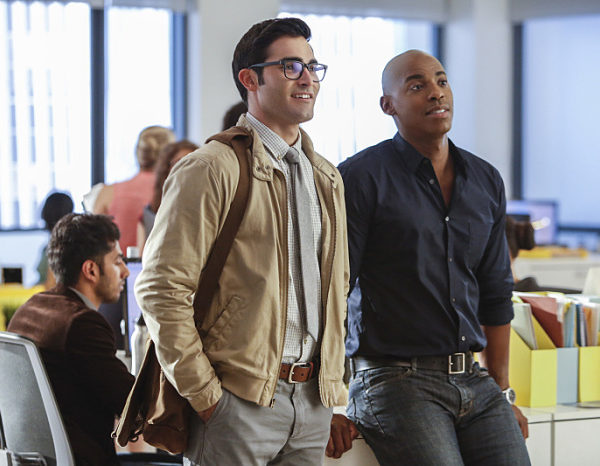 The one element that really didn’t work in this otherwise superb season premiere for Supergirl is the ever-tedious romance with James. Kara once again runs into a bunch of distractions when she tries to date James, and this leads to the show forcing some hokey, unrealistic drama between the two, especially when Kara lets her fretting over her job override the romantic opportunity that she’s been craving for however many months now. Kara in turn deciding to drop the romance altogether by the end of the episode is also annoying, and further draws attention to the fact that the Kara/James relationship drama in general has never worked very well, with any James-related romance constantly serving as the weak areas of Supergirl’s first season, whether it was with Kara or Lucy Lane. This decision to firmly make Kara and James platonic could very well have been a creative mandate from Supergirl’s move to The CW, but maybe that’s welcome, and maybe we can finally bury this increasingly tiresome romance bellyaching that has always dragged down what’s otherwise a pretty good female-driven superhero show.

All in all though, it’s very rewarding to see Supergirl soar so much in its first proper outing on a new network, and that presents great promise to come for the show’s new home on The CW. “The Adventures of Supergirl” provided a strong introduction for Superman, without stealing the thunder of Supergirl at all, and also found smart, organic ways to transition characters to new roles for Season Two, while also finding clever excuses to shift around the sets, now that the show has moved production from California to Vancouver. Cadmus is still sitting firmly in the background, and the big pod discovery has also been mostly pushed aside for now, but if this episode is the proper indication for what can be expected from Supergirl’s future on The CW, then I’d say that the Girl of Steel’s future has never been brighter!