NOTE: Full spoilers for this episode of “The Flash”, including a major change to the canon of sibling series, “Arrow”, are present in this review

After a disappointingly constrained alternate-timeline story that kicked off The Flash’s third season last week, this week’s episode, “Paradox”, jumped into the fallout that lingers in the new present. Turns out, Iris and her father no longer being on speaking terms is the least of Barry’s worries in the altered present, especially when we finally see a major change to the canon of originator series, Arrow as a result of Barry’s manipulation of the timeline.

Emily Bett Rickards briefly guest stars in the opening moments of this episode, with Felicity serving as Barry’s main confidant for how the present has now changed after Flashpoint. Felicity serves disappointingly little purpose in the episode beyond this, but even with her brief appearance, it’s always nice to give her another private interaction with Barry, something that hasn’t happened in a while in the DC Television Universe. It’s also predictable that most of Arrow’s established canon survived the timeline manipulation, at least as far as Barry can see (obviously, Arrow fans that don’t watch The Flash can avoid a lot of confusion this way), though one major character shift has been made for Arrow as a result of Barry’s actions; Diggle and Lyla no longer have a daughter, and instead, little Sara has become a son, John Diggle Jr. This closes a plot hole that was opened in Legends of Tomorrow last season, where Diggle didn’t seem to have a daughter at all in the future, and instead had a son that became the DC Television Universe incarnation of archer hero, Connor Hawke. Whether intentional or not, this was a nice way to bring Legends of Tomorrow into the fallout of Flashpoint as well.

As for the episode’s main events in Central City, they’re pretty good as well, and better than those of the season premiere. The Flash still hasn’t quite reached its usual level of outstanding quality yet though, with, “Paradox” being a fairly good episode, but one that still feels like it’s taking a slower, more methodical approach than this show is normally used to. This is perhaps due to the higher, more abstract ambition of the Season Three threat for The Flash, which has a mystery more apparent and requiring of more intense buildup, so I trust that greater episodes will come later in the season. That said though, it’s still disappointing that we have to slog through some slower episodes before we start getting to the good stuff.

Beyond the established consequences for Iris and Detective West, we also see that Cisco has had a large toll taken on him in the new present, namely that Dante was killed by a drunk driver in this new timeline. Dante’s death has left Cisco bitter and distrusting of Barry (suggesting that the loss of Dante was very recent for Cisco), and Barry seemingly being unaware of it doesn’t help matters either. The idea that Barry apparently refused to go to the past to save Dante in this new timeline was also an interesting and heart-wrenching source of conflict between the two characters, especially when Barry later confesses to his friends that his misunderstanding of the present came from him trying to save his mother in the past, and then trying to undo that alternate timeline, only to create yet another new present with smaller, yet still significant changes. 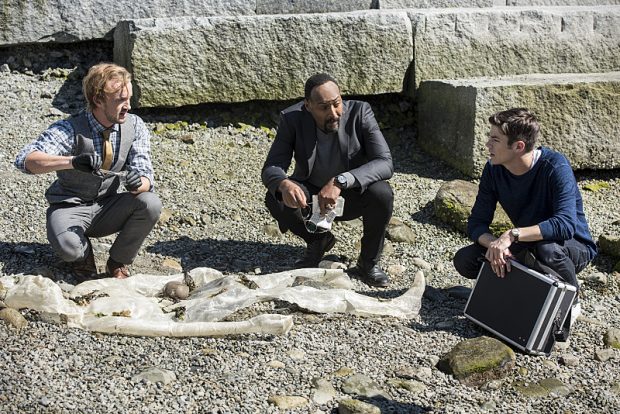 We also see that Barry’s actions might have directly resulted in the creation of Doctor Alchemy, who gives Edward Clariss his speedster abilities back, and transforms him into The Rival once again. The threat of The Rival is disappointingly dull though, even if it does serve as another interesting twist for Cisco when he bails Barry out of certain death, namely that Cisco has now mastered offensive use of his Vibe abilities in this new timeline. Cisco isn’t inclined to work with Barry just yet, but Cisco getting a chance to be the hero in this episode did help to build some bridges, and slowly, he is on the path to becoming his old self again, even christening Doctor Alchemy with his name from DC Comics lore.

The new present has also led to Barry having a hostile new CSI in his office at the CCPD, Julian Albert, played by Tom Felton of Harry Potter fame. Julian and Barry clearly don’t like each other, and Julian’s character presents an interesting new dimension to Barry’s latest development, namely in that he provides an antagonist in the civilian workplace of Barry’s life, rather than just another foe that he faces as The Flash. Felton’s suspicious character begrudgingly works with Barry when mysterious husks start showing up around Central City, Team Flash’s first clue to the presence of Doctor Alchemy, but Julian also makes it very clear that he doesn’t trust Barry, and astutely realizes when Barry steals a sample from a husk with his super-speed. Julian doesn’t seem to put together that Barry is The Flash, but in knowing that something really isn’t right about his CCPD co-worker, he does give Barry extra incentive to watch his back, now making Barry’s CSI work just as tricky as his work at S.T.A.R. Labs.

Another stronger moment in an otherwise slower episode was a welcome return for John Wesley Shipp’s Jay Garrick, who pulls Barry out of the Speed Force and whisks him to a neutral destination in 1998, to lecture him about playing with time. The reveal that Jay made the same mistakes as Barry by irresponsibly manipulating his own timeline on Earth-Three was very interesting, and Barry having to directly confront his selfish desire to constantly take do-overs that time won’t allow, was a well-executed moment. The coffee cup analogy for Barry’s time manipulation was also very apt, and smartly leads to Barry confessing what he’s done to his team, while also resolving to never mess with time for personal gain again. The team also seems to have a growing threat from within now too, which comes out towards the end of the episode, when Caitlin displays that she’s developed icy superpowers in this new present, much like her late Earth-Two doppelganger, Killer Frost. Looks like our well-established and beloved Caitlin is set to become Killer Frost in the show’s main timeline after all. Will she still be an ally for much longer?

“Paradox” still has The Flash taking its time in building up a very different, more abstract set of stakes for this show, and possibly the DC Television Universe as a whole going forward, though at least it had a fine share of good scenes. It’s just too bad that The Flash’s new season is taking a while longer to truly grip audiences and become exciting, teasing another solid new mystery, but one that’s currently a bit doggedly-paced in some respects. Even more frustrating is that the West family drama and Clariss himself seem to be thrown out by the very end of the episode, making them feel like minor inconveniences, rather than serious issues. There’s clearly tons of exciting developments to look forward to this season, and it’s also appreciated that the show is making a conscious effort to better move away from an onslaught of forgettable C-list villains-of-the-week, granted. For now though, it seems like Reverse Flash and Zoom certainly made speedier impressions than Doctor Alchemy, even if the end result of Alchemy’s grand plan could still very much be worth the wait.

The Flash 3.2: "Paradox" Review
The Flash is continuing to methodically lay the groundwork for Flashpoint-induced alterations to the canon this week, resulting in a mostly good episode that still isn't hitting the ground running yet.
THE GOOD STUFF
THE NOT-SO-GOOD STUFF
2016-10-12
80%Overall Score
Reader Rating: (0 Votes)
0%