After three episodes dedicated to resolving the Jimmy Figgis/Coral Palms conflict with Peralta and Holt that ended Season Three and began Season Four of Brooklyn Nine-Nine, Peralta and Holt have finally made it back to New York. Despite that however, the punishment of the (now strangely absent) Captain C.J. seems to be sticking with the precinct, with even Holt forced to keep his squad in the night shift.

More importantly however, “The Night Shift” also serves as the first half of a two-part crossover event with fellow FOX sitcom, New Girl, with the event starting in this week’s episode of Brooklyn Nine-Nine in the 8:00-8:30 P.M. Tuesday timeslot, before New Girl resolves the storyline in the 8:30-9:00 P.M. Tuesday timeslot immediately afterward. It’s a bit strange that Brooklyn Nine-Nine would immediately leap into a crossover episode with New Girl right after the conclusion of the Coral Palms storyline, though the point ends up being moot in the end, since the first half of the crossover storyline in Brooklyn Nine-Nine ends up being a bit of a disappointment. 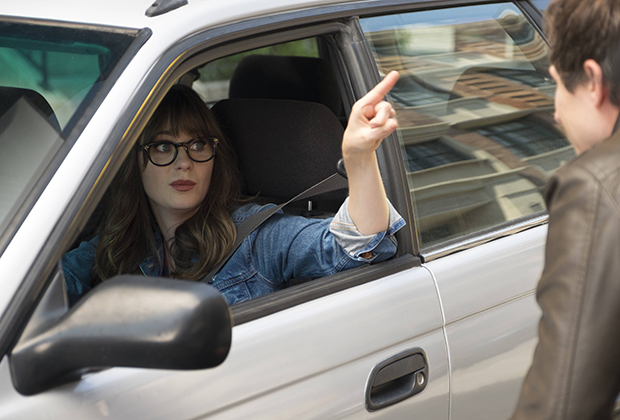 The biggest reason for why this episode feels a bit weaker than usual is because, for a crossover episode especially, this storyline doesn’t have much fanfare in the end. The crossover element with New Girl is constrained to just one scene, which is the biggest disappointment of all. The New Girl episode that immediately follows does a bit more with the crossover idea, but on Brooklyn Nine-Nine, all we get for a crossover is a brief scene that, while admittedly funny, simply has Peralta commandeering the vehicle of Jess from New Girl by sheer coincidence, to chase a criminal that gets away anyway. Andy Samberg and Zooey Deschanel certainly have a lot of comedic chemistry, which might have led to FOX green-lighting this crossover event in the first place, but it’s just annoying that more isn’t done with the surprising blend of FOX’s two marquee Tuesday night sitcoms.

The rest of the episode predictably has the squad bellyaching about the night shift, and not much else is done with most of the characters. There’s some funny lines here and there, but this feels like a strangely passive night for the squad. Maybe that’s the idea, since the night shift has immediately sucked the life out of the detectives, and even Captain Holt, but rather than derive this show’s usual standard of smart, amusing humour from the uphill grind of being a New York cop in the modern world, it just felt like the show sort of became sleepy, in a bad way. Andre Braugher and Terry Crews fortunately kept the comedy at least decent, with Holt trying to improve the squad’s morale with increasingly ridiculous tactics, and Jeffords developing an apparent case of, “Night sass”, but it didn’t feel like many of the other jokes were that memorable or funny, and that’s disappointing. 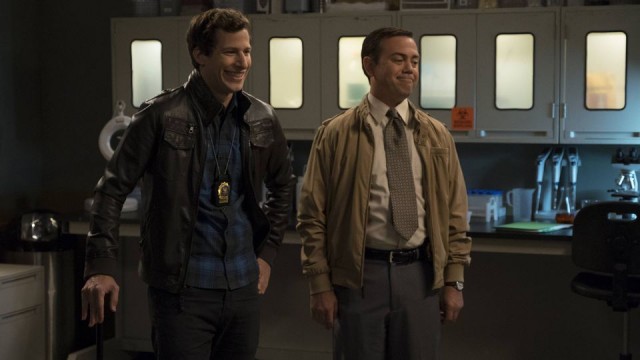 Another nagging misfire in this crossover episode is Peralta having to try to accommodate Boyle having an adopted son with Genevieve. The show does finally clarify that Boyle and Genevieve adopted the boy here, even if that was implied, though Genevieve sadly isn’t seen this week. Instead, Boyle pays a lot less attention to Peralta, which leaves Peralta mentally slowed as much as physically slowed from his Coral Palms injury, on account of Boyle caring more about going home than doing police work with Peralta. The return of Matt Walsh as sad sack detective, Lohank, now a bright, chipper and fortunate day shift detective that gives Peralta sage advice throughout the episode, is a great bright spot in this storyline though, as was Peralta trying to make the best of the situation by declaring him and Boyle the, “Night Boys.”

Surprisingly, another bright spot in this episode came from a subplot with Santiago and Diaz, despite it also not being that funny. Diaz keeps sneaking off to avoid doing work, much to the chagrin of Santiago, who eventually gets Scully and Hitchcock to help her spy on Diaz, ironically exhibiting the same unprofessionalism. When Santiago thinks that she spots Diaz sitting on a park bench and playing with her phone however, she confronts Diaz about it, only to get the surprising reaction of Diaz breaking down into tears, and saying that she was waiting for Pimento, who never showed. The loose end of Pimento is a big one, now that Figgis has been successfully apprehended, and the unexpected gut punch of Pimento not returning on cue for Diaz was one that actually worked well. It also helped to strengthen the friendship between Santiago and Diaz in a nice way, particularly since we learn second-hand here that Diaz was the one who primarily gave Santiago comfort between seasons, while Peralta was stuck in Coral Palms with Holt. 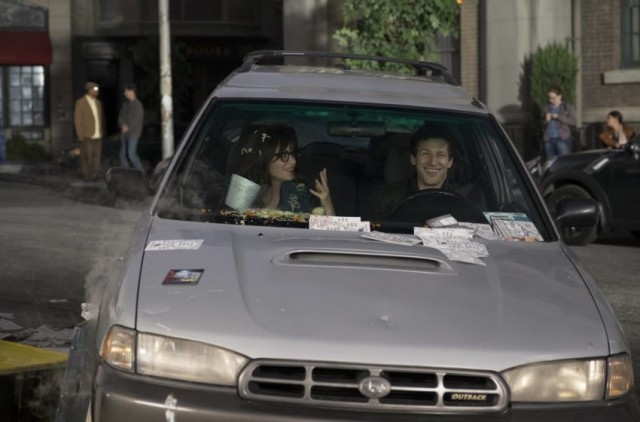 It’s still a let-down that this episode of Brooklyn Nine-Nine ended up being merely acceptable though, conspicuously wasting its big opportunity to cross over with New Girl. The twist with the absent Pimento and the return of Matt Walsh’s Lohank worked well, as did some of the comedic shouldering of Crews and Braugher, but unfortunately, Brooklyn Nine-Nine might have attempted this crossover a bit too early in the season, since it just didn’t feel like the show was on its A-game here. At least there’s a higher chance that the New Girl episode will be more comedically sharp to fans of both shows, but leaving Brooklyn Nine-Nine fans to tune into a whole other sitcom for the proper potential of a crossover feels like a cheat, especially when Brooklyn Nine-Nine is usually one of the best FOX sitcoms overall on most weeks.