The months-long hiatus of Brooklyn Nine-Nine has finally come to an end. After just over three months without the chance to check in with the funniest police precinct on television, the show has finally returned this April, with a midseason premiere that sets up a big new obstacle for the Nine-Nine. “The Audit” also brought back one of Santiago’s former flames to boot, creating an interesting dilemma that spawned three mostly great story arcs.

The episode begins with the confirmation of what many of us would have already anticipated; Gina survived being hit by a bus at the end of the midseason finale way back on New Years Day in January, and is returning to work after a two-month absence in this midseason premiere. Gina’s attempts to remain ‘fabulous’, despite her horrific injury, all made for plenty of hilarious material, as well as a surprisingly effective save towards the end of the episode. She obviously wasn’t going to die, but it’s nonetheless satisfying to see her being funny as ever, even when she has to sit out most of this episode’s active storytelling, since she can’t really strain herself in any way. 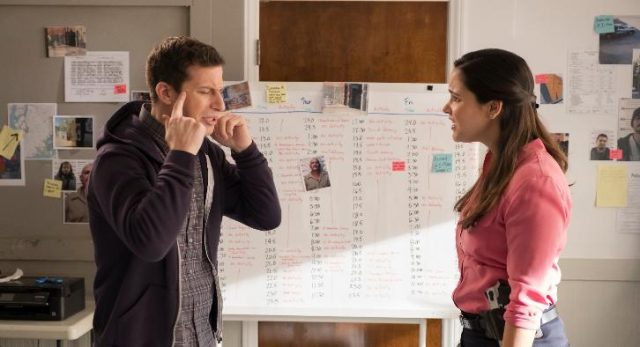 After the reveal that Gina is alive and on the mend, Holt then reveals that crime is way down in Brooklyn, and that means that one of the twenty-two precincts in the borough is being shut down. The Nine-Nine is naturally nervous about this turn, and only becomes more nervous when they see that the auditor is Sergeant Teddy Wells, Santiago’s ex from back in the show’s first two seasons. The surprising return of Teddy led to a very funny core plot with Peralta and Santiago, as they must try and appease a still-bitter Teddy about the circumstances behind his break-up with Santiago in Season Two. Oh dear.

This funny setup led to an equally funny twist too, when it’s revealed that Teddy is actually fine with the circumstances behind his break-up with Santiago, and isn’t looking to penalize the Nine-Nine on account of that. This is initially good news, until Peralta and Santiago accidentally record themselves on Teddy’s phone, declaring him the most boring man in America. This has the two partaking in a ‘jazz brunch’ to try and erase the phone, where they have to fake being in an aggressively unhealthy relationship in front of Teddy and his new girlfriend. This has the also-unforeseen side effect of convincing Teddy that he still has a shot with Santiago though, and he even goes as far as proposing to Santiago in front of both Peralta and the girlfriend! Naturally, that doesn’t end well, and seems to seal the Nine-Nine’s fate.

Again though, the precinct can breathe a sigh of relief, when Teddy comes in to announce that he’s removing himself from the audit. Instead, Teddy is being replaced by another auditor, one that actually has a romantic history with Jeffords. The episode then ends as the new auditor, seemingly sweet and friendly, whispers to Jeffords that she is going to shut down the Nine-Nine, and there’s nothing that Jeffords can do about it. Looks like we have our big new antagonist for Season Four’s back half. The fact that Jeffords is in the crosshairs this time, not Holt, should hopefully provide a nice way to keep the comedic conflicts fresh and interesting for the remainder of the season, especially since it looks like the rest of the precinct isn’t going to be initially aware of how much trouble they’re actually in now.

Outside of the main story events with Peralta, Santiago and Teddy, the other detectives and Holt try to do what they can to clean up the precinct and make it look extra presentable. As with Peralta and Santiago however, their efforts to fix things up only serve to make everything worse, as Jeffords tries to fix a Japanese photocopier, while Boyle and Diaz try to neutralize a rat infestation. Holt and Gina both floated between these two subplots, with Gina being largely disconnected from the episode’s stakes until she provides the big save at the end, taking advantage of her injury to guilt a clean-up crew into fixing the precinct for the detectives. 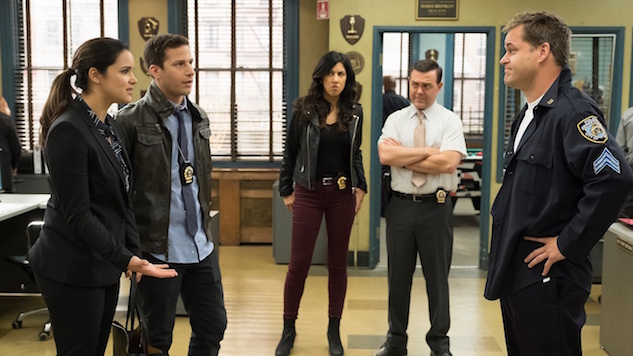 Before that though, we get plenty of comedic zaniness in the subplots, which is generally pretty effective at creating laughs. The subplots are perhaps a bit too ridiculous at times, since the comically unhelpful photocopier and comically impervious rats don’t feel all that realistic, but I suppose that the strength of the humour helps to make up for that. Boyle’s efforts to escape being trapped in a vent after the rats flee to it upon chewing on a cocaine bag delivered one of the episode’s highlight moments too, as the water that pours down from Boyle’s plummet ends up breaking the photocopier, immediately after Jeffords fixes it. I’d hate to imagine what the precinct would do, had Gina not been hit by a bus back in January!

Brooklyn Nine-Nine seems to be kicking off the delayed back half of its fourth season on a pretty strong note in this week’s midseason premiere. “The Audit” delivered plenty of reliably funny storylines, while also setting up a promising new antagonist for the precinct as a whole. Teddy wasn’t ultimately able to stick around as the big threat, but an ex-girlfriend of Jeffords still sounds like a pretty solid trade-off. It was also genuinely surprising to see how well the show capitalized on Gina’s horrific injury too, even as she became a more passive presence in this latest episode. Hopefully Gina truly is back to being fabulous as ever before long though, since the Nine-Nine is going to need that charm to have any chance of staying open soon!