NOTE: Spoilers from throughout the second season of, “Legends of Tomorrow” are present in this review

Legends of Tomorrow has truly come a very long way since its humble beginnings at the start of 2016. Its first season managed to find its footing towards the end, despite some early stumbles, but it’s the second season that truly cements the show as one of The CW’s overall best current shows in general, let alone best DC shows. This dark horse series was so good in Season Two in fact that it even managed to pull ahead of the network’s DC sister shows by a pretty sizable margin, with Legends of Tomorrow now surpassing The Flash as seemingly the best syndicated DC Universe-inspired show on the air right now!

A lot of this came down to several necessary tweaks that had Legends of Tomorrow no longer burdened by its lesser beginnings. Vandal Savage is now dead and gone, for starters, replaced with an ‘anti-Legends’ of sorts in the Legion of Doom, a far better squad of villains that were comprised of former arch-foes from The Flash and Arrow. Rip Hunter also sat out most of the season, partially due to Arthur Darvill’s commitments to British TV series, Broadchurch, but also to allow the other Legends to breathe and function as their own independent unit, particularly with time no longer at the mercy of the corrupt Time Masters. This allowed for better and more interesting character conflicts to gel between the team, especially since they’ve now become a lot more comfortable moving through time, to correct ‘aberrations’ to history, Doctor Who-style.

The decision to make Sara Lance the new team captain, taking the place of Rip after he goes missing at the end of the season premiere, proved to be a brilliant one too. Sara continuing to fight her internal darkness, and redeeming herself through a sense of sworn duty, made her truly the perfect commanding officer for the Legends, and seemed to cement actress, Caity Lotz as a fantastic face for Legends of Tomorrow. Ray Palmer, Martin Stein, Jefferson Jackson and Mick Rory also remain a part of the Legends throughout Season Two, as each explore new and interesting issues with themselves and each other.

It’s very evident in Season Two that the scope of Legends of Tomorrow’s character and story conflicts has widened considerably now, to outstanding effect. The show goes deeper and darker in Season Two, while still remaining fairly light-hearted in terms of its outward tone, which leads to many very clever and interesting story turns that made Legends of Tomorrow consistently riveting in its sophomore season. Incidents like Martin accidentally changing history to give himself a daughter, Rip being temporarily turned to the Legion of Doom after he’s finally recovered, and Mick becoming a surprisingly useful and competent hero in his own right, sans Snart, all made for lots of great episode hooks.

The team’s two new additions, Nate and Amaya, also quickly fit right in, taking the place of Kendra and Snart from Season One. Nate is a historian and proud geek that proved likable and dramatic in equal measure, as lesser-known DC superhero, Citizen Steel, which he becomes after he accidentally gives himself the ability to turn his skin into indestructible metal. Amaya, meanwhile, is the grandmother of the present-day Vixen, Mari McCabe, and a representative of the Justice Society of America, a team of Golden Age 1940’s superheroes that were also introduced this season. Amaya gave the team their first member that didn’t come from 2016/2017, if one doesn’t count Rip, and that in turn led to a lot of questions about what happens after the Legends’ missions is done, especially since Amaya needs to survive to ensure the existence of another superhero that we’ve already met in the DC Television Universe. The fact that Amaya began a love affair with Nate, after Mick silently fell in love with her in the background, only to die in the season’s penultimate episode, really brought that point home, even if it was outdone fairly quickly in the season finale the following week.

Nonetheless, the material with the Legion was also fantastic, with some episodes even unfolding primarily from their perspective, to great effect. The key agenda of the Legion is seeking out the pieces of the Spear of Destiny, a magical real-world artifact that, in the show’s canon, has the ability to bend and alter reality to the user’s wishes. Eobard Thawne, the Reverse Flash, rallies Arrow’s Malcolm Merlyn and Damien Darhk (and eventually Snart towards the end of the season), to help him locate the Spear, in a very clever carryover from events on The Flash, which had its titular hero accidentally unleash his arch-nemesis anew, after meddling in the past to change the future. Thawne was given the interesting limitation of not being able to stay in one time period for too long, as he’s being aggressively hunted by Black Flash as someone who is supposed to be dead in the current timeline. This not only helped to balance out the overwhelming speedster power that Thawne wields, but also made for an intriguing hint of something else that may happen in the DC Television Universe’s future, as Martin and Jefferson accidentally stumble onto a recording of Barry Allen circa 2048, who warns Rip of a mysterious menace to come. 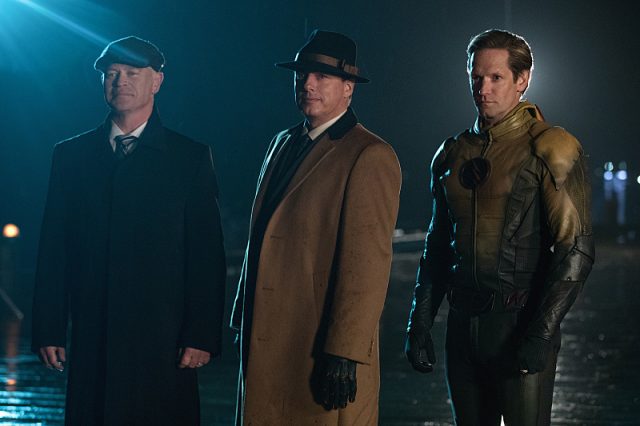 Overall, there was a fantastic sense of rewarding experimentation throughout Legends of Tomorrow in its second season, which made the show feel more creative and exciting than it’s ever been. Things like episodes unfolding from the villains’ perspective, real-world historical figures getting the chance to interact with the Legion as much as the Legends, the JSA’s introduction as a 1940’s superhero team, and a season climax that had reality itself altered to the villains’ desires, all made for a very inspired show that currently feels like it’s constantly and effectively re-inventing itself, while anchored by both a strong cast of characters and a compelling overall battle. There are still a handful of lesser episodes here and there, which is about the worst you can say about Season Two, but that’s not really worth dwelling on. There was rarely a point all season where it didn’t feel like Legends of Tomorrow was firing on all cylinders.

Legends of Tomorrow was pitched as the best sensibilities of the DC Television Universe coming together, with a revolving set of backdrops and conflicts, and in Season Two, it’s finally fully achieving that promise. Even during a season that is surprisingly choked with new time manipulation-themed shows, between NBC’s Timeless, ABC’s now-cancelled Time After Time, FOX’s Making History, and for the most part, The CW’s own Frequency (plus a new series of Doctor Who from The BBC to come in a few days), Legends of Tomorrow had a lot of competition for its sophomore run. Between the glut of time travel shows and DC shows alike though, Legends of Tomorrow has now begun to rise head-and-shoulders above the competition, and has officially become both the current best DC Television Universe show, and one of The CW’s best shows overall. This series may have started with a bunch of nobodies, but now, they truly are starting to live up to their name!

Legends of Tomorrow: Season Two Review
Legends of Tomorrow soared throughout its excellent sophomore season, surprisingly becoming the best DC show on the air right now, as well as one of the best shows on The CW as a whole!
THE GOOD STUFF
THE NOT-SO-GOOD STUFF
2017-04-11
91%Overall Score
Reader Rating: (0 Votes)
0%