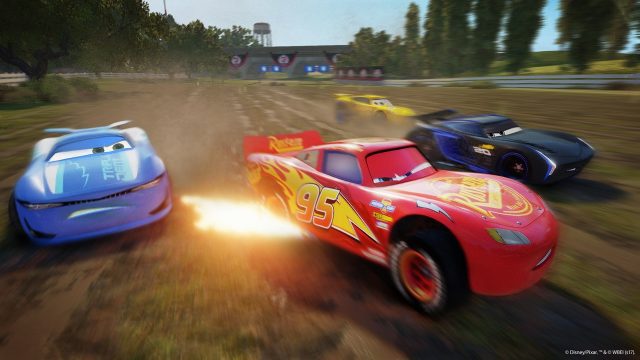 The Lightning-led Cars franchise may not be one of Pixar’s most beloved, but that hasn’t stopped the series from becoming a box office hit and an animated juggernaut in its own right. Hell, it did well enough to spawn a spin-off (Planes), though everyone seems to have forgotten about it.

Even though kids games (and tie-in games in general) have received a lot of deserved flack over the years, I still find myself drawn to some of them and haven’t always come away disappointed. In fact, the first couple of (numbered) Cars adaptations were both quite good, with the second one being very impressive overall. Going further, Disney’s Toy Story 3 video game is easily one of the best licensed games I’ve ever played, thanks to a solid story campaign and a very good, open world toy box mode.

Unfortunately, both games failed to receive the recognition they deserved from the wider gaming community. Then again, I guess that’s to be expected given their status as tie-ins for movies that were primarily aimed at a younger audience.

It’s for the above reasons that my interest piqued when I heard that Warner Bros. Interactive was partnering with Disney and its in-house developer, Avalanche (Disney Infinity, plus the aforementioned Toy Story 3 and Cars 2 video game adaptations), to bring Cars 3 to consoles. Given the developer’s pedigree and the quality of those that came before it, my hope was that this follow-up would be a solid and easy to champion experience.

Unfortunately, that isn’t exactly the case this time around. Instead of something great, Avalanche has given us a game that feels more like a cash-in than ever before. One that eschews quality and creativity for just getting the job done, all the while disappointing those of us who cared. It’s not an outright bad game, mind you, but it’s not necessarily good either. As such, it exists on the fulcrum of mediocrity, swaying each way ever so slightly.

Cars 3: Driven to Win begins with a cutscene, which I suppose is inspired by the movie’s plot. The setting is a TV show stage, wherein a former racer-turned-talking-chassis shares his opinion of the supposedly washed up Lightning McQueen. Like many others in the Cars universe, the former speedster seems to be certain that our red-hued protagonist is all but done competing for track-based glory.

As the player, it’s up to us to prove said asshat wrong.

What’s weird about this game is that it doesn’t feature a traditional, let alone structured, career mode. Instead, its main menu presents several different options, which can be used to gain access to different types of events. Then, as you progress, more and more will become available to you.

At first, the only thing you can really do is engage in some racing events. These are very basic contests, wherein a bevy of different Cars characters (including some from the new movie) compete to be the first to cross the checkered finish line. It’s simple and traditional, with very little in the way of creativity. That said, it’s serviceable and will appease kids who simply want to race as their favourite characters.

The downsides to this — as with every other mode in Cars 3: Driven to Win — are that the controls are mediocre and the difficulty is surprisingly high. When you couple that with slingshot AI that is able to catch up to and almost surpass you at will (on normal), it makes for a game that is more frustrating than it ever should have been. Keep in mind that this can even happen on the easiest difficulty, due to the game’s uneven artificial intelligence.

Along the way you’ll unlock new event types, like terribly simplistic trick contests and battle races that try to mimic Mario Kart but don’t come close. Takedown events are the best of this bunch, because they’re not only the busiest but also happen to be the most enjoyable. That’s because, instead of racing the AI, you’ll find yourself tasked with taking out waves of bots, which will do their best to avoid your fire.

All of these combine in cup championships, which are comprised of three different (usually related) events. It isn’t until the end of the list that the various game types combine in combination cups. 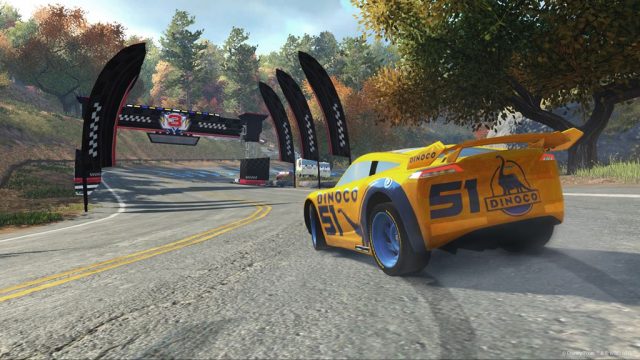 Those who like to play with friends can add a second controller and team up through another available option. It’s here where players can create their own sponsored team of sorts and work together. I was unable to really test this mode, though, because I didn’t have anybody else to play with, nor did I think that any of my friends would want to come over and play Cars. After all, they’re not as explorative (or as accepting) as I am when it comes to trying different types of video games.

Now, you’re surely wondering how one can beat Cars 3: Driven to Win, or if it’s even possible to do so. It is, but the way things are set up will confuse you to no end.

The main goal of this game — outside of racing — is to complete different tasks, or in-game achievements if you’d prefer that terminology. These include basic things, like trying each event type and winning certain cups, but there’s more to them than that. In fact, many will require you to play a certain way. This may mean taking out a set amount of foes, hitting several trick balloons at once, driving backwards for a listed amount of time, or completing master level challenges.

Each time you complete an event, you’ll be shown a grid on which each and every one of these accomplishments is listed. Your goal is, of course, to try to complete them all, although that’s easier said than done, especially when you’re asked to do crazy things like hitting opponents with something like 2000 different rockets. Anyone who forces themselves to do such a thing will only be in it for the achievements or trophies, which are a grind to begin with, and even then it’s just not worth it.

All of the above will lead to you unlocking more and more racers, several of which happen to be newcomers. Some of these unlockable chassis will require you to complete the above-mentioned achievements, but some are only unlocked by finishing their master level duels (one-on-one events). There’s also one — a big rig — who can only be obtained by going into the game’s Thomastown free roam arena and finding ten ‘hidden’ hats. There, you will also find a host of challenges and minigames, including some that require more than one player.

When it comes to track selection, Cars 3: Driven to Win continues to be a mixed bag. Although there are a decent amount of new courses to be found, few of them have much in the way of memorable facets. They do the job, have their moments and provide some entertainment, but they won’t remain in your memory long after you’ve put the controller down.

What’s most telling about this game — which seems to have been rushed — is how different the quality level is between its native tracks and the Cars 2 returnees that make an appearance within. The Cars 2 courses are much better, and show a lot more creativity, not to mention greater levels of both detail and polish. This is what I remember from the game itself, and what I was expecting from this follow-up.

Each course has what you’d call racing strips, which offer different ways to earn bonus nitro. There’s your basic drift strip, which gives you boost juice when you drift over top of it, but there are also a couple of others, including one that requires you to drive backwards and another that rewards you for driving on two wheels. Boost is an important asset in Cars 3: Driven to Win, and you’ll want to take advantage of it as much as possible. Keep in mind, though, that it’s best to hoard your nitro until it reaches max level, because doing so will allow you to go “in the zone,” which is a flashy term for a faster and lengthier boost. One that acts like Mario Kart‘s star, in that it harms any racer you come into contact with.

Then again, any time you drift, drive backwards or go on two wheels, you’ll gain nitrogylcerine. As such, some folks will simply opt to drive backwards at almost all times.

It’s also important to note that this is a multiplatform and multi-generational release, meaning that not only is it available for Xbox One and PlayStation 4, but Nintendo Switch, Wii U, Xbox 360 and PlayStation 3 as well. This shows in its visuals, which aren’t very spectacular. Many of the textures look dated, and even still the game doesn’t perform perfectly. I don’t want to blow things out of proportion, though, because it runs well for the most part. You’ll just run into a couple of frame rate issues every once and a while, and see some visual anomalies.

The cars look quite good, though, and feature voices that at least sound similar to those from the film. I doubt that they actually got Owen Wilson to voice Lightning, but the guy who takes his place has done a good job of mimicking his voice. The voice acting fares better than the music does, however, as that will have you wishing for custom soundtracks or hitting the mute button altogether.

At the end of the day, Cars 3: Driven to Win is a middling effort that feels more like a cash-in than ever before. It’s possible that a tight deadline caused the team at Avalanche to have to rush development, but I can’t say for sure. It definitely feels like it, though, because this thing isn’t nearly as good as its predecessor was.

**This review is based on the Xbox One version of the game, which we purchased.**