NOTE: Some spoilers from all five episodes of, “The Walking Dead: A New Frontier” are present in this review

The Walking Dead: A New Frontier has somewhat struggled to maintain the incredible drama and momentum from its first two standout episodes. Fortunately however, Telltale Games’ latest post-apocalyptic narrative adventure game series at least manages to close out on another high note, presenting a final episode in, “From the Gallows” that provides lots of excitement and intensity, even as it moves away from the villainous forces of the New Frontier.

An especially big plus in this episode is the fact that your past decisions now once again have much more apparent bearing on events, compared to the previous episode especially. This naturally comes with multiple ending possibilities that can see various characters living or dying for the end of the story, as you may expect, while also shaping Javier and Clementine into different heroes, anti-heroes or outright thugs, as the game ends with the promise that Clementine’s story at least isn’t over yet. Fortunately, that announcement feels like a great promise and not any kind of disappointment, seeing as the conclusion of Clementine’s story arc in particular here does set up plenty of promise for the inevitable fourth ‘season’ of The Walking Dead that’s certain to come from Telltale over the next couple of years. 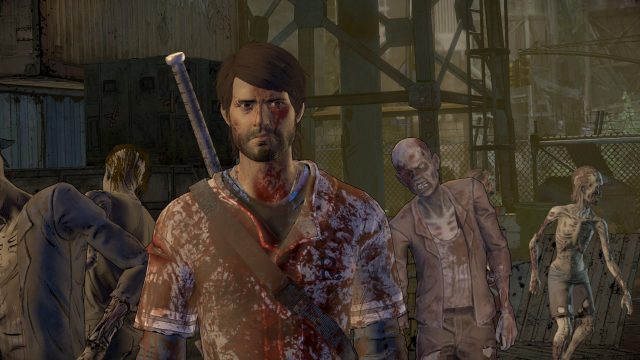 Obliterating the New Frontier as a threat, after Kate crashes a truck that unleashes a massive herd of Walkers on the settlement, also allows the episode to revolve entirely around its surviving leads, with the act of survival itself fittingly being the greatest obstacle now. Javier and the other characters are left to re-examine the choices that led them to this horrible incident, and whether they even care about trying to fix it. As with many of the best episodes of The Walking Dead from Telltale, there aren’t any clear right answers here either. There are cases to be made for condemning the innocent citizens of the New Frontier and leaving them to their grisly fates, just as there are also legitimate cases to be made for standing against the seemingly impossible odds of saving the camp’s people from the Walker hordes.

The only time that the choices do falter somewhat in this episode is regarding the big cliffhanger ending from the previous episode, which, disappointingly, was the best part of the previous episode. Regardless of whether it was Tripp or Ava who ultimately met their end at Joan’s hands with the conclusion of the fourth episode, there aren’t any noteworthy consequences or altered storylines here in either case. Instead, the story of the episode proceeds the exact same way, whether Tripp or Ava is with you, with only minor dialogue changes altering the scenario of facing the person you apparently betrayed just moments ago. This is a considerable let-down, since one of the biggest decisions of the previous episode is suddenly rendered moot in this one. Even whether Clint or Joan was ultimately killed at the end of the previous episode is irrelevant (one of them always survives), and it feels like the fallout of either turn is intentionally being withheld for that inevitable fourth The Walking Dead season to come.

Even without proper villains in, “From the Gallows” however, the intensity still never lets up from start to finish. The first half of the episode proceeds in largely the same relative progression, though Javier’s former dialogue and actions play into some surprising developments early on, to keep things interesting. Speaking of that, we also get a much better flashback from Javier’s end to start the episode with, as we get to see a younger Javier and David interacting with their still-living father before the Walker apocalypse, when they first learn that he has terminal cancer. This effectively provides more context and drama to the tense brotherly relationship between Javier and David, including why David was so genuinely unstable in the flashback that kicked off this game series’ very first episode.

Once this episode’s climactic portion kicks into gear though, that’s when you truly decide what kind of man Javier Garcia really is. It’s not just a matter of deciding the fate of the New Frontier camp either. Other surprising developments with your lead characters will force you to make some very tough choices for Javier. Another interesting hook is that the choices may change, depending on Javier’s relationship with Clementine, and whether or not Clementine has come to like or respect Javier over the course of the previous episodes and this episode. This is very cool, and can drastically alter the game’s ending in some unexpected ways, especially since Clementine-related decisions from Telltale’s previous The Walking Dead games can also influence how she ultimately perceives Javier in this climax. Naturally, where Javier and Clementine decide to place their loyalty will radically affect who lives and who dies between the other leads, among other sizable story changes.

Considering the merely decent third episode and the typically disappointing fourth episode, it’s great to see The Walking Dead: A New Frontier at least end on a high note with its fifth and final episode. Your past decisions with Javier have some great story-altering consequences here, even if the fallout from the previous episode’s big cliffhanger ending quickly becomes irrelevant. The especially ambitious execution with this game series’ ending though, especially when all of your former choices with Clementine ranging all the way back to Telltale’s first The Walking Dead game’s events come into play, is a huge highlight, especially when it lays out even more promise for the fourth season that’s clearly on the way for these games. Telltale spells out in no uncertain terms before the credits that Clementine’s story will continue, and I doubt this will be a shock to anyone, though what truly matters here is that the story of Clementine still ends up being great as ever with its latest big consequences for the New Frontier camp, and Javier’s family. Considering this standout conclusion to Telltale’s latest The Walking Dead adventure especially, I can’t wait to see where Clementine’s tale takes her next!

This review is based on an Xbox One copy and PC copy of, “The Walking Dead: A New Frontier”, both provided by Telltale Games.