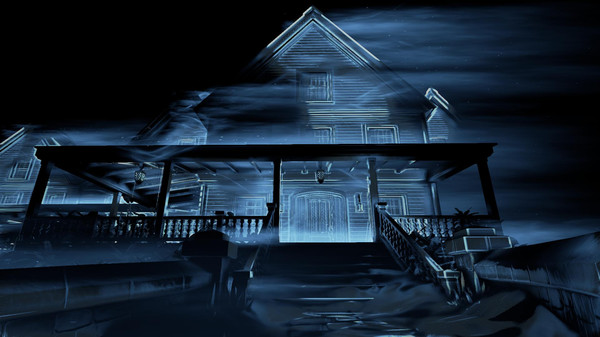 It is said that those who are blind and cannot see usually tend to hone their other senses, thus making them stronger and more reliable than what the general population possesses. This makes sense, given that folks who live with visual impairment must rely on their other human senses (like touch, hearing and smell) in order to help them navigate the world during their day-to-day lives. After all, what we take for granted — that being the ability to see our surroundings and any dangers that lay within them — are things that those folks are unable to take advantage of.

Since video games are a predominantly visual medium, it’s rare for a developer to base one around a character who cannot see. A small amount have tried, though, including this month’s Perception, which comes to us from The Deep End Games. A spooky tale, it has us making our way through a dark, desolate and haunted building using echolocation.

In this slightly unique, but very pedestrian spook show, we take control of Miss Cassie Thornton and assume her first-person viewpoint in the process.

After being orphaned at a young age, the now grown up young lady is dealing with recurring nightmares about one particular house. In these dreams, she’s been able to pick out certain items, such as a piece of rope, an apple and an axe, although their meanings are unknown to her. Nothing seems to make them stop, though, and their unsettling nature has provoked her to venture to the residence, which resides on a rural acreage in Massachusetts.

This familiar, albeit somewhat absurd plot acts as the backdrop for what goes down over the course of Perception‘s four hour run time. As such, enjoyment requires one to remove his thinking cap, so as to avoid obsessing over the peculiars, such as how Cassie knows the exact location of the home. Overthinking about this game will only make your head spin.

After a short introduction, wherein Cassie’s past is briefly skimmed over, the lass talks about the nightmares and what prompted her to take a bus from Arizona to Massachusetts all by her lonesome. It’s after this where we find her standing outside in the cold of a harsh winter’s snowstorm, with her feet planted on the home’s driveway. Here, control is given to the player, who gets to help the character open the door and enter the building she’s been fretting about in dream state.

Although it’s not all that creative, the premise behind Perception is at least interesting. What’s most disappointing, though, is that the game never manages to take advantage of it in any special way. Instead, this four hour walk through a dark and scary house ends up being far more disappointing and meandering than it could have been, and turns out to be little more than a series of fetch quests. In fact, most of the time the item that you need to locate is highlighted in white, allowing you to easily walk to it from wherever you may be.

Cassie’s lack of sight comes into play right from the get go, and it affects how you traverse (and explore) this old, labyrinthine mansion. You see, since she cannot visually look at what’s around her, Cassie must instead take advantage of echolocation. This means tapping her cane all over the place, in order to see what’s in front of her through the reverberations. In what is surely an unrealistic fashion, this mechanic lets the player see everything that exists around Cassie, but only within a small radius. As such, you’ll need to repeatedly tap your cane in order to get a good look at each and every room and exterior location.

As you make your way through each of the game’s four chapters, you’ll learn about the house and the unhinged folks who’ve inhabited it since the mid-1800s. First, you’ll get to know a young doctor and his pregnant wife, who’s perhaps under the effect of too much medication. Afterwards, you’ll learn of a troubled inventor, a deeply religious and almost cultish man, and a lady who misses her husband so much that she wants to go to war with him. It’s an eclectic mix, for sure, but their stories and involvement in the house’s lore still leave something to be desired, as does everything else.

During each chapter, Cassie must walk from one room to another (using her echolocation ability and the white goal marker), picking up different items, letters and audio recordings along the way. While white marks your goal, green is also used to highlight important things, such as fireplaces and doors that can be opened or will open themselves at some point in time.

Whenever the player comes across a letter (of which there are far too many), Cassie will interact with them in different ways. Many of these written ledgers will automatically narrate their text to both the young protagonist and the players who control her, but some end up forcing her to use text to speech software on her phone. The latter makes a lot of sense, but the former is almost nonsensical and cheapens the experience.

As she traverses the halls and gets to know the home’s deceased former residents through their text and voices, Cassie also comes into contact with blue, ghost-like apparitions of those same folks. She’ll see them float around and perform actions that depict what they did and what they went through during their time in the desolate mansion, and will also hear them speak to others. This is where a large part of Perception‘s supernatural element comes into play, though these spirits are not alone. You see, the developers have also added an entity whose only purpose is to act as a consequence for making too much noise.

While it goes without saying that Cassandra’s cane creates noise every time it’s slammed to the ground or off of something (after all, she does use echolocation to get around), causing too much noise will alert the house’s monstrous spirit, causing it to come after and attempt to kill you. This wholly unnecessary mechanic brings to mind both Outlast games, as not only must players walk (or run) away from this danger, they can also choose to hide in closets, chests or bath tubs and wait the thing out. Hell, you can even hide under beds.

The entity (which turns the world red when it comes near you) does provide consequences for overusing the echolocation mechanic, but other than that it’s nothing more than a half-assed attempt at trying to flesh out a one trick pony. The thing doesn’t even come into play all that often, and that alone makes it almost pointless. I also say that as someone who used the cane quite a bit (more than a thousand times, in fact). It was only when I slammed the thing down multiple times in a row that the spirit appeared, and even then it took a lot for it to come.

Still, Perception can be unsettling, especially since you’re playing as someone who cannot see as they walk through a dark and haunted house wherein many former residents led very troubled lives. It’s merely unsettling, though; not scary. Although the potential for a very memorable and incredibly scary game exists here, it’s hardly taken advantage of.

Continuing on, I’d be remiss if I didn’t mention how absurd the third (and by far the worst) chapter is. It stands out most for its questionable design and related decisions, because for some reason the developers decided that throwing moving dolls into the mix would make the game better. Not just moving dolls, either — ones that talk and shoot. Yes, you read that right: In a chapter that takes place during the later 1800s, there are dolls that can not only speak to you but also shoot at you at will, using miniature pistols. You’ll need to avoid their sight lines and sneak past them in order to survive, because Cassie can only take a few bullets before she bleeds out. Dying can also lead to frustration, due to checkpoints that are sometimes too few and far between.

For the most part, the storylines found in the first, second and fourth chapters of Perception make sense, although you’ll need to accept some supernatural storytelling elements in order to truly get into them. The third one, though, is a mess. It offers some interesting intrigue, but fails to come together at the end and left me wondering what the Hell I’d just experienced. The dolls were truly the worst part of it, though, and the game as a whole. They not only created unnecessary frustration, but also cheapened the experience by making it feel silly and gimmicky.

The main problem with Perception, however, is that it just isn’t all that fun. It makes you go through the motions over and over again, but never really delivers on any of its promises. There are things to like about it, such as how the house changes for each chapter’s different time period, but so many of its mechanics (and design decisions) fall flat on their proverbial faces. It doesn’t help that the supporting cast — who show up in occasional phone calls, including ones where an app calls a random person to help decipher pictures that Cassie has taken — feel like afterthoughts who aren’t organically tied to the narrative. If her boyfriend and the app’s aide weren’t involved, the game wouldn’t feel much different.

I guess it goes without saying, but this one isn’t much of a looker. Then again, that’s somewhat understandable given who its main character is and how she gets around, though it still needs to be mentioned. Things are dark unless you move, use your cane or happen across a TV, radio or fan that just happens to be in working order for some unknown reason. When lit up, the game’s basic colour palette also doesn’t do the house a ton of favours, though it works given the narrative and the protagonist’s limitations.

Cassie’s voice acting is also solid, for the most part, although she can sometimes get a bit annoying. You have the option to turn her comments off at the start of the game, though, through a choice that asks you if you’d prefer a “Chatty Cassie” or a silent one. I went with the former, because I wanted to experience the title as it’s meant to be played, but the option is there for those who’d prefer a less vocal approach.

As with any haunted house game or movie, sound plays a major role here. Doors slam, things creak and odd noises attempt to both startle you and keep you on your toes. The overall sound design is decent, just like the voice acting is, but it’s not groundbreaking, nor does it have enough variety to really stand out. Then again, this isn’t a big budget game, so you’ll need to temper your expectations a bit before going in, if you choose to even bother.

At the end of the day, video games are meant to be a fun escape, and primarily exist for enjoyment. Fun games succeed both critically and commercially, whereas those that aren’t so enjoyable tend to not do so well. Unfortunately, Perception falls more into the latter category than the former, because it’s lacking in gameplay, variety and enjoyment. While there are some scary moments to be found within, they’re few and far between, and the core game experience feels undercooked, especially since it mostly boils down to a four hour-long series of fetch quests.

I hate dumping on an indie game that tries to be different, but there’s just not enough here. Plus, at a $20 price point this one is awfully expensive for what it is.