NOTE: Full spoilers for this episode of, “Preacher”, including a major character death, are present in this review

Preacher sure hit the ground running with the insanity in yesterday night’s Season Two premiere, with the show’s new extra zany direction especially feeding into the second of two season premiere episodes for this week tonight. “Mumbai Sky Tower” gave us a fun, inspired and ultimately tragic reunion with one of Season One’s recurring characters, even if the episode did have to get out of an awkward corner that it wrote itself into, due to the seemingly inescapable problem of the previous episode’s cliffhanger ending.

That problem comes via the Saint of Killers cornering Jesse in his hotel’s parking lot, and Jesse realizing that Genesis has no effect on him. In order to get out of this, the show has to contrive a positively ludicrous series of events, even by the standards of Preacher, which involves a truck just barely saving Jesse from a bullet before crashing into the Saint, before Jesse commands a parade of gun nuts that just happen to be packing the hotel to unload on the Saint, before the Saint starts murdering everyone throughout the entire hotel (for some reason), while Jesse, Tulip and Cassidy try to hide in the vending machine area, while a one-armed man complains about getting the wrong pop, seemingly oblivious to his horrific injury. As much as the weirder direction of Preacher’s second season has worked well so far, this awkward intro represented the show completely flying off the rails, and having to do whatever it felt it had to in order to get Jesse and co. back on the road, and successfully escaping with their lives.

Fortunately, once this problematic opener is out of the way, the episode gets a lot better, as Jesse’s crew finds themselves headed to the Mumbai Sky Tower in Las Vegas, where Fiore happens to have ended up as well. Remember Fiore from Season One? Turns out, he stumbled into a successful stage act after it was accidentally discovered that he re-appears whenever he’s killed, leading to Fiore passing himself off as a supremely skilled stage magician. This felt like a more funny and effective way to capitalize on Preacher’s surreal humour, since Fiore’s fate is delightfully strange, but also undeniably logical in a perverse way.

Thanks to Cassidy seeing Fiore on TV back at the hotel that the Saint of Killers ravaged, Jesse and Cassidy are able to meet with him in his dressing room, while Tulip hangs out at the bar. It’s here that Fiore reveals that he’s the one who brought the Saint of Killers after Jesse, and is refusing to call him off. Fiore is clearly grief-stricken over the death of DeBlanc last season, and Jesse mistaking Fiore for DeBlanc definitely didn’t help matters. Fortunately, Cassidy has his own idea to get Fiore to co-operate in the search for God, namely by getting him high off his ass on a whole lot of heroin! This led to one of the episode’s best and funniest sequences, as Cassidy accidentally ‘kills’ Fiore with a heroin overdose to start, though after he levels out the dose upon Fiore ‘respawning’, the two have a grand old time that sees them bonding as best friends, leading to Fiore finally agreeing to help Jesse and call off the Saint of Killers. 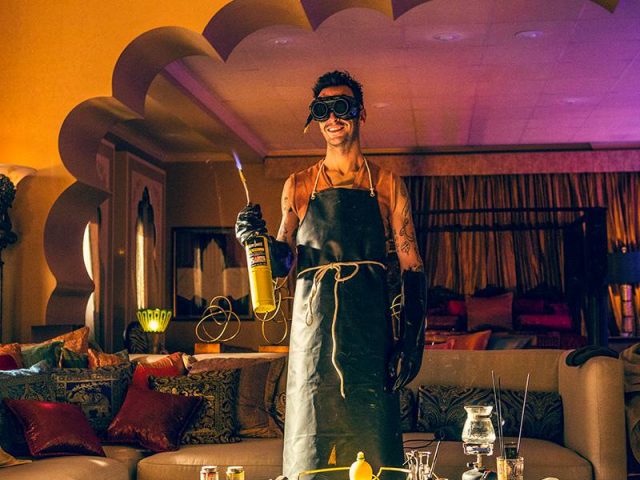 While this is going on, Jesse and Tulip decide to take some quality time while they wait for the Saint of Killers to make his way to Las Vegas, and this naturally leads to them having sex, and Jesse eventually deciding that they should get married at the nearby Vegas chapel. He initially talks Tulip into the idea without having to use Genesis too, especially after the two finally learn of Annville’s destruction during the episode’s opening, which, honestly, did feel a little awkwardly shoehorned into the episode, without much real drama being explored beyond one fairly emotional story from Tulip. Regardless, Tulip eventually changes her mind when she runs afoul of a thug from her past, whom she seemingly kills in her room, with Cassidy stumbling onto the scene before Tulip demands he not tell Jesse. This is bound to come back and haunt Tulip sooner rather than later, and it looks like we have a pretty promising Tulip subplot to look forward to before long.

Obviously, Jesse doesn’t get rid of the Saint of Killers that easily either, despite Jesse motivating the gang to take off early to head to New Orleans, after putting together that God loves jazz, in a point from the previous episode. The end result of the Saint’s latest stop is pretty effectively tragic too, as Jesse tells Fiore to, “Find peace” before he leaves for New Orleans, which has the unfortunate consequence of having Fiore refuse to give up avenging DeBlanc, while also telling the Saint of Killers to kill him for good on stage. Because the Saint follows through and Fiore is shot dead by the Saint’s divine bullets, to the booing of an oblivious audience, Fiore did find peace, though at the cost that the Saint can never truly be called off now. It’s interesting that Jesse’s one attempt to be selfless with Genesis so far this season ended up creating a world of trouble for him, and the episode ending with the dead Fiore having, “Found peace” was a poignant way to end an episode that was otherwise more fun and less squeamish than the actual season premiere episode from last night.

On one last note, it is explained in this episode that the Saint of Killers psychically determines Jesse’s location whenever he uses Genesis, which does sort of explain why the Saint keeps showing up wherever Jesse goes. I must say that this still raises a few questions though, namely why the Saint still has to bother asking for directions (and killing innocent bystanders), and why the Saint would have an inexplicable psychic connection to Genesis in the first place. Still, if the source comics are any indication, this will probably be fleshed out down the line.

Whatever the case, past its problematic opening portion, “Mumbai Sky Tower” made for a pretty fun and clever episode of Preacher, even if it feels like it largely exists to merely lighten the show up a bit more, and fully resolve the lingering Fiore fallout from last season. With Preacher now firmly sitting in its new Monday night timeslot, so as not to interfere with the delayed third season run of Fear the Walking Dead on Sunday nights, we’ll have to start waiting additional weeks to see where Jesse’s road trip takes him next, but the next destination of New Orleans does present plenty of potential for next week’s stop!