Although Telltale is best known for its gripping and immersive take on The Walking Dead, that’s not the only great game to have come out of the studio in recent years. Though there have been some slight stumbles, like Minecraft: Story Mode and Game of Thrones, most of the developer’s output has been good to great as of late. That, of course, includes their games based on Marvel’s Guardians of the Galaxy, Gearbox Software’s Borderlands and DC Comics’ iconic Caped Crusader.

Picking up where it left off, this first episode of The Enemy Within continues to focus on Bruce Wayne’s inner turmoil as he deals with the knowledge that his beloved father was, in fact, a criminal who practically ran Gotham through immoral means. There’s more to it, though, since lots happened last time around. Fantastic mayoral candidate Harvey Dent went crazy and became Two Face, Selina Kyle stole our hero’s heart before leaving town in a hurry, Lady Arkham terrorized the city, and the Joker became our unwanted friend during a brief stint in a psychiatric hospital.

Now, with “The Enigma” — which is what they’ve appropriately dubbed episode one — Mr. Wayne finds himself up against another unexpected adversary: The Riddler. Now middle-aged, and sporting salt and pepper hair, Edward Nigma has returned to Gotham City after a lot of time spent in hiding. Yes, in this take on the iconic comic book narrative, The Riddler is an older character who originally terrorized the city back when Bruce’s father was acting as one of its criminal puppeteers.

Things begin in a casino, where Batman is keeping tabs on a scumbag while wearing fancy dress clothes. It isn’t long, though, before the shit really hits the fan thanks to the surprise return of Mr. Nigma. Saying much more would spoil the fun, but there’s lots to look forward to during this action packed opening and its introduction of more advanced combat via combined button prompts.

What’s great about “The Enigma” is that it starts with a bang and makes you feel like a badass from the get-go. However, what’s not so great about it is how it fails to reach those same heights during the rest of its two hour runtime. It starts quickly, gets your juices flowing and then simmers for a while before things really pick up again.

Between its opening and closing credits, the beginning of Batman: The Enemy Within tasks players with managing relationships more than its predecessor ever did. In fact, as the credits roll you’ll be treated to stats pages that show the exact status of each important relationship, be it the one between Batman and Commissioner Gordon, or the one between our hero and the newly-introduced head of “The Agency,” Amanda Waller. A brash, no-nonsense FBI type, she and her shadow organization quickly swoop in to take control of the Riddler investigation.

Those who like to see how their choices stack up against other players’ can still do so, but the stats page focuses on relationship statuses before heading into that territory. Thus, it becomes obvious that how you treat others will play an even larger role this time around, which makes the wait for the remaining four episodes even longer.

What’s nice is that there’s more to the relationships than just “Great,” “Good” and “Bad” ratings. In fact, those words don’t really appear. Instead, you will see “Strained,” or other similar descriptors. Each encounter with said person is also documented, showing how your choices at each interval altered their opinion of you.

Lots certainly happens during this heroic return, but sometimes that’s to its detriment. Cramming so much (The Riddler, Alfred, Waller, John Doe, Bruce’s father’s past and more) into one episode has hurt its pacing and lessened the appeal of something that started out great and could’ve been that good throughout. Still, that doesn’t mean that this is a bad episode, or that it’s anywhere close. It just isn’t everything it could have been, despite starting off as something that made me think, “Wow. This is going to be amazing.” There’s definitely lots to like, but some tedious detective work takes the fun out of certain sections.

Here’s hoping that Telltale will improve the pacing for episodes 2-5, because there’s potential gold here, and it’s fair to hope for such given how good the first season was. Sometimes less is simply more, though.

Moving on, the developers definitely do deserve credit for making the combat more lively, by using lots of multiple button inputs and giving players options as to how they’ll approach each situation. For example, I was once given the choice of tackling an enemy or soccer kicking him, to which I enthusiastically picked the soccer kick.

Then again, who wouldn’t? 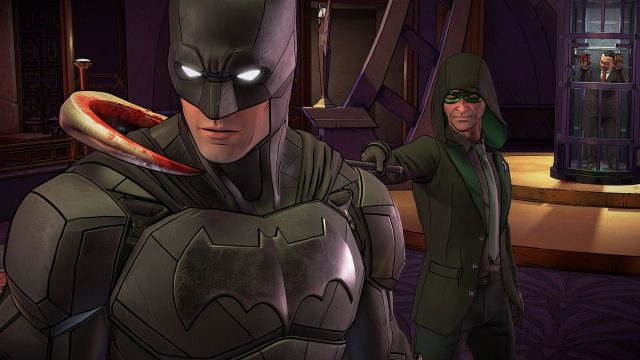 Finally, what’s perhaps best and most impressive about Batman: The Enemy Within – Episode 1: The Enigma (man, that’s a mouthful and it’s not even the game’s full title) is how good it looks, how nice it sounds and how well it runs. Gone is the familiar ‘Telltale jank’ that people have named and complained about ad nauseam over the last however many years, and in its place is a game that runs very smoothly. One that has a great art style, quality voice acting and a very good soundtrack.

Though it has some kinks to iron out, Batman: The Enemy Within has begun with a quality first episode that only really suffers from easy to address issues. Sure, it’s not as good as it could have been, but it sets the table for a really interesting and in-depth season, and features some really unexpected events that aren’t likely to be forgotten anytime soon.

**This review is based on a copy of the game that was provided to us by its developer. We reviewed it on Xbox One. Stay tuned for reviews of the following episodes.**

Batman: The Enemy Within - The Telltale Series - Episode 1: The Enigma Review
Batman: The Enemy Within begins with a bang, but doesn't maintain that level of quality throughout its two hour-long runtime. Lots happens, though, including some major events and surprising reveals.
Storyline82%
Audio86%
Visuals82%
Gameplay71%
The Good Stuff
The Not-So-Good Stuff
2017-08-16
79%Overall Score
Reader Rating: (0 Votes)
0%