Sea of Thieves was supposed to be the triumphant return of the brilliant minds at Rare. The same minds that brought us great games like Banjo-Kazooie and 007: GoldenEye. The developers of near-flawless shooter Perfect Dark and hilariously badass Conker’s Bad Fur Day. Then again, they also brought us Kinect Sports and its follow-up, Rivals.

Okay, okay, Sea of Thieves isn’t that bad. In fact, its a perfectly serviceable game. When it works. But let’s start at the beginning.

Sea of Thieves is a shared-world adventure game that allows players to take to the seas and live on the high seas as a pirate. The game looks beautiful, pirates are varied and styled in very unique ways, and the world has a cartoony realism about it that fits the mood perfectly.

The title is based entirely around your pirate crew and your interactions with them in the game world. Work together to be successful: assign one pirate to steer the ship while someone controls the cannons and someone else deploys the main sail, while perhaps the fourth is stuck in the brig for eating all the bananas. It’s a beautiful finesse of character roles and tasks and it works exactly as it should so long as one condition is met: everyone does what they’re supposed to with little deviation. Have three friends who aren’t taking the game nearly as seriously as you are? Good luck against a pirate crew that has a bit more drive to sink your ship. 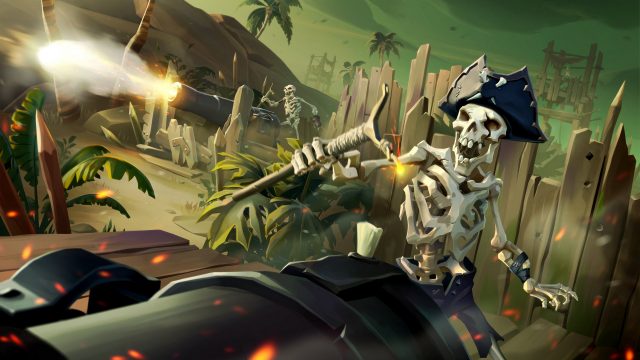 Your crew can sail the seas on a multitude of quests, including the requisite fetching to secure loot and treasures, animals, and even tracking down ghost pirates. But there are so many quests. And they’re all virtually identical. The game, barely a dozen hours in, becomes a repetitive mess of fetching and fighting, rinse, and repeat.

Granted, this sounds like a typical level-up system in any number of games from Destiny to Battlefront. However, the upgrades you obtain throughout the numerous quests are purely cosmetic in nature and deliver no change to your firepower as a pirate.

The flip side here is that it makes it very easy to enjoy the game on a very casual level. It’s not entirely difficult to walk around a stunning series of environments just for the sake of doing so. That isn’t really the point of the game, though.

There’s a very clear and wonderful sense of care in Sea of Thieves, one that contributes to its humour and ambitious feel. Small touches such as holding your map up as you walk and chowing down on a banana as if that’s the only way pirates regenerate health in the game are childish, funny touches that make the game what it is. And the water is some of the most beautiful water in any game. Ever.

Getting your team together isn’t the hardest thing in the world as Xbox Live has been the most robust platform for online gaming for a long while. However, with no drop-in/drop-out co-op here, an entire session has to be halted if another player wants to join. This has been a non-starter for years now, and a game that is so reliant on co-op partnerships to make it work not having this baked right in seems to be a huge oversight, or a bizarre technical limitation that should’ve been overcome after three years in development.

The world here is the game’s saving grace, and it really is something to behold. It feels empty at times, sure, but there is quite a bit of variety in landscapes, characters, and loot to behold. With consistent content updates and patching, the game could very well evolve into a much grander experience, but for now, it just doesn’t match up to the Rare games of yesteryear.

Sea of Thieves Review
Sea of Thieves is a love letter to the days of split screen gaming in which players could work together for a common goal. In the online world, however, headsets and couches in different rooms around the world are no match for that experience, and in very rare cases (no pun intended) does the game become the successful team strategy title it desires to be.
Visuals85%
Audio85%
Gameplay45%
Storyline55%
The Good Stuff
The Not-So-Good Stuff
2018-04-15
65%Overall Score
Reader Rating: (1 Vote)
75%