Milestone certainly loves its off-road vehicles, especially those of the two wheeled variety. Not only has the company released the arcade racer, Gravel, the arena-based Monster Energy Supercross, and the more realistic MotoGP 18 this year, they’ve also just launched MXGP Pro in North America. That’s not even counting Ride 3, which is also expected to release during 2018.

Needless to say, games based around dirtbikes, motorcycles, rally cars and mudding trucks are this Italian developer’s ‘specialty’ and passion. Specialty is put in quotes for a reason, though, and that’s because while they give us lots to play, their games tend to lack that extra level of polish, detail and finesse that the best racing games possess. This is likely due to a lower budget, but it’s also very possible that their high rate of turnover has something to do with it as well.

Is MXGP Pro, the latest of the Milestone bunch, much different? Unfortunately not.

As the fourth game in a series that just came into existence in 2014, MXGP Pro essentially stands as this year’s iteration. After all, both 2016 and 2017 saw the release of MXGP 2 and MXGP 3. These things are really becoming like the more traditional sports games, which maybe isn’t the best business model for them.

Prior to its late June launch in Europe and recent release on our shores, this game was talked up to the Heavens by press releases that touted its reworked physics, professional rider involvement and increased realism. It’s the latter that was the key word, though, that being realism. MXGP Pro is said to be by far the most realistic game in the series, and the result of lots of fan feedback that was taken to heart. While this is likely true (I can’t say because I didn’t play the previous games), it’s still held back by dated physics, repetition and a barebones feature set.

After a longer than average title screen, which includes a loading wheel before you can even press start, this particular title then shows another loading screen as it draws forth the resources that power its Compound map. That is, a practice track that is set within a wooded area and features some pretty impressive lighting. It’s here where the tutorial takes place, prior to players being sent to the main menu and left to their own devices. Advanced tutorials are also available, and they cover all of the game’s advanced techniques, many of which are handled by the right joystick. This includes how to control one’s bike in the air (to position it so that you’ll land with an advantage), how to use the bike’s two individual brakes and things like that.

It’s true: MXGP Pro does have some pretty advanced handling mechanics that the hardcore crowd (and longtime fans) will appreciate. It also offers an extreme option that locks its settings to the most realistic ones possible and also prevents people from using its rewind feature. I’m not one of those folks, though, and was happy to discover that the game was accessible in its base form.

When you come to the rather simple and forgettable main menu, you’ll be given a couple of options, those being single player or multiplayer (which is listed as Xbox Live on the Xbox One console). Selecting the latter will either allow for a quick or custom match, that being an online race against others. If the event it finds is in action, you’ll have to wait and watch those taking part. 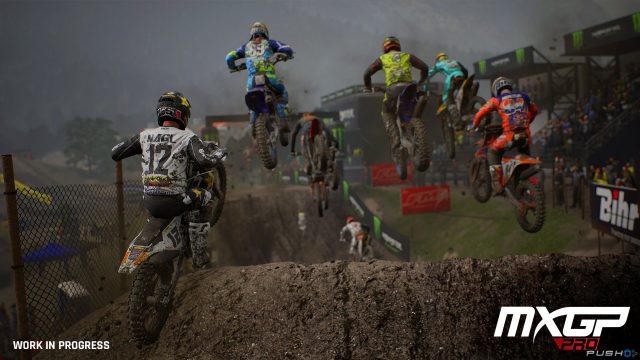 The single player setting, on the other hand, is where you’ll find Career, Time Trial, Grand Prix and Championship modes, the latter three of which allow you to pick which tracks you’ll race on. Custom championships can be created, ghosts can be raced and times can be set, but it’s the career mode where you’ll find the bread and butter of this iteration’s dirt-based action. The problem is that, while it at least tries to be interesting, it’s little more than a series of about 19 different events that you must first do in the MXGP2 class and then do again in the MXGP class. At least, that’s what I gathered from what I read about the game and what I played (because it told me that, once I hit a certain popularity level, I could jump to the next class.) The reason I cannot say for sure is that the game glitched to the point where I was unable to continue my career after a certain point. We’ll get to that soon, though.

Career mode allows you to create and use your own avatar, and rewards success with credits as well as points on its leaderboards. Those credits can then be used in the in-game shop, to purchase new helmets, racing suits, goggles and more. Things are expensive, though, so don’t get the idea that it’ll be easy to buy new gear at will.

As per usual, you pick your sponsors (for almost every individual part of your bike) and these sponsors set certain objectives, like finishing the tour in sixth or better, or completing three laps without falling. Achieving these goals then provides more credits and prestige. This isn’t anything revolutionary, nor is it original. The only thing that’s remotely original about MXGP Pro‘s career mode is its rider rivalry system, but even that is basic. It feels as if the developers realized, too late, that they needed to add some personality into the thing and the only idea they could come up with was this. That is, a system in which three different opponents will Tweet after every event, allowing the player to respond in a positive, negative or neutral fashion. How you respond can make them rivals, but that doesn’t seem to affect much. You do, however, get extra points for reacting negatively, which is kind of funny.

The racing, itself, takes place on close to twenty real life tracks from the sport’s repertoire. They’re located all around the world and can be played at will in certain modes. These courses are quite well designed and replicated, and offer some pretty impressive terrain deformation in the form of mud, ruts and puddles. Said ruts, divots and damages will affect your traction, control and the like, and tend to be at their worst during the second race of each event. Appreciably, the damage from one race carries over to the next, which is as things should be. And, as you can surely imagine without me saying anything, weather can factor into this.

While the controls and physics do feel more responsive and realistic than they did in Monster Energy Supercross, there’s still a lot of room for improvement. Inconsistencies can lead to crashes one time and absolutely nothing the next, and it’s difficult to tell how far you can lean without falling over because it never feels constant. Furthermore, some of the jumps, crashes and moments of general racing don’t feel super realistic. This is especially true of the riders’ animations, because it’s as if they’re glued in one position until they fall, and even then they don’t act realistically.

There’s a good sense of speed to be found here, too, but it can get out of hand at times. Then again, I guess that’s why the rewind feature is there, because while crashing is sometimes too easy to do, making it as if said fall never happened is even easier.

Although it took some time to get into, and to get used to as well, I eventually found myself enjoying MXGP Pro a decent amount. As such, it was going to get a higher review score than it is now. Unfortunately, the ability to properly score and review this game was taken out of my hands by a major, progression blocking glitch, that occurred while I was playing tonight. A glitch that appeared after my third time updating this digitally provided title.

Things were fine for the maybe two and a half hours that I played this thing prior to midnight. Then, when I went to enter the Czech Replublic’s MXGP2 career race, the screen went black and I was sent back to the console’s dashboard. At that point, I launched the game again, waited for it to load, and tried the same thing (by asking it to load my career), just for the same glitch to occur again. It happened a third time, before I decided that I would test things out by trying to play a Grand Prix event on that course. Well, lo and behold, that caused it to crash again.

Though I’d been planning to complete this game before deleting it, it seems that I won’t be able to. I don’t feel like restarting my career after already winning twelve or thirteen events (all of which make you complete two races, even though the options menu says that only doing single races is an available choice). Even if I was to redo those several hours of gameplay, I would have no idea as to whether the glitch would occur again. There’s no guarantee it wouldn’t. So, after careful consideration, I decided to delete it and move on to something I like better. I need to do something about my massive backlog anyways.

It’s a shame, because MXGP Pro isn’t a bad game and was actually pretty enjoyable despite its flaws, lacking feature set and somewhat dated existence. The tracks, terrain deformation and lighting all look quite nice, as does the dirt that flies out from one’s wheels. Hopefully Milestone can figure out what’s causing this bug and address it soon.

MXGP Pro Review
When it works, MXGP Pro can be pretty fun. It's flawed and a bit dated, but it has more pros than cons. Unfortunately, the game is glitchy and put a premature end to our progress.
Visuals75%
Audio74%
Gameplay68%
Storyline27%
The Good Stuff
The Not-So-Good Stuff
2018-07-11
60%Overall Score
Reader Rating: (0 Votes)
0%