Preacher really started to hit a high note for its already strong third season last week, but this week’s season finale truly went above and beyond in terms of wrapping up all of the current story arcs on the show, while in turn setting up for a very exciting potential fourth season. “The Light Above” held the series’ tradition of being a very bloody season finale, with many established characters dying by the time things conclude, and not just the folks in Angelville either! Even beyond that expected direction however, the storylines remained fun and wholly satisfying, continuing to represent Preacher at its very best!

The expected confrontation with Gran’ma and the forces of Angelville definitely didn’t disappoint, particularly as Jesse immediately gets to work exploiting Genesis to get the upper hand against his ‘family’. After coercing T.C. into shooting himself in the foot (which the episode just seems to weirdly forget about in the next scene?), Jesse then confronts Jody, who goads him into forsaking Genesis in order to defeat him in a fair fight in the Tombs. This moment actually effectively echoes the adversarial, yet strangely passionate relationship between Jesse and Jody from the source comics, wherein Jody was a tyrant to Jesse, but often acted in such a way in the name of making Jesse stronger. Jesse eventually does brutally beat Jody to death in the TV adaptation as well, though not before Jody gets up one last time to say, “Proud of you, boy.” It was a perfectly executed final confrontation, and the ambiguous fate of T.C., who stays behind as Jesse burns down the Tombs for good, with Jody’s corpse inside of it, also made for a fitting conclusion for that character, at least for now. 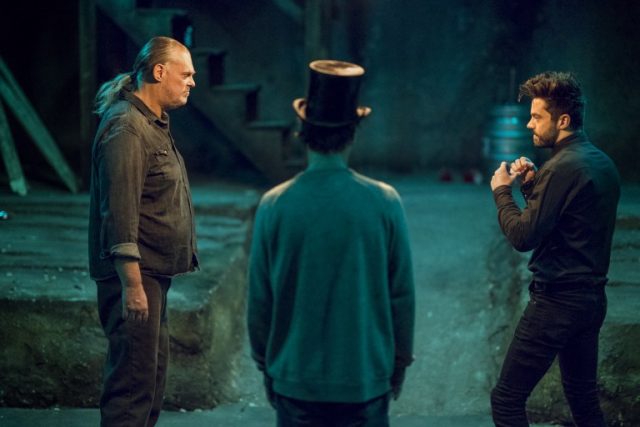 This of course brings Jesse to Gran’ma, with Jesse finally able to fulfill his promise to his adolescent self that he would kill his wicked grandmother one day. Jesse uses Genesis to quickly and easily get both himself and Tulip out of Gran’ma’s magic contracts, but it seems that Gran’ma has one last ace up her sleeve nonetheless! Turns out, Gran’ma’s modified deal with Satan means that if Jesse kills her, he’ll condemn himself to a certain trip to Hell when he dies. This initially has Jesse over a barrel, robbing him of his ultimate desire to finally see justice done against Gran’ma, but seeing him turn around and kill her anyway after he first attempts to leave Angelville, strapping her to her own life-sucking machine to send her straight to Hell, as Satan promised, was wonderfully badass. Jesse may have sealed his own fate, but in the name of finally breaking away from his dark past in Angelville, it’s likely worth it for him to do so.

Tulip, meanwhile, still has the thorny issue of Hitler’s rebuilt SS stopping the bus to Hell, with Sydney and the Saint of Killers ready to confront them. The result of this is another fantastic action scene, one that’s just as amazing as it is completely ridiculous. The Saint and Sydney naturally make short work of Hitler’s goons, with Tulip managing to dispatch at least one herself to boot, though Sydney’s mocking of the gruesome nature through which the Saint’s family died ends up becoming her undoing in the situation. God in turn also bails Tulip out, stopping time to promise Tulip forgiveness and absolution if she convinces Jesse to stop looking for Him. Like Jesse however, Tulip defies the chance to escape damnation, ultimately preferring to stick with her surrogate family then find any sort of divine resolution. This allows Tulip to escape a tank blast, courtesy of the Saint, who then proceeds to rip out Sydney’s eyes, and finishes the job of taking Eugene and Hitler back to Hell. Granted, AMC censored the actual blinding of Sydney by having it happen off-screen, which was a bit lame, but it was nonetheless both awesome and funny to see the Angel of Death herself subsequently stumbling around blind for the remainder of the episode. 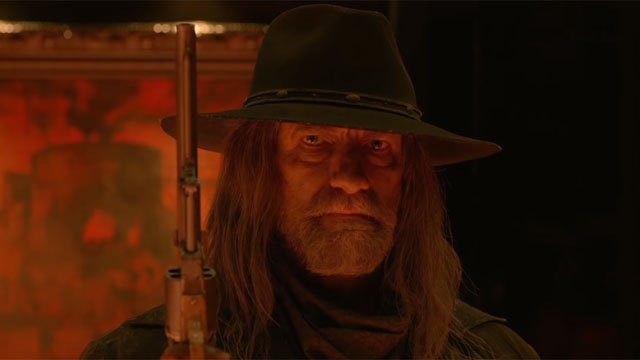 In fact, it’s difficult to argue with the Saint being yet another big MVP in this season finale. Now thoroughly disillusioned with the scattershot divine rules of Heaven and Hell, the Saint brings Eugene and Hitler back to Satan as promised, and receives his weapons in turn. After getting his guns and sword back however, the Saint demands answers from Satan about the nature of how his family died, with Satan eventually confessing that their brutal demise was actually God’s idea. The Saint nonetheless responds by shooting Satan in the head and killing him, before leaving Hell with Eugene. Yes, that’s right, the Saint of Killers just murdered the Devil himself! Only on Preacher does this manically insane story twist fly, just as it feels equally appropriate for Hitler to assume the role of Hell’s ruler as if nothing happened. The Saint truly is the most dangerous character in the Preacher TV universe at this point, and now that he’s targeting both Jesse and God Himself, he’s bound to only get better! Granted, Eugene suddenly seeming to want his own brutal revenge against Jesse, seemingly a tease of his imminent transformation into the vigilante, Arseface next season, feels like a bit of a leap, considering he tried to tell Satan not moments ago that he can find his way back to God’s good graces. Still, hopefully Eugene’s character starts becoming more noteworthy and interesting next season, since it really does feel like his Mary Sue act has effectively gone as far as it can go now.

This leaves Cassidy, who is still facing certain doom in the clutches of Les Enfants du Sang. He does manage to talk his way out of the sunlight trap by finally asking for Eccarius to forgive him though, and thus returns to the cult’s good graces. This effectively plays with some of the cowardice and weakness that Cassidy can display at his worst, and even better is that the show leaned into viewer expectation very nicely here. You see, Cassidy had a plan the whole time, having turned the kindly grandmother of the house after she discovered that Eccarius was murdering his turned followers, with the grandmother in turn turning all of the cult members into vampires, vampires that are all now fully aware of Eccarius’ true nature. Cassidy using his wits to finally stop his former vampire lover was highly satisfying, with Eccarius ultimately being yet another fatality of the episode, as his followers devour him alive, before the sun burns his body to ash. This finally frees Cassidy and allows him to rejoin his friends… Or so it seemed at first.

Yes, there’s just one more sticky wicket in the equation that viewers may have surprisingly forgotten about, given all of the other exciting story elements at play in this season finale; The Grail. The Grail arrive fashionably late in the final moments of the episode, with Hoover casually walking back into the company of Les Enfants du Sang, before handing Cassidy an umbrella, and thus protecting him from a massive solar-powered assault by Herr Starr and Featherstone! This kills almost all of the vampires and effectively destroys Les Enfants du Sang (though leaves the grandmother and her grandson to later conveniently tell Tulip where Cassidy went, since they were hiding in coffins), and leaves Cassidy in the Grail’s custody, seemingly a bargaining chip/trophy for Herr Starr to indefinitely torture before he starts hunting Jesse properly, now fully abandoning his messianic hopes in favour of just being out for blood. The episode even dropped the rare AMC f-bomb in the final seconds to bring this point home, as Starr tells Featherstone that he’s done playing chess, and it’s time he, “Played some fucking checkers.” The icing on the cake here is that Starr very casually dispatches Hoover shortly beforehand, knocking off his goofy parasol hat before just letting him burn to death beside him, with Hoover hysterically killed by the very figurehead he refused to betray. I suppose this thankless demise for Hoover is very fitting, especially when the character deviated pretty heavily from his comic book counterpart in the end anyway. The dynamic between Starr and Featherstone is usually more entertaining as it stands, so I don’t mind the idea of Featherstone just going full-time as Starr’s right-hand agent, frankly. 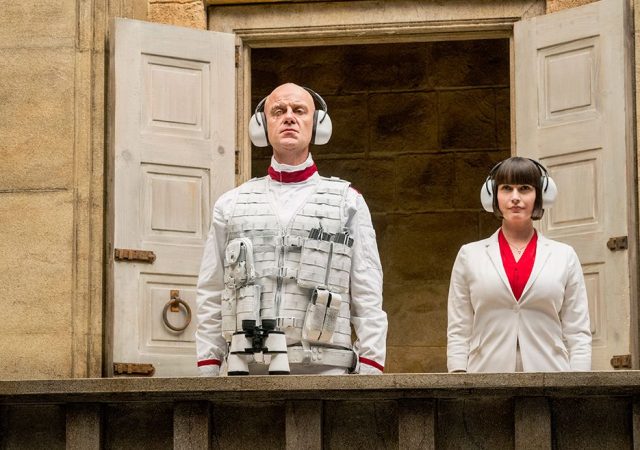 That last ultra-impressive display of the Grail’s military might, now fully in Herr Starr’s control after Jesse’s killing of the Allfather, was the perfect way to cap off an outstanding season of Preacher, no doubt leaving fans pumped and primed for what comes next! “The Light Above” was not only the show’s best season finale to date, but could be another contender for one of Season Three’s best episodes overall, in fact! The final destruction of Angelville’s forces, the collapse of Les Enfants du Sang, and the many scenes that incorporated Hell’s agents getting a good spanking by the Saint of Killers (complete with Satan himself even getting a bullet in the head!), all went down pretty much flawlessly, closing out everything from this season on a superb high note! AMC hasn’t yet renewed Preacher for a fourth season, though this isn’t unusual, since they never seem to renew this show early. Considering this season’s increase in viewership and especially positive reception from critics and fans, I think it’s all but certain that we will get a fourth season announcement for Preacher fairly soon, especially after Season Three ended on that glorious cliffhanger with the Grail. I certainly hope so at least, because after its tighter and more consistently bonkers third season, Preacher really does feel like it’s only going to get better from here. Jesse better enjoy his happy ending while it lasts, because somehow, even with the reclaimed power of Genesis, he’s once again about to face his most difficult obstacle yet!