Better Call Saul moved some key storylines forward in its latest episode this week, mostly providing a solid balance between continued character development and underhanded criminal drama. “Talk” certainly lived up to its name, since it was an episode that was certainly packed with a lot of talking (not that this is particularly unusual for Better Call Saul), but the show’s criminal element is continuing to steal much of the season very nicely, even as we see Jimmy take a pivotal step when it comes to working away the lengthy suspension time he still has left to get through.

Yes, Jimmy finally gets a job this week!… Even if he initially turns it down. Jimmy still doesn’t seem thrilled at the idea of working a menial job while he waits for his suspension to be up, but after being pressed by Kim to speak to a therapist, he ends up going back to take the job he initially turns down, to create the illusion of personal progress. Said job involves Jimmy being a shift manager at a cellphone store, which seems like an alright gig at first, until he ends up with apparently the sleepiest cellphone store in New Mexico. Quickly getting bored and unfulfilled, Jimmy is left to do nothing but bounce a ball against the store window. 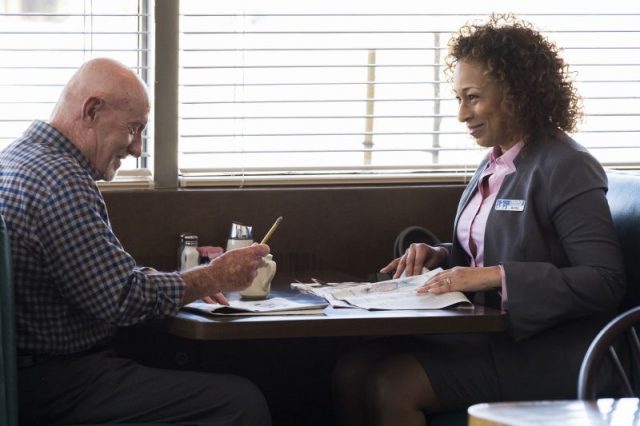 This lack of enthusiasm for his job, and the complete lack of customers, compels Jimmy to walk out on the store and check in with his old criminal henchman, Ira, who apparently made even more money than Jimmy anticipated from the Hummel figurine sale! After getting an even bigger share of profit by skirting the straight and narrow, Jimmy decides to spruce up his store a little bit, by painting an advertisement out front that encourages customers to go into the store for privacy technology. How honest and fruitful this is, we’ll have to see. Nonetheless, an otherwise intentionally dull Jimmy plot did at least have a strong finish in the end, as we see Jimmy once again falling prey to yet more temptation to go to the dark side, especially when it seems to be the only legitimate way for him to truly get ahead. I wonder what Kim would think if she knew about the true depths of Jimmy’s criminal urges…

Actually, speaking of Kim, she was the only slight sticking point in this episode, though not through a fault of her character. If anything, the issue actually comes from the opposite direction! We see that Kim has started sitting in on court cases, while not actually participating in them, seemingly waiting for the right case to compel her to get engaged by her job again. A judge calls Kim into his chambers and insists that he will put Kim to work if she’s going to insist on taking up space in the court, and Kim responds by defiantly sitting in on the very next case for that same judge, once again completely inactive. This was definitely a baller move, but disappointingly, it’s the last we see of Kim for the entire episode. Not only is it a bit annoying that we don’t get any real results from Kim’s defiance at this point, but it also feels like Kim got the shaft in general this week, with her storyline quickly cut short in favour of the other ongoing story arcs. That’s frustrating, since Kim is often one of this show’s strongest characters, at least when it comes to what Jimmy will inevitably have to give up when his transformation into Saul Goodman is eventually complete.

Mike’s storyline meanwhile also starts a bit slowly, but does have a good payoff, especially when it ends up being the capper for the entire episode. Mike got a bit of a twofer this week to boot, since his story arc initially begins with him telling Anita, one of the other grieving spouses from his support group, that one of the group members is lying about his entire marriage, including the loss of his non-existent wife. This is eventually proven, when Mike loses patience and catches the man in a lie, which is just left to hang on an effectively uncertain note, before cutting into a commercial break. The next time we see Mike from there, he’s doing more work scrutinizing the inner workings of Madrigal, before being called to a meeting with Gus in the episode’s final moments. Gus, despite appearing to reprimand Mike for not informing him of Nacho’s undermining when it came to the attempted murder of Hector Salamanca, seems to have another job for Mike, and thus the entrenching of Mike further into Gus’s operation is about to continue. This is sure to be an exciting hook for next week, especially if it continues to lay more precious groundwork for the future Breaking Bad events to come!

I’ve saved the best for last however, and that once again belongs to the show’s proper criminal element, particularly Nacho. Nacho’s storyline has really been kicked into high gear this season, once again encompassing the most violence and thrills, which helps to offset the slower story developments on Jimmy’s end especially. After pinning the faked attack on another cartel, the Espinosa cartel, we get a pretty standout gunfight between the Cousins and the Espinosa goons, with Nacho also reluctantly participating, knowing full well that the Espinosa men are dying under false pretenses. It’s a bit exaggerated for television, but regardless, the Cousins kill all of the Espinosa thugs, with Marco merely taking a bullet in the shoulder. Obviously, if you’re a Breaking Bad fan, you know that the Cousins aren’t going to meet their maker here, which did deflate some of the drama, but the gunfight was still very cool to watch. It was also effective to have the storyline end with a pained, bleeding Nacho sitting in his father’s house, insisting that he can’t go to a hospital. I can’t help but wonder if Nacho’s father is going to be one of the unwitting instruments of Nacho’s inevitable demise, no doubt another innocent casualty of this increasingly tragic universe, and its criminal operations. If both Better Call Saul and Breaking Bad have taught viewers anything, it’s that personal consequences often hit their perpetrators last, and hit everyone close to them in the meantime.

“Talk” follows pretty familiar procedure for Better Call Saul, but it’s tough to complain about that when this show remains one of the most consistently compelling dramas on television. Jimmy is of course wasting no time courting trouble with his latest employment opportunity, but it was Nacho and Mike that really made the biggest impression this week, with Nacho especially really getting his hands dirty more than ever in this episode. The episode really could have used more Kim to truly feel standout, but at least the small Kim subplot that we did get does tease some interesting drama to come, as Jimmy’s orbit does seem to be slowly putting Kim’s own career prospects at risk, however slightly. As usual, we have no choice but to watch the inevitable destruction of these stubborn, defiant characters, who seem all too unable to put their pride aside in favour of the less rewarding common good; But hey, hopefully they have some fun in the meantime…