With the criminal storylines doing so well throughout much of this season so far, it was an interesting decision to have the cartel storylines pretty much completely pushed aside on Better Call Saul this week. Instead, “Quite a Ride” continued the show’s heightened focus on Jimmy, to the point of creating a very Jimmy-heavy episode that made for the future Saul Goodman’s most satisfying storyline of the season so far, while Kim also took center stage in an equally fulfilling subplot. We still got a bit of Mike and Gus to round out the storytelling as well, though for once in Season Four, it feels like the show’s ‘good guys’ are outpacing the criminals when it comes to the narrative, and that made for a very nice switch.

After teasing Jimmy setting up a fake privacy sales ploy at his new job, he begins attracting customers, and his anti-government/IRS pitch seems to move plenty of phones. Jimmy gets so confident and absorbed in his sales pitch in fact, that he even goes out late at night to sell phones off the clock, culminating in a surprisingly successful sales effort to the local biker gang! Alas, Jimmy’s earnings don’t stick though, as he ends up being mugged by teenagers, and losing all of his ill-gotten gains. Karma? Perhaps, but Jimmy naturally doesn’t see it that way. Instead, when Kim discovers Jimmy’s injuries, which he explains away by, “Losing track of time” (she actually bought that?), he simply waves off the incident by claiming he got sloppy, and using it as an impetus to finally follow through on talking to that therapist that Kim suggested to him. 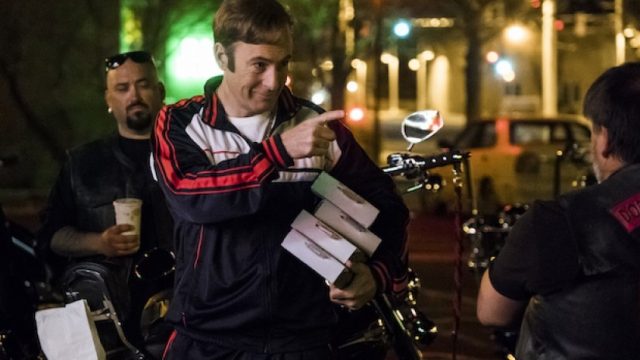 Of course, knowing Jimmy however, he takes two steps forward, and quickly follows that up by taking two steps back. Rather than go see the therapist as planned, Jimmy instead takes down his self-made privacy banner at the cellphone store, and proceeds to not do much else. Rather than leave this core storyline with Jimmy on an unsatisfying note though, the episode instead smartly took the opportunity to have Jimmy check in with his probation officer, and better still, he got a chance to bump into Howard in the mens’ bathroom. Howard has barely been seen all season, particularly past the season premiere, and this actually made for a strong payoff here, when we see him in a disheveled, panicked and troubled state. Howard is clearly being eaten alive by his guilt over Chuck’s death, guilt that Jimmy seemingly refused to assuage at the start of the season, and despite Jimmy half-heartedly offering Howard the therapist number that Kim gave him, Howard instead claims that he’s already seeing one.

Jimmy witnessing the ineffectual efforts of Howard’s, “Good” therapist finally convinces him to flush the phone number, in what’s sure to come back and haunt him with Kim later. The tragedy here though is that Jimmy and Kim were the ones that initially wrecked Howard’s psychological state in the first place, which is now inevitably going to blow back on their own relationship through Jimmy’s choices. This was wonderfully rounded off in the final seconds of the episode as well, when Jimmy tells his probation officer that as soon as his probation is up, he wants to reclaim his law license, and start a new, bigger and more successful law practice with Kim. Obviously, this won’t pan out, given that Jimmy is rogue criminal attorney, Saul Goodman by the time the events of Breaking Bad begin. The episode even shed some more inspired light on that fact in a great cold open, which is actually set towards the end of Breaking Bad, wherein Jimmy, as Saul Goodman, is shredding all of his documents and preparing to flee to his new life as ‘Gene’ in Nebraska, telling his secretary, Francesca to tell her attorney that, “Jimmy sent her.” That last dash of the good man the future Saul Goodman was thus tragically sinks down the drain, cementing a stellar opening and conclusion to Jimmy’s overall story arc this week! 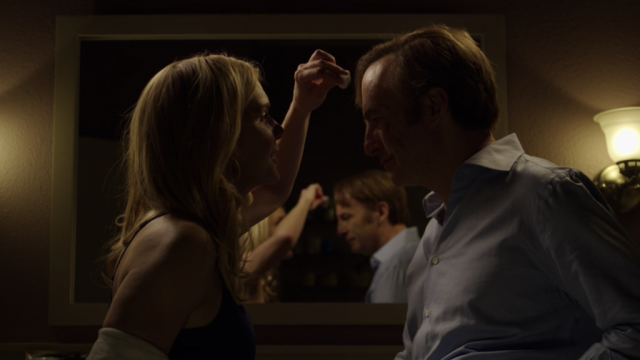 The awesome Breaking Bad teases certainly didn’t end with that strong cold open either! Gus and Mike feature in a very Breaking Bad-heavy subplot, namely when we see Gus prepare to develop his underground meth lab in the laundry, where Walt and Jesse will one day grow their ultra-pure meth for Gus. This mostly served as a neat little bit of fan service and little else, but we still got to see a great showcase of how Gus is about to conduct his aggressive new expansion in the drug business. We see him turn down a capable, but cocky engineer, and later hire one as cautious and over-analytical as Gus himself is (all of this is done through Mike, of course), and that’s about the end of it. This storyline won’t mean much to anyone who hasn’t seen Breaking Bad, but for Breaking Bad fans, this is an exciting taste of future events, since it’s another heavy tie-in between Better Call Saul and the original hit series that inspired it, even if Walt and Jesse remain completely absent from Better Call Saul for now.

As for Kim, we see her once again fall back into old habits herself, as she starts to gain a foothold defending young and stupid first offenders in court. Kim is obviously doing good work, and we see her skills in action to awesome effect in this episode, especially in seeing how well she argues a hopeless case out of jail time, and onto a paltry probation sentence. When one of these clients prevents her from tending to Mesa Verde however, Kim gets a stern reprimand from Paige, and comes to see that she can’t have her cake and eat it too. It seems like the show is keeping a few balls in the air in terms of how Kim’s life will inevitably implode by the end of the season (as if she didn’t take enough punishment at the end of last season!), but the idea of Kim once again being stretched thin between Mesa Verde and her handful of other clients still feels as compelling as it ever was. Viewers will likely share in Kim’s frustration and despair too, since Mesa Verde doesn’t seem to care at all about Kim having to appear in court, and work around her difficult clients. Kim is a good woman, but in this world, no good deed truly goes unpunished. This leaves Kim continuing to be an effective antithesis to Jimmy, a woman intent on staying good, as Jimmy finds himself unable to resist the lure of dishonesty and easy profit. 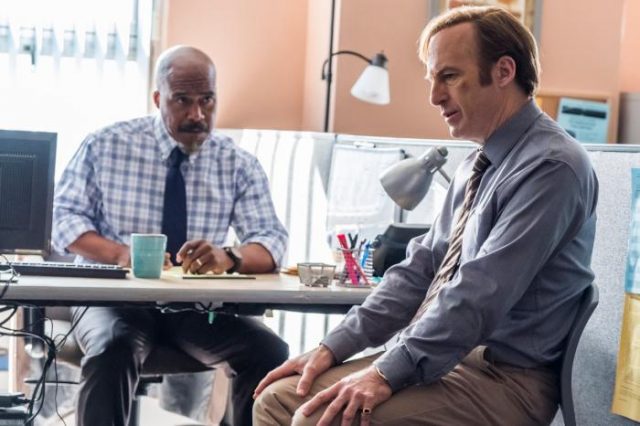 “Quite a Ride” is another especially strong episode for Better Call Saul’s fourth season, especially when it finally didn’t need to lean on the show’s criminal drama so much. This allowed the show to put the spotlight where it should most often be; On Jimmy McGill, the man who will one day become Breaking Bad’s Saul Goodman. The material with Kim also remains standout however, and the inspired Breaking Bad teases that filled out the rest of the episode will no doubt be a huge delight for fans of that show. Again, if you haven’t seen Breaking Bad, then you’ll probably find the Mike/Gus subplot in particular to be sluggish and feel too much like filler, but as I’ve said before, chances are that the majority of Better Call Saul viewers probably binged through Breaking Bad a long time ago. Regardless, it was awesome to see the best Jimmy storyline since the season premiere in this episode, even with Nacho and the cartels completely absent this week. The fact that Jimmy’s and Kim’s narratives are doing so well lately should only make it more satisfyingly painful when they both eventually self-destruct, and likely never speak again, no doubt ruining both of their promising careers in the process.