There seems to be something of a mini-setup trilogy in place for The Walking Dead’s post-Rick time jump, with last week serving as the introduction to our new circumstances, six years after Rick’s mysterious disappearance. This week however means that we’re saddled with the middle chapter, and as you can imagine, “Stradivarius” mostly ended up being a filler episode for The Walking Dead, one that did a solid enough job laying the foundation for next week’s midseason finale, but one that also couldn’t really mine that many effective conflicts through which to keep viewers engaged, beyond the mere anticipation for next week.

The bulk of this episode involved a lot of sitting around and talking, with only a handful of minor walker scrapes dotted around every so often to prevent viewers from completely tuning out. This includes the trek to Hilltop, which seems to be pretty uneventful for the most part, mostly consisting of Michonne and Siddiq discussing Michonne’s decision about offloading the new group of survivors to Hilltop, rather than just keeping them in Alexandria. It really is a good question, and Michonne’s stance just ended up making even less sense when we see it play out here. Sure, I imagine that Michonne has been emotionally hardened quite a lot after coping with the loss of Rick, but Siddiq is right when he says that Michonne is being arbitrary. This new group has proven themselves capable, likable and honest. Why exactly are they not allowed to make themselves useful in Alexandria, yet they’re somehow good enough for Hilltop, a community that Alexandria has allegedly grown isolated from? 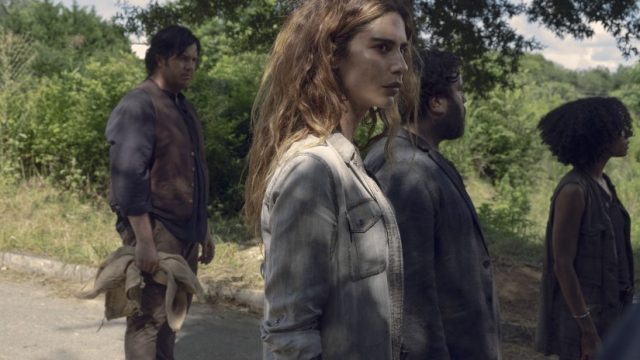 Even the apparent disconnect between Alexandria and Hilltop is fairly debatable too. We see that Jesus and Aaron have maintained a close friendship behind closed doors, and that Hilltop messengers had no problem riding to Alexandria to tell them that they rescued Rosita (more on that in a second). There’s apparently some sort of bad blood between Michonne and Maggie, but we never find out what that entails, nor why Michonne is still afraid to go to Hilltop, even after Siddiq finally tells Michonne that Maggie is gone. Why did Siddiq see fit to keep that fact about Maggie a secret anyway? A lot of this core story arc with Michonne, Siddiq and the new group really doesn’t add up, especially when everyone just rides into Hilltop at the end of the episode, and then everyone just goes to look for Eugene in the final seconds, as if there was no tension at all between their communities. Maybe some of these explanations will come into focus next week, but for now, there’s clearly some key details from the six-year time jump that the show is glossing over, when it really shouldn’t be.

On the note of Rosita, she’s recovered by Aaron and Jesus after stumbling away from the Whisperers, who continue to hunt her and Eugene for unknown reasons. Eugene was apparently stashed in a barn off-screen, and we don’t see him at all in this episode, which is a bit odd, but regardless, this turn leads to Rosita at least getting to safety. The quest to rescue Eugene will obviously factor heavily into next week’s midseason finale, which will probably also serve as the method through which the communities end up in the crosshairs of the Whisperers during Season Nine’s back half in 2019. For now, Rosita’s intel on a ‘smart herd’ is also not truly relayed, oddly, with the rest of the Hilltop scenes instead devoted to Jesus whining about having to manage Hilltop’s affairs, which obviously isn’t very exciting. We do finally get irrefutable proof that Maggie isn’t dead during these scenes at least, and as many viewers speculated, Maggie did decide to do missionary work with Georgie off-screen, conveniently allowing Lauren Cohan to step away from the show for however long she needs to (possibly for however long her Whiskey Cavalier gig lasts), without Maggie having to be killed off. Still, does Jesus have nothing better to do as Hilltop’s new leader than settle noise complaints and horse around with Aaron? 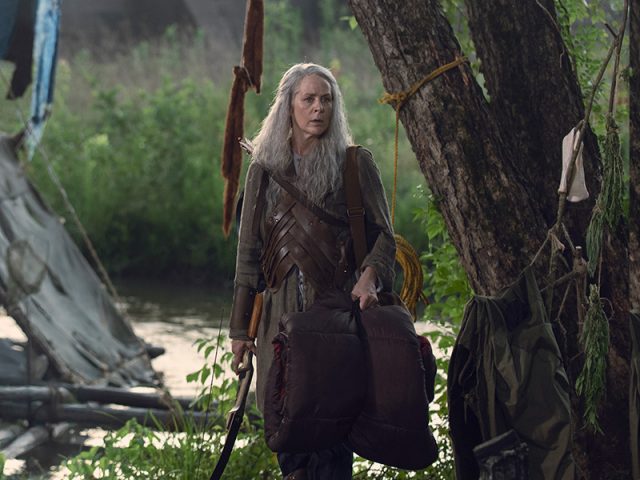 On the more positive side, the re-introduction to Daryl served a stronger subplot this week, especially since it allows Carol and Daryl to have their first major storyline together in quite some time. The two have been separated for what seems like years (and not just due to the time jump!), after Daryl fell in with Alexandria, while Carol instead ended up with Ezekiel in The Kingdom. Fortunately, the two being supposed best friends got to come back into focus this week, as Carol asks Daryl if he will look after Henry, once Henry begins his apprenticeship as a would-be blacksmith. Daryl seems resistant to the idea though, especially when he openly admits to preferring being out in the wilderness. Daryl’s reasons for separating from the communities and operating alone (if you don’t count his faithful dog, aptly named, “Dog”), also nicely tied into how the fallout from Rick’s disappearance affected the communities. It turns out that Daryl is the one who took it upon himself to look for Rick’s remains, and he’s still doing so to this day. This was a nice way to provide a new story direction for Daryl, while also acknowledging that Michonne wasn’t the only Alexandrian to suffer serious emotional fallout from the loss of Rick.

Even better is that this also created an opportunity for Henry to prove his mettle as more than a liability. After Dog ends up being stuck while checking walker traps, Daryl quickly goes to save him, only to nearly get chomped by one particular walker that snaps off at the ankle! Fortunately, Henry, after sneaking out to follow Daryl, saves Daryl’s life, which Daryl eventually begrudgingly thanks him for. Better still though is the quick reveal that Carol was also watching this scene from the shadows, ready to fire an arrow at the walker going for Daryl, if Henry proved to be too slow. This was a nice little turn that helped set up Henry as a loyal new citizen of Hilltop, while also providing worthy assurance to Carol, and by extension, Ezekiel, that Henry is more than capable of taking care of himself, and others. This didn’t completely come at the expense of Henry’s impulsive character as well, since he has to be talked down from the mission effort to go rescue Eugene, once everyone starts to arrive in Hilltop together. As much as Henry seems to have improved a lot, it’s probably a good call to keep him at Hilltop. The Whisperers are definitely well above his league, and I imagine that everyone will find that out the hard way soon!

It probably won’t come as a surprise to anyone that, “Stradivarius” doesn’t end up being the most exciting episode of The Walking Dead, since it has to both set up next week’s midseason finale without wasting all of the cool surprises in store for that, while also doing what it can to pick up with the heap of developments that have no doubt occurred between the communities after the six-year time jump. This meant a lot of talking, and talking, and talking. Sometimes, these conversations are worthwhile, such as during the strong Daryl/Carol/Henry subplot. Other conversations however, like those throughout the weird material with Michonne, failed to really do anything worthwhile that didn’t simply feel like time-wasting, with these moments instead having characters unrealistically withhold information and be uncooperative (i.e. Siddiq), simply to create needless drama. Fortunately, now that this middle chapter of time jump setup is out of the way, we can look forward to what’s hopefully an intense and memorable first conflict against the Whisperers next week, and as with any midseason finale for The Walking Dead, it’s especially likely that some important member of this mission isn’t going to make it back alive!

The Walking Dead 9.7: "Stradivarius" Review
The Walking Dead slowed down for an obvious filler episode this week, setting a decent stage for next week's midseason finale, at the expense of some especially slow pacing.
THE GOOD STUFF
THE NOT-SO-GOOD STUFF
2018-11-19
73%Overall Score
Reader Rating: (0 Votes)
0%