Gotham divided itself between two major storylines this week, with Gordon and Bruce predictably spearheading one core plot each, while a subplot with Penguin eventually represents dire consequences for Haven. “Penguin, Our Hero” unfortunately spiraled back into the same old song and dance between Penguin and Gordon, who are yet again forced to form an uneasy alliance when their shared interests inevitably align, but those looking for some forward movement on Jeremiah may at least be satisfied with Bruce’s and Selina’s mission this week, even if Jeremiah himself still remains unaccounted for, despite their efforts.

With Haven now established, survivors in Gotham City finally have a place to go and get away from all of the gang fighting in the ruined city. Penguin, however, takes notice when several of his ammo factory employees also defect to go shack up with Gordon, and that also happens to coincide with some of the leftover Street Demons bursting into Penguin’s office to try and gun him down, believing he killed their friends after Nygma’s ‘discovery’ last week. It doesn’t take a genius to determine that Penguin obviously wasn’t behind those attacks on the Street Demons’ members (the surviving Street Demons falling for this obvious trick is so dumb in fact that even the show itself mocks how little sense it makes here), but at least this provides a convenient opportunity to get Penguin some more goons, and come knocking on Gordon’s door again. 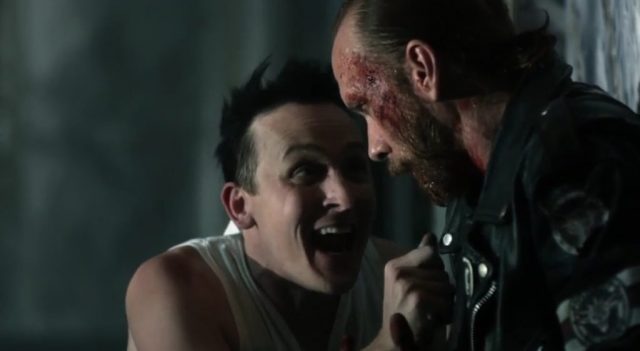 The idea of enemy factions inevitably making their way to Haven is a good one, and one that makes a lot of sense in the narrative. Bullock having to hastily seek the aid of Barbara when Penguin finally attacks also carries plenty of dramatic potential. It’s just too bad that it keeps coming down to the same old tired conflicts, and the same old tired results. Regardless, Penguin inevitably discovers that Gordon is bluffing about his cops having ammo, despite obviously spending their stolen munitions during last week’s episode, and this leads to Penguin seizing control of Haven, and forcing his former employees to vacate the premises. At first, this is actually not bad, especially when long-suffering criminal accountant, Mr. Penn ends up finally being killed during a scuffle, and confessing with his final words that everyone under Penguin’s employ actually despises him.

Penguin has had something of a weird arc so far this season, since he seems to be descending into some sort of weird, narratively convenient madness, madness which has him acting like a shrieking man-child one minute, and then a shrewd, deadly gangster the next. That’s always been his character on this show to an extent, but it feels especially blatant and clumsy by this point, especially when we know that Penguin obviously won’t end up becoming a hero by the time Batman is prowling Gotham City’s streets. Frustratingly, when Penguin is thrown in a jail cell next to Gordon, for mouthing off to the Street Demons, naturally, the two have to yet again come together and form an alliance to keep the rest of the city’s gangs at bay. Honestly, why the hell did it take Penguin this long to come around to that idea? Surely, he should have realized that Gordon was his best and most stable bet for continued survival pretty much immediately after the bridges fell! 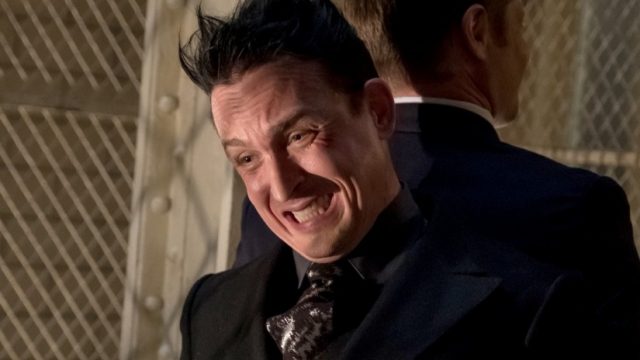 As for the Bruce/Selina subplot, it felt like the more interesting storyline for most of this episode, especially when the subplot involves the two having to venture into the Dark Zone, giving us our first real look at one of the scariest sectors in an already terrifying ruined city. Apparently, the most unstable and violent psychopaths live in this part of Gotham City now, and before long, Bruce and Selina happen to run afoul of the Mutants, a recognizable DC Comics gang, specifically from acclaimed Batman graphic novel, The Dark Knight Returns. Gotham has featured the Mutants before, but they’re now completely modeled after their Dark Knight Returns incarnations in this episode, and I have to admit, it was pretty cool to see! It was also cool to see Bruce start noticing that something is off with Selina, particularly when she violently attacks the biggest Mutant thug, even after he coughs up intel about Jeremiah’s location, leaving his face heavily carved up. Yikes! Catwoman’s finally starting to truly come out, it seems!

Simple foreshadowing is what the whole storyline with Bruce and Selina ultimately came down to this week however. The two do end up finding a ‘church’ of Jeremiah’s at least, after enough wandering in the Dark Zone, which is being overseen by Jeremiah’s assistant, Ecco, now completely decked out to more or less be the Gotham universe’s version of Harley Quinn. It’s little more than an Easter egg for Batman/DC fans, but there are some nicely twisted moments with Selina trying to infiltrate Ecco’s rituals, eventually coming down to a fight where she nearly kills Ecco, before Bruce makes her hesitate, resulting in Ecco escaping. The show didn’t end up delivering on the goods with Jeremiah this week, who remains at large for now, and that was a bit of a let-down, ultimately leaving Bruce’s and Selina’s subplot not moving forward as much as it probably should have here. At least the subplot is entertaining while it lasts however, especially with Selina continuing her increasingly rapid transformation into Catwoman during these final Gotham episodes. 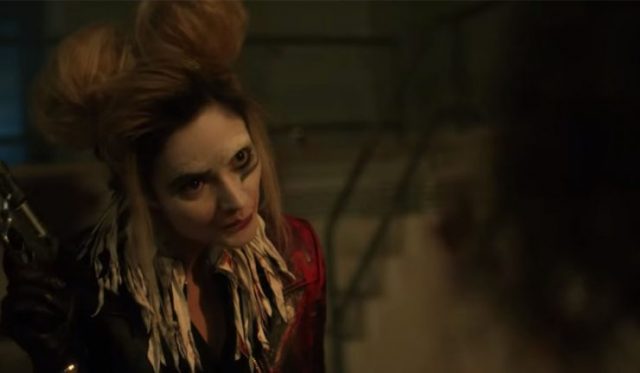 It felt like the real highlight of this week’s episode actually occurred in its final minutes, whereupon Barbara finally almost corners and kills Penguin yet again (another tired conflict that the show is recycling for the umpteenth time!), leading to Gordon and Penguin just barely avoiding being blown up with the rest of Haven! Haven being very quickly and suddenly destroyed does stink a bit of being rushed, considering the fact that Gotham only has a handful of episodes left before it’s wrapped up for good, but it was a very surprising turn that creates a strong mystery for next week, while yet again leaving Gordon desperate and vulnerable. Even if, “Penguin, Our Hero” didn’t end up feeling all that satisfying with some of its final results, at least the shocking destruction of Haven, and the violent murder of every single refugee under Gordon’s care, proved to be an exception. What might be especially interesting is if Bruce’s and Selina’s actions in the Dark Zone may have provoked Jeremiah into destroying Haven. This is more likely going to be our introduction to Bane though, especially since he strangely has yet to appear on Gotham, despite being billed as a major antagonist for this final season. I’m not sure who else besides Bane could so quickly and brutally kill all of Gordon’s refugees with such a decisive and lethal move, but regardless of who is behind the violence, Gordon’s reformed alliance with Penguin couldn’t have come at a better time, even if it is a very tired turn by this point.