Less than a full calendar year has passed since gamers first met and dealt with Joseph Seed, his family members and their Eden’s Gate cult. Now, Ubisoft Montreal has returned with a new entry in the venerable Far Cry series, which acts as a slightly altered follow-up to Far Cry 5. It goes by the name of Far Cry: New Dawn, and is out now for Xbox One, PlayStation 4 and PC.

Now, the questions that many are asking pertain to whether or not Far Cry: New Dawn is a good game, as well as whether it’s worth purchasing less than a year after the last one was released. The answer to both questions is yes, so long as you’re a fan of the series, or this type of game in general. There’s lots of bang for your buck here, especially given that New Dawn retails for slightly less than its predecessor did upon release.

Those who played Far Cry 5 will know about its much talked-about ending. Even if you haven’t, it’s still possible that you’ve heard something about what happened at the end of that game. Far Cry: New Dawn picks up there, before going fifteen or seventeen years into the future. There, it shows the survivors of Hope County, Montana, venturing to the surface from their underground bunker for the first time since the bomb went off. Unsure of what they’ll be greeted with, they take a risk, open the hatch and venture topside. 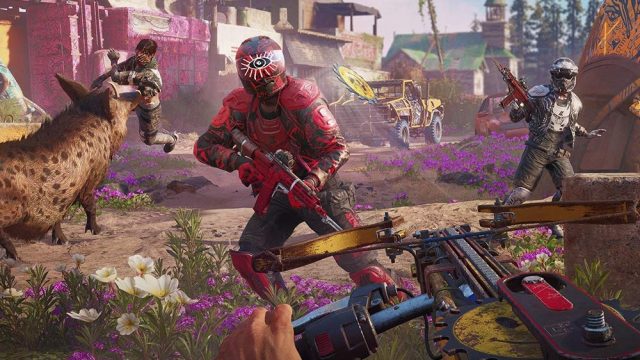 What those folks are greeted with is a changed world, and one that has mostly regenerated, regrown and beautified itself through natural facilities. Not all of Hope County has come back to life, though, as parts of the region are still completely burned out, irradiated and dangerous. Those parts are obviously to be avoided, and act as a kind of barrier to the game’s available landscape.

What’s most evident is that natural life has found a way to return in a big way. Animals have survived and multiplied in great numbers, as have fish. Grass also covers most of the landscape that isn’t taken up by either crystal clear or muddy ponds, streams and lakes. The most noticeable thing of all, though, is the colour. Not only has Hope County regrown its natural beauty, but it’s been accentuated by an incredible amount of colourful flowers in hues like pink and purple. These dominated the landscape, and make this an even nicer looking game than Far Cry 5 was.

It all combines to make Hope County, and its somewhat familiar map, feel different and varied.

Things aren’t all roses, though. In fact, something evil lurks on the surface, and it exists in the form of the Highwaymen. The area’s local chapter, that is, which is headed by two rather evil twin sisters named Mickey and Lou. They’re the big bads you’ll be dealing with here, and they don’t pull many punches. 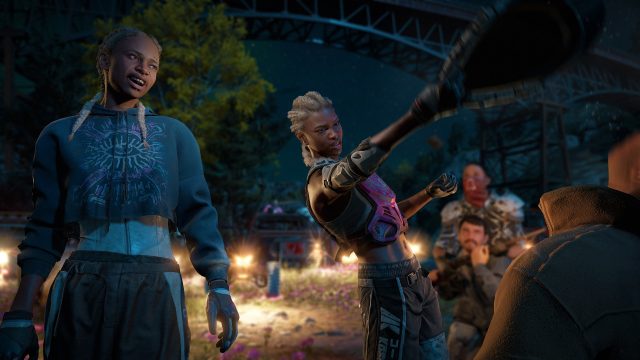 The general idea here is that, after coming up from below, those who survived the Eden’s Gate apocalypse have found that their good intentions are being taken advantage of by ne’er do wells. Those greedy, ignorant and downright violent Highwaymen have come to the rebuilt civilization that is Prosperity, kidnapped some of its founding members (including Nick Rye) and forced his now grown daughter, Carmina, and wife to search for help.

Well, they’ve found it, in the form of Cap or Captain. That’s the player’s male or female avatar, who can be customized to suit one’s intended visualization. Cap is recruited from a group that is traveling through the area by train, but Carmina’s attempts to secure their help don’t go unnoticed and the shit hits the fan almost immediately.

Once again, this is a very nonverbal character, which I’m not as big on as I used to be. The silent protagonists found in Far Cry 5, and now Far Cry: New Dawn, make me miss Jason Brody and even Ajay Ghale. The design works here, for the most part, but it strips the lead of personality and prevents them from being as memorable as they could’ve been. This series was better when its stories were written around characters that had personality and depth, and felt somewhat real.

For the most part, Far Cry: New Dawn is more of the same Far Cry goodness that fans like myself have loved for a number of years now. It offers a large, open world that is full of not only main missions, but also secondary objectives, collectibles, hunting challenges, super dangerous animals and locations to loot. This includes some of the bunkers that we visited during the last game’s campaign. Things look different, though, and former huts, homes and the like haven’t held up so well over the last seventeen years. In fact, many have been mostly destroyed, grown over or almost knocked to the ground.

New Dawn has fun gunplay, and plays very much like its predecessor. You’ll have multiple weapons to choose from, can help and ally with colourful guns for hire (like a dog, a massive hog, a shotgun toting reverend and Hurk), and can play the game at your own speed. There will also be many encounters with wildlife and Highwaymen patrols, not to mention their supply drops which can be stolen. That said, one of the main focuses here is improving your home base so that it can be more self-sufficient and weather attacks from the aforementioned assholes. This is done through scavenging supplies (duct tape, metal, etc.) and collecting ethanol. 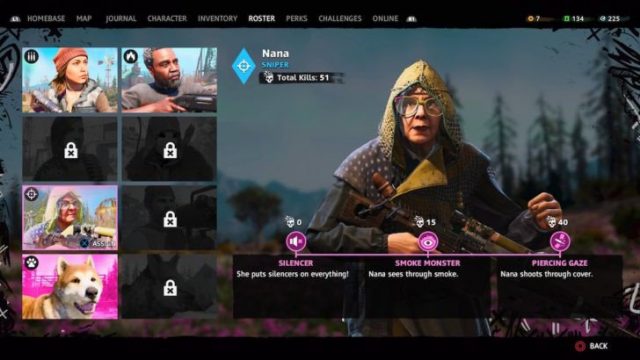 Ethanol is the new world’s main currency, and it’s not in great abundance. To obtain it, you’ll have to take over enemy controlled hideouts, and can earn additional units for doing so without being noticed or causing alarm. Said hideouts have three levels, too, which allows you to basically reset them for more ethanol. By this, I mean that if you take over a level one hideout you’ll earn at least 100 units of ethanol. Hitting the proverbial reset button will then turn it into a level two hideout, with more challenging enemies and a greater amount of them, but will grant you an additional 50 units in the process.

Fuel trucks can also be hijacked, but they’re not always easy to catch. Furthermore, aerial Highwaymen supply drops also contain some ethanol, and can be stolen pretty easily. It’ll require killing a few bad guys, but nothing major.

It can take a little while to earn enough ethanol to upgrade your facilities, which include a medical herb garden, an orienteering office, a garage, an expeditions (contained challenge maps) wing, a training facility that boosts the skills of your guns for hire, and a workbench. The latter is perhaps the most important of them all, because it’s the workbench that you’ll use to create increasingly powerful weapons that come in level one, level two and level three varieties. Some of these weapons are pretty neat custom affairs, but others are traditional guns like pistols, SMGs, assault rifles, shotguns and rocket launchers, which get better as you go up a level. All of the above are crafted using scavenged materials, too.

There are a couple of times where the campaign essentially pauses and makes you make numerous upgrades, which means spending an hour or two taking over hideouts, unless you’ve been proactive and already have more than enough ethanol saved up. At these points you’re also tasked with saving and aligning with the game’s five different specialists, such as Nick Rye and Skarky Boshaw. Each one has his or her own mission, and a couple of them are rather good. Nick’s especially.

Needless to say, this is a more survival focused Far Cry, albeit one that doesn’t get into the minutia of many other survival-based affairs. Thus, it still feels very much like the other games, and isn’t boring or convoluted. It could’ve had a deeper storyline featuring better and more memorable villains, but the Highwaymen and their two bitchy leaders do a decent job of serving the purpose. You’ll also run into some familiar faces, whom I will avoid mentioning due to spoilers and whatnot.

For the most part, Far Cry: New Dawn offers very good presentation. It looks really nice, has some impressively detailed character models, and oozes colour. On top of that, there’s lots of boisterous sound effects, some quality licensed music (which can be unlocked by searching out each of the game’s hidden MP3 players) and quality voice acting. Things aren’t all rosy, though, because the game has the odd glitch, including one that caused me to fall through the map. It doesn’t always perform perfectly, but it’s mostly solid.

With all that having been said, I find it very easy to recommend Far Cry: New Dawn. If you’re a fan of the series you’ll definitely want to pick it up, and the same goes for anyone who likes this type of quirky, open world first-person shooter. That said, if you’ve never been a big fan of the Far Cry series, New Dawn won’t change your mind. It’s not the best of the bunch and isn’t much different from its predecessor, but it’s a very solid affair that offers more content than this reviewer ever expected, including a campaign that is approximately 20 hours long.