Godlike monsters, obsessive cult worship, strange beings, racial tension, murder and spooky content. If all of those words brought one man’s name to your mind, then it’s very possible that your love (or even disdain) for H.P. Lovecraft has brought you to this review. If not, let this be your introduction to the fact that The Sinking City is inspired by and relies upon the narrative works of weird American fiction writer, Howard Phillips Lovecraft.

Developed by Frogwares — the chaps behind the Sherlock Holmes detective games dating back to 2002 — The Sinking City is an open world experience that attempts to mix interesting sleuthing with odd creatures, a creepy port town and supernatural elements. It’s a game that had lots of potential, and really piqued my interest with some impressive trailers, cool visuals and interesting walkthrough videos. Unfortunately the end result is a flawed and boring affair that lacks the fun we play video games for.

It’s sad, really, because there was so much potential here.

From the onset, we play as one Charles Reed, a former diver and current private investigator. He awakens aboard a ship destined for Oakmont, where he plans to investigate the cause of strange dreams he’s had since the War. Things actually kick off with one of these dreams, with Charles finding himself on a potentially doomed vessel that is being overlooked by a massive, godlike creature. Shortly afterwards, he comes alert, realizes that it was all just another dream, and docks at Oakmont where he’s met by the man who’s supposed to help him out and show him around. 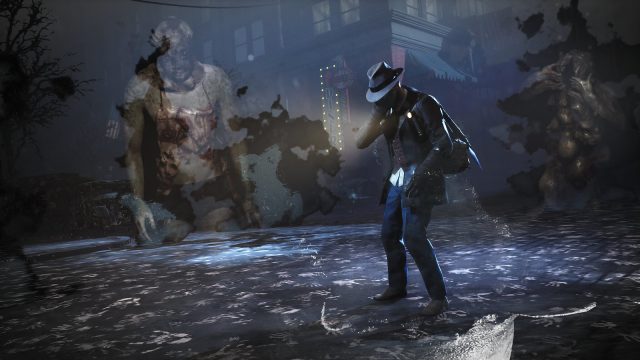 Oakmont, you see, has fallen victim to a flood, and has also welcomed a race of fish-like creatures that migrated during a time of need. Their being there has created tension, especially with another strange, animal-like race that looks like a mix between a human, a dog and an ape. You’ll encounter both quite early on in the game, and will get to experience the tension firsthand during its opening mission.

As a result of the flood, the rather large town is partially underwater, meaning that the only way to access some areas is by rickety boats with weak motors. You can find them stationed at ‘docks’ whenever the road runs out and the water begins, and can take them from one dock to another. This is the game’s main form of travel that isn’t on foot or basic fast travel, which is limited and frustrating in the way it’s implemented here. This is because fast travel is limited to phone booths, and they’re somewhat few and far between in what is a big open world town. One that is honestly too big for what it has to offer, and the gameplay found within it.

The game world is dark and incredibly damp, and has been ruined by the water that once overflowed through its streets, alleys and buildings. Its people are just as rigid, rickety and callous, and don’t take very kindly to newcomers. They’ll help you, but you’ll need to talk them into it, show them something or offer to scratch their backs in return. Sometimes this will require doing missions for them. 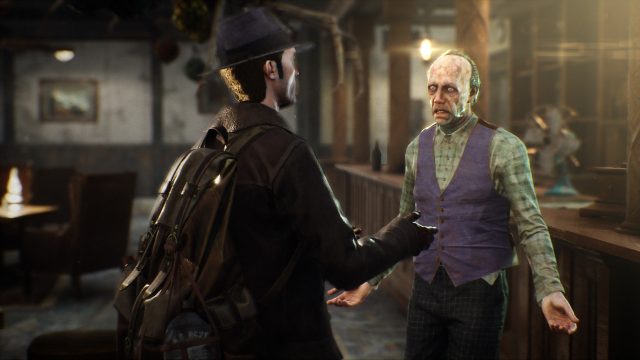 The Sinking City‘s typical gameplay loop involves learning the location of a crime, or a place you need to investigate, finding your way there by street names and an old map, and then scouring the area for clues, items, documents and the like. It isn’t always clear where you’re supposed to go, what your next main objective is or exactly what you’re looking for, because the game’s dialogue, objectives and mission structure can be quite unclear at the best of times. As a result, a lot is left up to the player to decipher through notes and conversations. This wouldn’t be so bad if it was fun, or if the town wasn’t as big and as annoying to traverse as it is, nor would it be as bad if the game wasn’t so overly unclear in general. However, you’ll likely spend a good amount of time lost, just as I did, especially if you happen to wander into the wrong building.

One of the earlier missions tasks you with going to the headquarters for an aquatic excursion that went wrong. The place is said to be at the corner of X and Y streets, so it should be easy enough to find given that you have the map. I wasted a good amount of time, though, because I entered a different building at that intersection and spent a while trying to find what I was looking for. This wasn’t exactly fun, but was my fault as well as the game’s.

It is possible to request more hints through the game’s menu system, but even then it’s not as player friendly as one would hope. Those who like the no or limited hand holding approach may appreciate this, but others will likely find it frustrating and tedious.

Completing mission objectives doesn’t just require you to scour an environment for traditional clues like letters, keys and the like. No, The Sinking City enlists the use of the supernatural for its mechanics, clues and investigations, as it should given its genre and well known source material. While Charles Reed is a private investigator, he’s not exactly the normal kind. He’s human, yes, but also has the ability to look behind the curtain to the realm where ghosts exist. By pressing a button, one can tint the screen blue, which allows you to see things you otherwise wouldn’t have been able to. Weird symbols will glow a whitish blue, investigated items will reveal visions of strange beings and events, and you’ll also be able to see hints as to where people may have gone. Hell, you’ll also see ghost-like apparitions that will point and guide your way. By using this second sight tool to your advantage, you’ll be able to solve the murders and other investigations you undertake. It will, however, often require a lot of sleuthing, as well as arranging events in the proper order. There is little in the way of repercussions for failure, so trial and error works fine here.

It’s important to mention that using this second sight ability will mess with your mind. If you use it for too long, the meter will drop to zero and Charles will slowly lose his grip on sanity. Visions will appear, creatures that aren’t really there will show themselves, and the character will become tormented. The same is true of frightful situations, which can threaten the lead’s mind. Getting away from scary encounters can help, but so can taking anti-psychotics. Those are just one of the items that you can craft in the game’s odd and confusing crafting menu, where springs and alcohol somehow create medkits.

Of course, as with the developer’s Sherlock Holmes games and titles like it, The Sinking City will force you to interact with people (and other beings) in order to discover more about the events that transpired. One would hope that this would allow for some really rich and detailed dialogue trees, but that unfortunately is not the case here. The denizens you’ll speak to are very rigid and structured, and don’t offer much outside of standard NPC fare. Mr. Reed’s dialogue options are also very limited, in a way that makes it so that it doesn’t matter what order you ask questions in. You can’t really use your speaking chops to get a different effect, which is disappointing to say the least.

Said retrocognition and basic dialogue systems are also joined by the ‘Mind Palace,’ which is a fancily named menu where Charles can organize and link his thoughts in an attempt to draw a conclusion. Here, you’ll take two different revelations or pieces of information and combine them to create evidence. It sounds simple, and it is in theory, but it’s really not as user friendly as it sounds. The information can be confusingly written, and it is often unclear as to how things fit together. This will lead some to trial and error, through simply selecting two things at random and hoping they will stick.

That’s what I did. 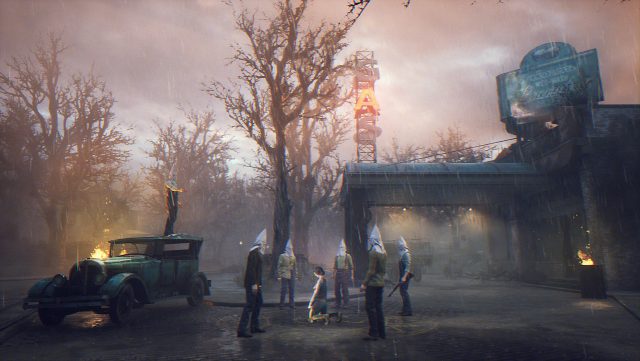 When you’ve finished an investigation, and have combined all of the necessary and important pieces of information into clues, you’ll then be able to make a moral decision as to how to proceed. This can boil down to things like letting a murderer walk or turning him in to justice, and most of it is pretty binary. It feels as if this mechanic has been diluted from previous Frogwares games, because the options are so limiting and lack creativity. Honestly, it’s like the game wanted to be some sort of supernatural, Lovecraftian L.A. Noire, but wasn’t given the time it needed to become one.

This disappointment carries over into The Sinking City‘s combat, which is lackluster at the best of times. Reed can swing a baton or knife, or shoot different types of guns at the supernatural creatures that attack him, but none of it is fun or well designed. To call it clunky would perhaps be understating its issues and how dated it truly feels. For this reason, it’s sometimes better to just run from combat encounters whenever possible.

The drawbacks mentioned above aren’t aided by an abundance of backtracking, stilted and dated movement mechanics that make it difficult to avoid attacks, and a lot of tedium. That, as well as mediocre writing that comes out of the mouths of characters who are mostly one note and forgettable. 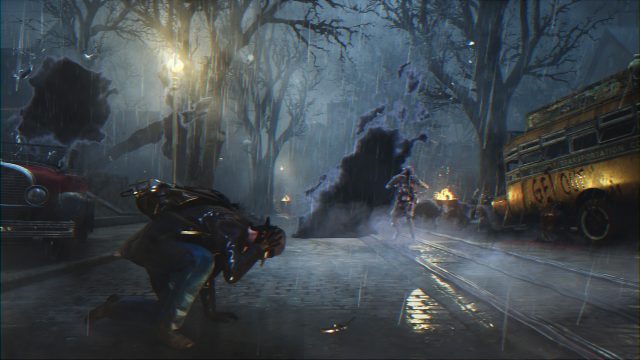 Truth be told, I was quite excited for The Sinking City; so much so that I preordered and paid the game off months before it released, in case I wasn’t able to get a review code. The trailers really piqued my interest, the game looked to have a great atmosphere, and I was hopeful that it’d end up being one of those unexpected gems that can be recommended to people who are looking for something unknown to play. Unfortunately that didn’t end up being the case, because the end result (at least as of this writing) is a dull, tedious and clunky game that I struggled to enjoy from the get go. As much as I wanted to have fun or be entertained by this game, and as much as I hoped it would impress me, it did not. It ended up boring me to the point of feeling like a chore to play.

On the presentation front, Frogwares’ latest is pretty rough, which makes me wonder how much it would’ve benefited from a lengthier delay. The visuals are dated, the character models aren’t great looking, and the animations aren’t very smooth. Worst of all, the game loads a lot and has lengthy loading times to boot, while also dealing with severe screen tearing. The audio is better, but it’s nothing to write home about either.

I’m disappointed that I have to write this, but The Sinking City is not a very good game. It’s not very scary, nor is it much fun, and its technical problems definitely hurt its appeal. There are facets to build upon towards a better game, but as it stands right now I can’t recommend this one in good faith. I wish I could, but I can’t.