iZombie is officially out of cases-of-the-week. Now, all that’s left is the climactic battle for New Seattle, which is beginning to come to a violent head in, “Bye, Zombies”, as the final war between humans and zombies finally erupts in earnest. This leaves the show’s protagonists undertaking a desperate gamble to try and create a zombie cure once and for all, which of course hits a last-minute snag at the CDC. This is before considering the threat of Blaine still being at large to boot, who makes his own decisive strike against Liv’s operation, once he discovers where the Freylich kids have gone.

The good news regarding, “Bye, Zombies” is that it’s a pretty entertaining episode, even if it permanently ditches iZombie’s usual case-of-the-week format, as we can expect, considering that the show is now moving towards an overall conclusion. The bad news however is that the series’ climactic narrative is still pretty shaky here, with the war between humans and zombies still feeling pretty forced, particularly as iZombie’s big villains become less credible with every episode. To that end, it feels like the show has almost completely thrown up its hands in terms of storytelling integrity, focusing more on being fun than being smart. This does however mean that it’s tough to invest all that much in the final fate of humans, zombies or New Seattle alike, since all of it is starting to feel far too contrived to be believable. 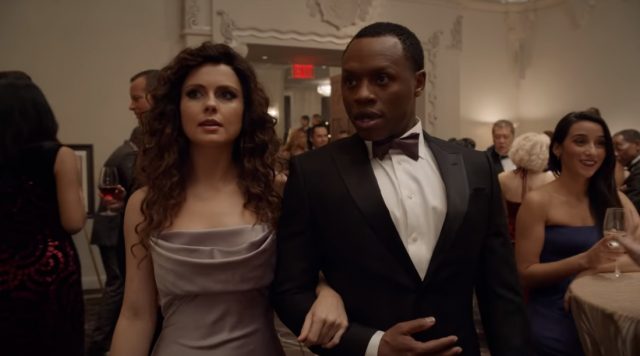 To the writers’ credit though, it appears that they eventually anticipated the very same plot hole that I pointed out in my review of the previous episode; If Ravi is developing a zombie cure, one that is rapidly nearing completion, then who even cares about the plans of Martin, or any other zombie extremist out there? In trying to resolve that, the show clumsily forces a ‘twist’ wherein Saxon has somehow stolen all of the cure formula, in an effort to try and turn it into a gradual treatment, so that a big pharmaceutical company can make more money off of it. While this does make sense through the lens of the U.S.’s disappointingly widespread ‘Big Pharma’ business model, it doesn’t make sense in terms of how Saxon even learned about the cure research in the first place, which was being shared between Ravi and Charli without his knowledge (especially since he very bluntly severed ties with Ravi), nor how the CDC somehow got in bed with a crooked pharmaceutical company. Again, to be fair, the episode does point out that what Saxon is doing is illegal, but this is still the freakin’ CDC! How does Saxon think he won’t be caught?!

Even if it’s a heavily contrived last-minute obstacle however, Saxon stealing the cure formula does at least lead to a fairly amusing story device for most of iZombie’s leads. Left with no other options, Liv proposes a high-stakes heist to get into the CDC vault with Ravi, with both Liv and Ravi consuming the brains of accomplished criminals in order to steal back the formula. It’s actually a really brilliant and fun setup for iZombie’s penultimate episode, and Babineaux coming along as, “The Clooney” feels similarly fitting, serving as the ‘straight man’ to Liv’s and Ravi’s eccentric criminal brains. Even Babineaux nonetheless goofs off on the job however, while having to distract the CDC’s HR lady, while Liv and Ravi try to trick a retinal scanner.

The final result of the heist is pretty cool too, with Liv, Ravi and Babineaux eventually tricking Saxon into opening the vault for them, after faking an unsuccessful break-in. We even get to see Ravi go full-on zombie in a fit of rage, though disappointingly, nothing really comes of it. Regardless, Liv, Ravi and Babineaux manage to secure the cure formula in the end, getting away clean and eventually heading back to New Seattle, even if their entrance back into the city is bound not to go quite as smoothly. This is because a security camera apparently caught Ravi while he was stealing back the Freylich kids with Major, leading to Blaine and Don E. eventually holding Peyton and the kids at gunpoint! This sets up a really exciting final showdown against Blaine, with Peyton being the hero serving as an oddly effective and logical turn.

Really though, Blaine nonetheless deserved to be a bigger villain presence than he ultimately ended up being for iZombie’s final episodes. It still doesn’t really make sense that Enzo is serving as the zombie big bad in lieu of Martin as well, whose plan is presumably just left hanging, alongside the similar plans of Al and Mr. Boss. These unresolved villain arcs are the primary indication that iZombie’s narrative integrity is beginning to collapse in on itself, and it’s not ultimately looking like the show is going to tie up all of its lingering character arcs in a fully satisfying fashion. Still, with Enzo making a public show of terror against humankind, Dolly subsequently mounts up the Dead Enders for full-scale war, and this is made worse when Enzo somehow effortlessly steals all of Major’s soldiers with a few words, in another spectacularly lame and forced ‘twist’. This makes Major a lone operative that’s being hunted by both warring factions of New Seattle by this point, making the final push for the Max Rager at the Fillmore-Graves building much more difficult than it was initially supposed to be. 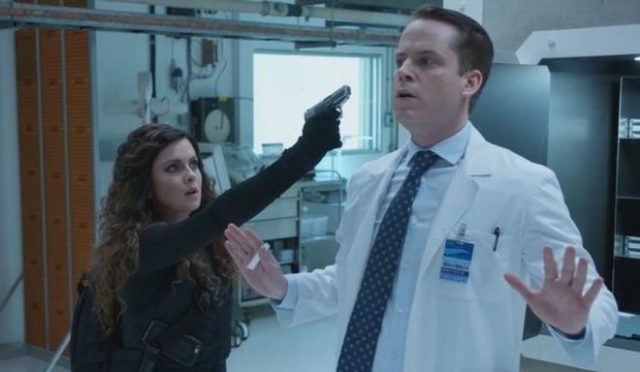 Despite the good amount of fun moments, “Bye, Zombies” doesn’t manage to salvage iZombie’s flagging climactic narrative. We still have the series finale to see how everything manages to come together, but by this point, it seems like iZombie is acknowledging that it’s written itself into a corner with its current villains especially, and has clearly thrown up its hands with the storytelling as a result. There’s still a chance that we could get a great final episode for the show after this, but perhaps all we can truly settle for is an end to iZombie that’s at least fun to watch. This is a shame, since the show’s final season has had some strong climactic storylines earlier on, though they don’t seem to be gelling into a very cohesive or satisfying whole for the finale. Again, we’ll see what happens with the one remaining episode. If nothing else, the ultimate effort to cure zombies once and for all should hopefully be a pretty memorable one!