Now that Preacher has entered the back half of its final season, we can start more quickly gearing up for God’s ultimate plan for Earth, which doesn’t appear to be anything good! “The Lost Apostle” involves a whole lot of races against the clock, and yet despite that, this episode strangely feels like it’s missing something. The show is still suffering from too many overly drawn-out, occasionally aimless storylines, even if the final result ties back nicely to the tease at the start of the season, wherein Jesse seemingly falls out of the sky, to his death.

With Tulip and Cassidy finally making it to Australia, they find themselves unable to speak to the police commissioner right away, until some quick flexing of their false American credentials anyway. After supposedly looking into the murderous preacher from the Jesus De Sade house however, Tulip and Cassidy are shocked to learn that Jesse has been killed! When they’re taken to the guilty party as well, they find none other than Eugene in handcuffs, who is taking the fall for Jesse’s murder. Obviously, neither Tulip nor Cassidy believe that Eugene is capable of such a terrible act, but Eugene is relentless in his confession. The evidence even entirely points to Eugene to boot, seemingly making Jesse’s death an open-and-shut case, and sending Tulip and Cassidy back to square one.

Obviously though, Jesse is alive. Much like with Eugene, if the Saint of Killers wanted Jesse dead, he would be dead. Instead, the Saint is forcibly enlisting Jesse along with him, declaring that the two are going to kill God together. Apparently, the Saint needs Jesse to kill God, likely due to Jesse’s Genesis abilities, and when Jesse refuses to comply, the Saint executes an innocent family to get Jesse to fall in line! Obviously, the Saint continues to be immune to the Word of God to boot, as is humourously re-established when Jesse tries it one last time after being captured, but regardless, Jesse and the Saint start wandering the Australian wilderness together.

This is a potentially interesting idea, but it’s frustrating that Preacher once again does so frustratingly little with what’s otherwise a promising character pairing. Rather than trade jabs at one another, fight over silly things, or reflect on their former animosity, and ponder where to go from there, or, well, anything, Jesse simply makes a few smart-ass comments, has a smoke, and that’s about all that happens of note. It feels like barely a few scenes later when Jesse is rescued by Tulip and Cassidy, who hijack a plane, and effortlessly pull Jesse into it, leaving the Saint in their literal dust, before he can shoot them down. Needless to say, this is incredibly convenient, especially after Tulip and Cassidy spend so much of the episode aimlessly driving around, chasing their tails. 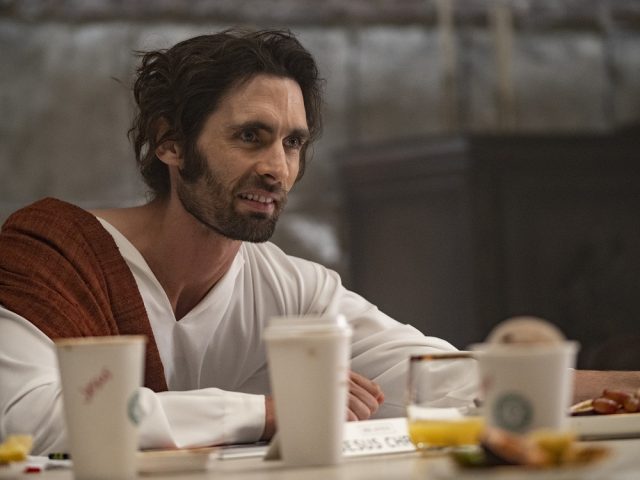 Similarly, Tulip and Cassidy don’t have much in the way of good character moments in this episode to boot. They at least get some solid humour as they go around harassing Australia’s various citizens and authorities, but outside of one compelling scene at a diner, Tulip and Cassidy feel like they barely do anything of meaning. Still, at least that diner scene does make up for it, which involves Cassidy inquiring about Tulip’s unopened letter from Jesse, and why Tulip won’t read it. Cassidy skims the letter to determine if it will give a clue to Jesse’s location, and then it doesn’t. It feels like this barely matters though, since Tulip soon after discovers God’s trailer, and in turn God’s plans for The Lost Apostle, by pure chance, which allows Tulip and Cassidy to undertake their highly unlikely rescue of Jesse, quickly pulling him away from the Saint of Killers.

Meanwhile, Jesus and Hitler continue to mindlessly argue details related to the coming apocalypse, and the resulting influx of souls, much to the chagrin of an increasingly bored Herr Starr. Herr Starr does get a chance to go to Australia soon afterward though, meeting God at The Lost Apostle, and once again being denied reward of renewed attractiveness. Then, God reveals that He is fully aware of Starr having lost Humperdoo, and subsequently punishes Starr by having a dingo bite his genitals off! God’s comical wrath is bad enough for Starr, but it’s even worse once Jesse, Tulip and Cassidy realize too late that The Lost Apostle is a trap! After God detonates a nuke, Jesse falls out of the plane, with Cassidy hanging on to him, before Cassidy’s arm begins to burn in the sun. Jesse then uses Genesis to force Cassidy to drop him, plummeting to his supposed death in the desert! Ah, so that’s what the meaning of this season’s mysterious Jesse intro was! Again, I doubt that Jesse really is dead here, at least not in the traditional sense, but this sure is an interesting predicament for Jesse’s character, who is probably about to face some otherworldly obstacle before making his way back to the land of the living. 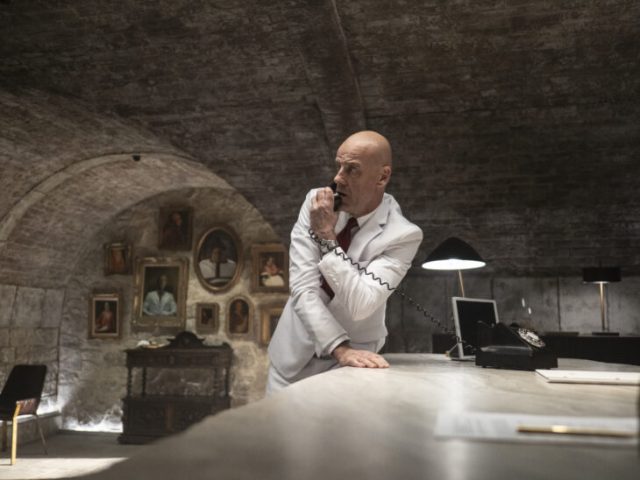 Disappointingly though, “The Lost Apostle” too often felt like a disposable filler episode for Preacher. Sure, this episode’s events finally reunited Jesse with Tulip and Cassidy, while handily bumping away the Saint of Killers and Eugene once again, but even though the huge cliffhanger ending was great, the rest of the episode involved too much wandering and tedious buildup. Very little was ultimately accomplished in the end, with most of the characters remaining in similar positions that they were already in during the previous week. Still, now that Tulip and Cassidy are presumably aware that God is about to start the apocalypse, and also had to witness Jesse plunge to his apparent death, the protagonists have their work cut out for them. I hope this doesn’t lead to more frustrating time-wasting with either of their characters in any case though, since they’ve already done too much of that throughout most of this season.