NOTE: Spoilers from throughout the sixth season of, “Agents of S.H.I.E.L.D.” are present in this review

Marvel’s Agents of S.H.I.E.L.D. made some big changes in the wake of its fifth season’s conclusion last year. These included real-world changes, such as the show moving to ABC’s Summer programming lineup with a shortened episode count, as well as in-universe changes, such as the death of the show’s main character, Director Phil Coulson. Even the Agents of S.H.I.E.L.D. showrunners were shocked to receive a renewal for Season Six as well, considering the show’s rather modest ratings, particularly after having deliberately planned Season Five to be the final season. It turns out that Marvel Television and ABC are not quite ready to say goodbye to these characters yet though, and we should be thankful! Despite the episode reduction and move to Summer, and despite the series now having to openly contradict the Marvel Cinematic Universe’s movie canon (or at least appear to do so), Agents of S.H.I.E.L.D. is going strong as ever in Season Six!

Those keeping up with the Marvel Cinematic Universe’s movies (and be advised, I’ll be talking about some of their events here, so if you’re behind on Marvel Studios’ movie selection, you have officially been warned!), will immediately be curious about how Agents of S.H.I.E.L.D. may be affected by Thanos’ fateful snap. Thanos’ snap would have obliterated half of all life in the universe at the end of Avengers: Infinity War, which took place around a year before Agents of S.H.I.E.L.D.’s sixth season begins. Well, the short answer is, nothing is affected by Thanos’ snap, at all. This will initially be a nuisance to Marvel fans and general MCU enthusiasts, since Agents of S.H.I.E.L.D.’s cast appears to have been completely unaffected by Thanos’ snap, which is never brought up in the storytelling either. If you’ve seen Avengers: Endgame, you’ll know that it took the MCU’s surviving heroes five whole years to devise a plan that successfully reverses Thanos’ snap, so that means that this season supposedly takes place when half of all life in the universe is still dead. It’s a distracting thing for Agents of S.H.I.E.L.D. to overlook, even if you could potentially justify this by saying that this season takes place in one of the alternate timelines that were opened up by Avengers: Endgame’s events, one where Thanos’ snap may not have happened.

Once you get past the fact that Agents of S.H.I.E.L.D.’s sixth season no longer fits smoothly into MCU continuity however, you can enjoy the season on its own merits, now disconnected entirely from events in Marvel Studios’ movies. Season Six really is a great season too, one that benefits from the reduced episode count, with a tighter and more personal storyline that isn’t constantly flipping story pods anymore, but is instead dealing with one especially intense scenario. The scenario in question involves a doppelganger of the late Phil Coulson, known only as ‘Sarge’, coming out of a portal and causing some unwelcome destruction on Earth. This is the first serious mystery facing new S.H.I.E.L.D. director, Mack as well, who is short-handed on top of that, since Daisy, Simmons, Piper and Davis have undertaken a mission to space in order to locate the still-frozen Fitz of their present timeline. May and Yo-Yo are at least still around for earthbound support on Mack’s end, but their personal issues create more tension around the office, just in time for Sarge’s appearance.

In the early reaches of the season, the dual story approach ends up working well in terms of both intrigue and excitement. The spacefaring storyline sees a move to some more varied locations in contrast to last season, for starters, with a highlight being the seedy casino planet of Kitson, where two of the season’s most entertaining episodes primarily unfold. Likewise, the mystery of Sarge and his crew, and their ultimate plans for Earth, also provides more gritty and pressing drama, forcing everyone that remains at S.H.I.E.L.D.’s HQ to confront the literal ghost of their former boss. Some of the character relationships suffer a little from the reduced episode count, most notably Mack and Yo-Yo having apparently broken up off-screen since Season Five’s events, only to get back together later in Season Six, but for the most part, the character work is done very well when Sarge is involved especially. Even in space though, plenty of great character storylines unfold, usually surrounding the desperation to find Fitz on a dwindling supply line, or the spacefaring characters having to confront the possibility of never making it back to Earth.

The payoff to the Sarge mystery is pretty crazy too, though in a good way. It turns out that Sarge is not in fact out to destroy Earth, but actually means to repel an invasion by a race of parasitic aliens called the Shrike, which come from a parallel dimension of sorts, one based around the energy of the destroyed monoliths. The Shrike are commanded by Izel, who is an energy being from said dimension that is given human form in the mainline MCU world, and who wants to convert Earth into her race’s new home. Neither Izel nor the Shrike exist in Marvel Comics lore, with both being completely made up for this show, but they nonetheless prove to be worthy and engaging threats to Agents of S.H.I.E.L.D.’s protagonists. Izel’s villainous agenda may ultimately be simple, but the way that she plays into the Sarge mystery is effective, especially when Izel inadvertently becomes the means through which Fitz and Simmons return back to Earth. This is after Fitz and Simmons accidentally pass their intelligence onto Enoch’s Chronicom race via a dream machine as well, who subsequently invade Earth after the Shrike are inevitably taken care of, thus leading into Agents of S.H.I.E.L.D.’s seventh and final season that’s set to air next year.

Even with so many changes to the protagonists’ status quo in the fallout of Coulson’s and Fitz’s deaths (even if another Fitz can now be revived and recruited in the present era), Agents of S.H.I.E.L.D.’s characters remain likable, sympathetic and compelling. Some supporting personalities definitely get more narrative love than others, but the character material throughout much of Season Six works well, even when the season is divided between multiple locations and perspectives. Izel may not be the most deep or memorable villain in the show’s history on that same note, but she does help to present a great payoff to the Sarge mystery, handily allowing the S.H.I.E.L.D. crew to finally resolve their grief around Coulson’s death, once they finally destroy both Izel and Sarge. Even without the pod-based story structure in Season Six, Agents of S.H.I.E.L.D. still feels like it’s finding interesting ways to keep viewers on their toes, and keep re-inventing itself with new and unpredictable scenarios. It looks like this is going to remain the case during the show’s final season next year as well, which is teased with Season Six’s ending having brought the characters into the 1920’s, wherein they are joined by a newly-formed LMD version of Coulson! 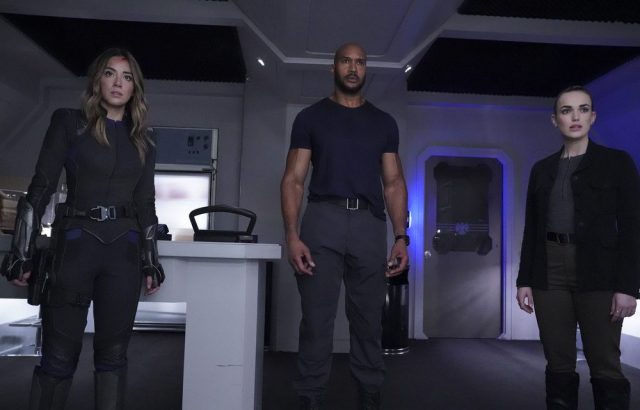 The fallout of Coulson’s death, and how S.H.I.E.L.D. tries to pick up the pieces while under Mack’s new leadership, nicely anchors Season Six and its interesting new threats, proving that Agents of S.H.I.E.L.D. hasn’t lost a step in its latest season, even after all of its big narrative shifts and production changes. Even while openly defying the current canon of the MCU, Agents of S.H.I.E.L.D. remains one of the coolest, most engaging and most surprising shows within ABC’s programming lineup. Frankly, it might fit in even better during the Summer lineup than the regular season lineup too! The reduction to thirteen episodes in Season Six allows the series to proceed at an extra fast-paced and engaging clip, even while largely sticking to one central conflict this time. Perhaps casting off the shackles of closely acknowledging present-era events in Marvel Studios’ movies also gives the show a new creative freedom, which makes it especially bittersweet that the series will be coming to an end next year. Still, it seems that Agents of S.H.I.E.L.D.’s resilience has held up wonderfully during the start of its bold new era, so I have every bit of faith that the series is set to go out on a high note in 2020, even with the great Phil Coulson now being gone, albeit never forgotten.

Agents of S.H.I.E.L.D.: Season Six Review
Marvel's Agents of S.H.I.E.L.D. delivers a leaner, yet no less compelling sixth season, remaining as interesting, exciting and cool as ever, even after its main character has died for good.
THE GOOD STUFF
THE NOT-SO-GOOD STUFF
2019-10-04
87%Overall Score
Reader Rating: (0 Votes)
0%