Left with seemingly nowhere else to turn, Morgan decides that he has no choice but to fall in with Virginia and her Pioneers during the fifth season finale of Fear the Walking Dead. It’s been a long, hard road, one that hasn’t yielded any apparent rewards, but even as Fear the Walking Dead’s latest season is faced with the prospect of a pretty grim conclusion, some nice moments of hope manage to creep out for the season finale, before the inevitable happens. We fortunately get some solid excitement as well, when Morgan’s crew takes one last shot at trying to hold off Virginia’s encroaching group, though the fallout from a previous encounter with the Pioneers ends up stalling this effort pretty quickly.

In terms of being engaging, “End of the Line” makes for a pretty solid season finale, particularly in its first half. After being forced to call Virginia, Morgan’s crew simply has to sit and look upon their failures, until Dwight shows up, having found several unattended horses by the old supply rigs of Morgan’s group. With the horses being available, Morgan’s group thus has a way to lead the herd of walkers out of Humbug’s Gulch, potentially giving them a fighting chance against Virginia and the Pioneers! After sending the rest of the survivors away, Morgan, Grace, John, June and Dwight thus lead the herd towards where Virginia is likely coming from, while Daniel and Strand keep a look out. 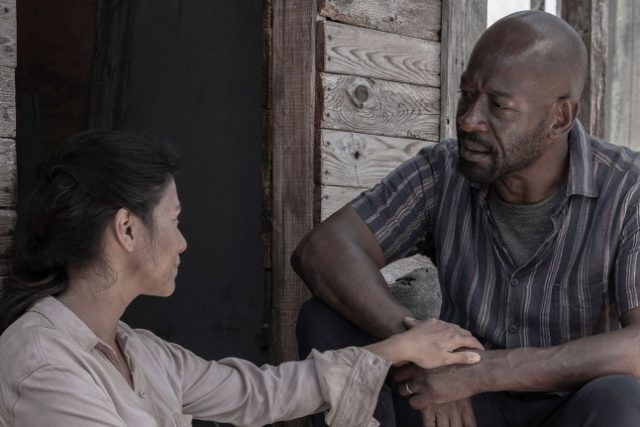 The operation originally appears to go smoothly, but after Daniel and Strand observe that Luciana has been taken along with Virginia (for some reason), they’re forced to call off their walker plan, resulting in the herd no longer being contained, and Dwight narrowly being killed! Dwight manages to escape, at the cost of his horse, but tries to lead the herd away, appearing to make another sacrifice play, a la Sarah from back in the oil fields. Once again though, Morgan refuses to abandon Dwight, and the other survivors on the horses lead the herd into the nearby river, where they’re washed away. This handily solves the problem of the walkers at Humbug’s Gulch, but it does leave Morgan’s group without a way to attack Virginia, just the same.

Once again out of options, the rest of Morgan’s survivors have to keep waiting. In fact, if there was any gripe one could have about this otherwise solid fifth season finale for Fear the Walking Dead, it’s the fact that the subplot at Humbug’s Gulch almost completely ended up being a waste of time. About the only noteworthy thing that happens here is Al discovering more evidence that Virginia is dishonest and can’t be trusted, with the horses having come from Pioneers that were killed, following Virginia murdering everyone in the Gulch, after they didn’t fall in line with the Pioneers’ vision. That’s well and good for cementing Virginia as Fear the Walking Dead’s new big bad, but we already knew that she was a wolf in sheep’s clothing. Doubling down on something so obvious simply serves to fill space in an episode that has far more interesting things going on elsewhere, particularly when Virginia’s arrival provides a nicely hair-raising way to close out the season.

The exception in this subplot material is John’s and June’s wedding, which is put together after some time painting and fixing up the Gulch, as if Morgan’s crew isn’t about to be taken away by Virginia and the Pioneers. It might have been nice if the episode focused a little more on these little character moments, and not probing the obvious with Virginia, especially since Strand’s efforts to parlay with Virginia don’t appear to make any difference either, essentially just taking him off-screen for no real reason. Regardless, the long-awaited wedding between John and June served as one of this episode’s easy highlights, with Jacob officiating, Charlie playing music, and Dwight donating his old wedding rings to complete the ritual. It’s an effectively happy moment that’s well-earned, and it complements the otherwise somber conclusion of Season Five pretty well.

After the wedding, Virginia does arrive as well, subsequently forcing Morgan to admit that he’s out of plans. Morgan then successfully bargains for the survival of everyone in his company, including Grace, who apparently doesn’t have cancer, but is actually pregnant, as confirmed by one of Virginia’s doctors! This is a bit head-scratching, since Grace had absolutely no pregnancy symptoms throughout the whole first trimester, but whatever. Like everyone else however, Grace is separated into a different vehicle, and taken to some unknown part of the Pioneers’ massive territory. Seeing character alliances fracture is the hardest part of this sad turn for the protagonists, as even the newlywed John and June are forcibly taken apart from one another. Virginia then tops off her capture of Morgan’s crew by attempting to shoot Morgan dead as well, only to miss and get him in the shoulder, once Morgan tries to smack the gun away with his staff!

Since walkers subsequently draw near from the gunshot, Virginia is forced to leave Morgan for dead rather than finishing the job, thus closing out the season with an ailing Morgan seemingly about to be eaten by the walkers, and declaring into his walkie that everyone needs to live, even if it’s without him. This made for an awesome cliffhanger ending for Fear the Walking Dead’s fifth season, leaving Morgan’s fate very nicely uncertain. I imagine that someone is going to bail Morgan out once Season Six kicks off next year though, since he’s essentially the main character of Fear the Walking Dead at this point. Even so, “End of the Line” helped to make up for some of the less effective moments of Season Five’s earlier episodes especially, by at least bringing everything together with just the right mix of optimism, disappointment and dread. This season finale presents a far more downbeat and depressing ending than the extra hopeful ending of last season, but that’s fine, because Fear the Walking Dead is delivering some appropriately imposing and effective villains to go with it. I’m happy that Virginia is going to continue being the main threat of the show into Season Six, and the separation of the characters should provide a strong increase in scope next season to boot, even if it may slowly start becoming tougher to tell the difference between this spin-off, and the mainline Walking Dead series.