With the apocalypse facing humanity, and both God and the Grail seemingly having prevailed over the mission of Jesse Custer and his friends, Preacher’s final episode appears to paint a pretty grim picture for humanity. Ultimately though, you can imagine that a show as twisted and fun as Preacher wouldn’t really aim to end on a down note, and fortunately, there are plenty of surprises left to enjoy in, “End of the World.” There’s a lot to wrap up, and it’s easy to get the sense that Preacher didn’t ultimately get to air for as long as the showrunners would have liked, particularly considering some of the hasty and under-developed narrative resolutions that some characters get in this series finale, but the show does nonetheless manage to close out on a fun and memorable note.

Early in the episode, we get lots of fighting, which is undertaken in an almost tongue-in-cheek way, as brawls break out all over Masada. Jesus and Hitler are still going at each other, Jesse now finds himself fighting the Saint of Killers alongside the parents of Genesis, and even Tulip and Cassidy get into a scrap, after Tulip is broken out of confinement by Featherstone, and corners Cassidy, insisting that they kill Humperdoo, and end the apocalypse before it starts. There’s even something of a confrontation between Featherstone and Herr Starr, as Starr tries to tempt Featherstone one last time, with an underwater romantic getaway that will insulate them from the apocalypse, and allow them to have a future together. When Featherstone decides to try and kill Starr in response however, Starr ends up being quicker, killing Featherstone with a bullet to the head, and seemingly getting away from the Grail, scot free. 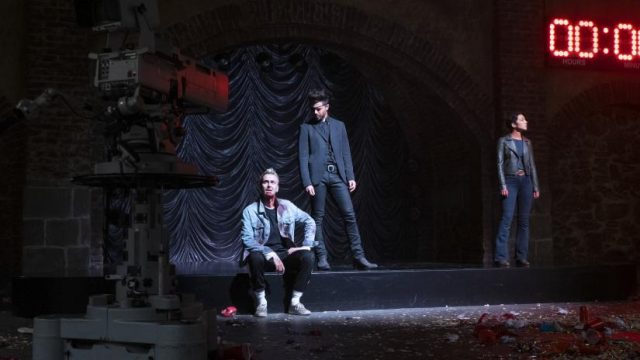 The fight between Tulip and Cassidy is the stronger between the protagonists’ final series of duels, particularly since the parents of Genesis still don’t end up serving the plot very much. Both are simply eliminated by the Saint of Killers, with the only reason that they’re present being to give Jesse a clue as to how to resolve the situation. Somehow, after promising the Saint a return to his family, Jesse is able to just kill the Saint after a voluntary surrender upon hearing this clue, just like that. Admittedly though, this does have a pretty great payoff for later, especially for fans of Preacher’s source comics. As for Tulip and Cassidy however, Tulip eventually ends the fight by putting two bullets in Cassidy’s chest, before Cassidy finally has to capitulate to doing the right thing. Thus, before the Grail can get to him, Cassidy shoots Humperdoo and kills him, stopping God’s plan to destroy the world right in its tracks.

This is also around the point when Jesus successfully strangles Hitler to death, and this is where the first of a few head-scratching character resolutions comes in. Does Hitler simply go back to Hell then? Or, if he’s killed by a divine person, is Hitler permanently gone? In that case, who’s running Hell? Regardless, Jesus turns down being the Messiah when God offers the role to him, and this basically leaves God out of options. It’s a bit of a stretch that God wouldn’t destroy the world anyway, if He’s as powerful as he claims, but either way, God ends up on the run, with Jesse using Genesis to order the entire Grail to hunt God down. It’s interesting to see how averting the apocalypse happens with a sense of quiet, almost underwhelming ceremony, but honestly, it fits this show’s subversive sensibilities pretty well, especially when some of the best narrative payoffs from this series finale are still yet to come.

A time jump of two years then takes place after God flees the Grail, with Jesse and Tulip having returned to their life of being freewheeling criminals, having also had another daughter in the meantime, while Cassidy has gone off to travel the world. There’s a lot glossed over with Cassidy’s fateful decision to defy God in the end, and this is one of several frustrations that feel a bit overlooked in this final episode for Preacher, but the superior resolution for Jesse and Tulip helped to make up for this. Jesse in particular gets a great final moment when God is finally found by the Grail’s possessed agents, whom Jesse then releases, before asking God his remaining questions about life and the universe. When Jesse realizes that God’s vision is simply about being loved, despite the presence of free will however, he knocks God around a bit, and then voluntarily releases Genesis, warning God never to return to Heaven. It’s a badass and satisfying moment, and one that’s mostly taken directly from the source comics to boot, creating a similar sense of awesome righteous indignation that Jesse manages to achieve during his final encounter with God.

A couple of other resolutions are quickly addressed in this final episode too, such as Eugene becoming a rock star, and Jesus working in a hardware store, both of which are pretty random. Preacher having some senseless character and story resolutions certainly isn’t out-of-character for the show, but the fact that they’re so quickly glanced over is pretty annoying. Fortunately, God at least gets His just desserts upon inevitably returning to Heaven though, where the Saint of Killers waits for him. In another inspired turn taken straight from the source comics, Jesse took the Saint’s confession and absolved him of his sins before striking him down, which guarantees the Saint passage into Heaven. After slaughtering the guards of Heaven’s throne room as a result, the Saint then shoots God dead after a brief bribery attempt, assuming leadership of Heaven himself. We don’t ultimately get to see the Saint reunite with his family, but in seizing control of Heaven, I imagine that the Saint can finally get what he wants off-screen anyway, having finally achieved his well-earned justice, and rest.

Things finally conclude with a subsequent forty-year time jump, after Jesse and Tulip have both passed away in their 80’s, wherein Cassidy meets with Jesse’s and Tulip’s adult daughter, once again played by Ruth Negga. After Cassidy recounts some details about his late friends, he then wanders into the sun and seemingly commits suicide, with Preacher ending on this bittersweet note of friendship, and vigilante justice. “End of the World” delivers a fine balance of humour, violence and character to close out AMC’s cult favourite dramedy series on, providing strong resolutions for Jesse, Tulip, God, Herr Starr and the Saint of Killers in particular, even if not every personality gets quite as satisfying a wrap-up. Like I said, it thematically fits that Preacher’s final episode doesn’t always make perfect sense, but it does nonetheless seem clear that, despite this being a pre-determined final season by AMC, the show was clearly originally planned to stay on the air for a year or two longer than it ultimately did. Still, Preacher did at least manage to mostly go out on the terms it wanted to, ending the reign of its tyrannical God, while also freeing the remaining characters to pursue their own passions, for better or for worse.

Preacher Series Finale: "End of the World" Review
Preacher's final episode, "End of the World" gives the series a fittingly violent and crazy wrap-up, even if some characters get lost in the shuffle.
THE GOOD STUFF
THE NOT-SO-GOOD STUFF
2019-10-17
85%Overall Score
Reader Rating: (0 Votes)
0%