Despite the show presenting almost a total lack of buildup for the imminently-approaching Crisis on Infinite Earths crossover event, Supergirl nonetheless had plenty of excitement in store for this week’s midseason finale, excluding Supergirl’s crossover episode that’s scheduled to kick off the Crisis on Infinite Earths event next Sunday. “The Wrath of Rama Khan” pretty much says it all from the title, as Leviathan’s current boss decides to enact one blunt effort to wipe out humanity with a super volcano. That’s just one crisis ironically facing the Supergirl universe ahead of Crisis on Infinite Earths though, as Lena also decides to enact her plan to mentally pacify the world’s population, using Lex’s satellite network, and the power of Myriad.

This all leads to a very thrilling episode of Supergirl, one that has all hands on deck at the DEO, as Kara and her friends must avert two global-scale disasters in just one episode. Fortunately, after reconciling with his brother, J’onn is able to recruit Malefic to help as well, despite the distrust of Alex and most of the DEO agents. This was a great opportunity to put Malefic’s redemption, and J’onn’s faith in his brother, to the ultimate test. Malefic is nonetheless placed under lock-and-key at the DEO office, with Alex ready to neutralize him if he decides to go rogue again, but J’onn insists that Malefic must be trusted in order to save the world. Even Kara decides to vouch for Malefic in the end, saying that she has to believe people can change, since that will be necessary to prevent Lena from making a horrible mistake. 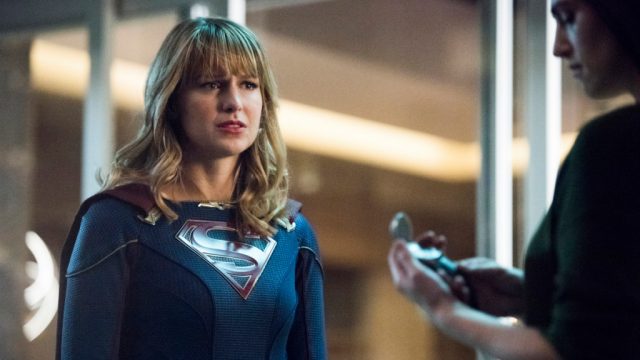 This lays out a foundation for an episode that finely balances strong action with an effective theme of believing that people are not defined by their pain, nor their past mistakes. The cast of characters was nicely streamlined here too, with Nia, William and Kelly most notably sitting out this episode, alongside any other ongoing story development outside of the DEO’s purview. Andrea did show up, but as Acrata, when she’s taken on a decisive job by Rama Khan, involving the activation of a dormant super volcano in National City. That’s a hell of a landmark for the show to never mention before, but in any case, Acrata warns the DEO with a split-second teleportation, before Rama Khan drags her back, and forcibly links her to his Staff of the Shadow World. Before Acrata can be saved however, the DEO still has to deal with the immediately-known threat behind Lena’s use of Myriad, which Kara immediately warns Brainy and Alex about, after they bust her out of confinement in the Fortress of Solitude.

The clashing in principles between Kara’s idealism and Alex’s pragmatism played very well in this case. This was especially evident when Kara tries to rig a hologram to plead with Lena one last time, only for Alex to load the hologram with a virus, unbeknownst to Kara, which stalls Lex’s satellite network, and slows the launch of Lena’s Q-Waves. There’s no time for Kara to be too angry at Alex though, since Kara and J’onn eventually have to go and rescue Acrata, and take down Rama Khan in the process. This duel is fairly exciting too, with J’onn phasing down to help Acrata, while Kara herself has to hold off the devastatingly powerful Rama Khan. Naturally, since we have an even bigger Crisis headed to the Supergirl universe next week, Kara and J’onn destroy the staff, stop Rama Khan, and free Acrata in the end, though Rama Khan does get away. This doesn’t matter too much though, since Rama Khan ends up being demoted for his failure, with Gamemnae taking his leadership position within Leviathan, at the command of another mysterious superior. I guess we’ll see how this ends up affecting the Supergirl universe in 2020. 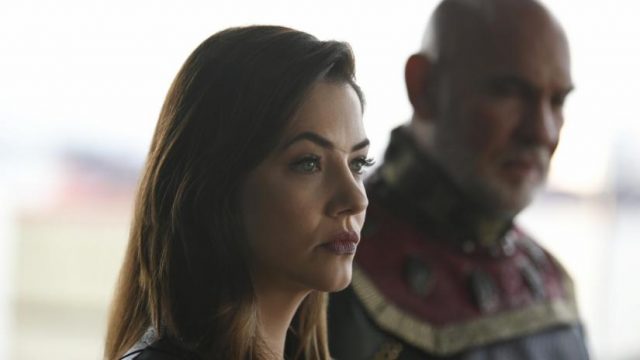 Despite the outward excitement of an alien-powered duel between Kara, J’onn and Rama Khan, the Lena material didn’t disappoint either, as Alex must make the impossible decision of trusting Malefic, despite her professional instincts telling her that J’onn’s wayward brother is still a threat. Lena, meanwhile, still honestly believes herself to be doing right by the world, having to work with Hope to tiptoe around Lex’s overwrought security measures. This is a potentially interesting idea, though the Lena/Hope scenes weren’t nearly as exciting as the core story material at the DEO. Despite Lena’s claims that Hope could be killed, along with Eve, Hope/Eve is never under any real danger, even amid Lex’s outrageous security measures. Hell, when Alex finally does trust Malefic, complete with disabling the DEO’s psychic inhibitors, so that Malefic can utilize enough inception power to disable Myriad and stop Lena’s plan, Hope just takes the fall for Lena’s crimes anyway. I guess that means that Eve lives, albeit still through Hope, but the amount of false tension on Lena’s end of the storytelling was a bit annoying, especially when it’s equally obvious that Lena won’t be any more successful than Rama Khan, due to the bigger danger from next week’s Crisis on Infinite Earths kick-off that Supergirl will be hosting.

Oh, and speaking of Crisis on Infinite Earths, Supergirl finally got to have some honest-to-goodness teases for that at the end of this midseason finale. With Malefic’s current story arc more or less resolved, surprisingly quickly, in fact, J’onn gives his brother his spacefaring car as a gift, and petitions him to help M’Gann liberate Mars from the ongoing White Martian scourge. This is a good resolution for Malefic, particularly when the Monitor appears soon after Malefic’s departure, to reveal that he set Malefic free from the Phantom Zone as a test for J’onn, after seeing that J’onn was a capable fighter during last year’s Elseworlds crossover event, but one that was clearly burdened by his past on Mars. With J’onn now free of guilt and torment, the Monitor can relay the information about the coming Crisis to him. Shortly afterward, the Monitor also visits Lex, who is playing chess with himself in the Monitor’s pocket dimension. The Monitor reveals that he resurrected Lex because the world will need a mind like his during the Crisis, suggesting that Lex could potentially see a heroic turn during the imminent crossover event, even if it’s probably not one that will stick. I guess we needed someone to fill the important Alexander Luthor role from DC Comics’ original Crisis on Infinite Earths event from the 1980’s though. 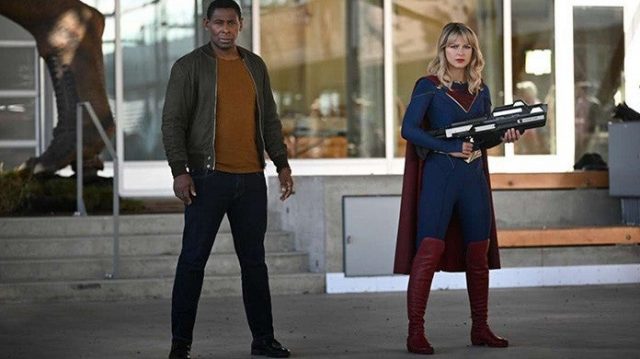 “The Wrath of Rama Khan” delivered two exciting crisis situations for the DEO, which are ironically the calm before the storm, considering that next week will see the Crisis on Infinite Earths event begin on Supergirl. The DEO characters working together to prevent not one, but two global-scale purges of differing natures, made for lots of thrilling entertainment, while also satisfyingly trimming Supergirl’s narrative focus and preachiness, in favour of a genuinely exciting climax to Season Five’s front portion of episodes. Even after that was done, we got a great setup for Crisis on Infinite Earths to follow this as well, with J’onn passing his test from the Monitor through redeeming Malefic, along with confirmation that Lex has indeed been resurrected, and is simply biding his time in the Monitor’s pocket dimension at this point. With rumours mounting that the Supergirl universe will end up being merged with the main ‘Earth-1’ setting of Arrow, The Flash, Legends of Tomorrow and Batwoman after the Crisis on Infinite Earths event concludes as well (and there’s precedent for this belief, since DC Comics’ original Crisis on Infinite Earths event ended up folding several parallel DC worlds into one ‘New Earth’), it will be especially interesting to see what’s next for the separate agendas of Leviathan and Lena alike, should that end up being the case. Now that Supergirl has stuck the landing with a strong finish to its proper 2019 run of episodes though, Kara and the other heroes of Earth-38 can finally put their current foes aside for a bit, since the real threat to Earth-38’s existence has finally made it to their metaphorical doorstep.