NOTE: Full spoilers for this episode of, “Watchmen”, including a major character death, are present in this review

The long, convoluted narrative of HBO’s Watchmen is finally starting to come into focus. There are still some essential pieces of the mystery left unrevealed in, “An Almost Religious Awe” however, even as the previous episode appeared to spell out the true agenda of the Seventh Kavalry. It turns out that there are even more forces ready to, “Change the world” in this episode, as Angela finds herself under a Nostalgia rehabilitation treatment, overseen by Lady Trieu, while Laurie ends up in her own mess, after stumbling upon a surprising connection to the Seventh Kavalry during an investigation.

Since she has to be subject to Lady Trieu’s experimental therapy, Angela takes yet more trips into the past in this episode, albeit this time her own, rather than Will’s. This provides a convenient opportunity to start filling in another big hole within the show’s narrative; Angela’s past in Vietnam. At first, this amounts to a few fairly reasonable turns, namely that Angela’s parents were killed in a terrorist attack, and that she briefly encountered an aged June Reeves, who also died of a heart attack, shortly before formally adopting Angela. It’s probable then that Angela stayed in Vietnam throughout her youth, and that June is her reason for wanting to take a job with the Tulsa PD. That’s not the only big payoff that we get from Angela’s past though, even if the other elephant in the room (which is all too literal at one point later in the episode!), is being left for next week’s episode.

Whether or not Angela is truly in control of events here is nicely left up to interpretation. Even as her parents, and later June, are seemingly killed by random events, the young Angela is given a police badge and told to find the woman who gave it to her in adulthood, which seems to suggest that Angela ending up in Lady Trieu’s care is no coincidence. Another interesting mystery is revealed here to boot, when this episode confirms that Lady Trieu’s ‘daughter’, Bian, is actually Lady Trieu’s mother, specifically a young clone of her, whom Lady Trieu is gradually implanting with her mother’s old memories. This idea of appropriating and manipulating consciousness, memory and identity once again calls back to the idea of cover identities versus real identities that serves as one of the thematic cores of Watchmen as an overall brand, and I imagine that this will also come into play with the Seventh Kavalry very soon.

Speaking of the Seventh Kavalry, it’s Laurie that ends up moving their plot forward this week, with Looking Glass apparently MIA. Instead, Petey simply finds that five Seventh Kavalry members, the same ones that appeared ready to attack Looking Glass at the conclusion of the season’s fifth episode, have all been killed, with Looking Glass himself nowhere to be found. There’s no time for Laurie to ponder that mystery though, since a visit to Jane ends up revealing that Jane is in league with the Seventh Kavalry, and so was her late husband. This results in Laurie being dropped down a trapdoor (how… odd), and having Keene attempt to spill his evil plan to her, which is humourously positioned as an undressing of the old villain plan trope. Still, it does lead to another key motivation behind the Seventh Kavalry being unveiled at last; Keene plans to become the next Dr. Manhattan! 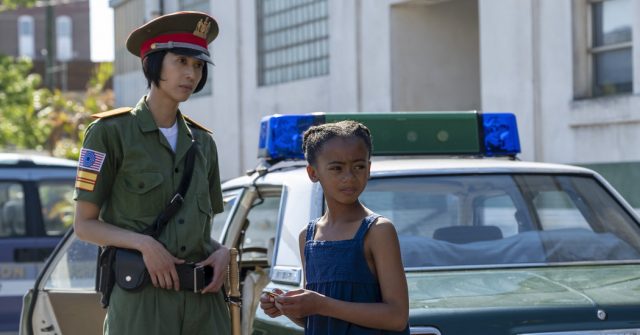 Thus, we come to what the core of the overall mystery behind HBO’s Watchmen seems to be throughout its debut season; Dr. Manhattan. After previous hints that Dr. Manhattan has left Mars, which is confirmed once Angela finds out that Lady Trieu has been hoarding information from her ‘Manhattan Booths’ (not even surprising that Trieu owns and operates those), this would appear to suggest that Dr. Manhattan is indeed behind the imprisonment of Veidt over on Europa. Oh, and speaking of Veidt, we once again get an interesting check-in with him in this episode, after Veidt is put on trial, and supposedly sentenced by a jury of pigs. Veidt even leans into this farce to boot, merely farting when asked to plead his case, before the Game Warden declares him guilty. The Veidt subplot was especially weird in this episode, and the show putting it in the middle of the story for once, rather than the end, felt a little strange and clumsy. Veidt must have a connection to the show’s overall mystery, but the series still isn’t ready to fully reveal its hand here, so for now, Veidt’s affairs remain little more than humourous distractions.

Like I said though, the focus isn’t on Veidt at this point in the narrative– It’s on Dr. Manhattan. After Lady Trieu confronts Angela with the knowledge that Dr. Manhattan has indeed left Mars as well, and is in fact in Tulsa, wandering among humankind, the episode saves its biggest and best plot twist for last. After Angela rushes home, barging through a barricade set up by Red Scare and Pirate Jenny (who apparently mean to arrest her), she picks up a hammer, as Cal wakes up, asking what’s going on. Instead of telling Cal what’s happening though, Angela provides a cryptic response, saying that she was happy to be together with Cal, but that it’s time for him to come out of his shell. We then see Angela bludgeon Cal to death in a rather shocking manner!… Or so it appears! While Cal is ‘dead’, more or less, a blue glow emanates from his body in the closing seconds of the episode. This confirms that not only has Angela been allied with Dr. Manhattan the whole time, but that she also ‘hid’ him within her own fake husband! This obviously raises another big question about Cal and where he came from, not to mention how Angela ever met Dr. Manhattan in the first place, but it seems like this is going to be a big focus in the next episode, the penultimate episode of Watchmen’s debut season.

HBO’s Watchmen is really on a roll now, and, “An Almost Religious Awe” is another home run for the show. While the Veidt subplot didn’t fit in quite as smoothly in this case, the brilliant foreshadowing of Dr. Manhattan’s true location, and ultimate revelation that he was within Cal the whole time, helped round off an episode that was already rich with mystery and intriguing character development, particularly for Angela and Lady Trieu. Even the Seventh Kavalry had a pretty cool turn this week, after Jane helps them capture Laurie, and reveal that, not only do they seemingly want to take control of the world around them, but that they want to make Keene, their leader, into the next Dr. Manhattan. The idea of the Seventh Kavalry being motivated by a, “Tipping of the scales” very far against white men, or so they claim, is all too topical and timely, and something that should have Watchmen ready to conclude its first season on a powerful thematic message in a couple of weeks. Every time the show reveals a little more of its ultimate message and mystery each week, it just keeps getting more and more exciting. This is a show that rewards patient, observant and introspective viewers, and as weird and surreal as it can sometimes get, it’s always got another clever turn waiting to make all that weirdness seem strangely obvious, at least in the context of this rather eccentric world.