It’s an exciting occasion for The Mandalorian this week, since the titular character is finally landing on Tattooine! After some teases and imitations through previous settings, it’s great to see The Mandalorian actually make a stop on Luke Skywalker’s home planet, though if you were hoping for an especially noteworthy development for the series on Tattooine, you’ll be disappointed. Instead, “Chapter 5: The Gunslinger” presents another filler storyline, one that hovers around the half-hour mark, delivering more cool guest stars and engaging action, but not really doing much to proceed the overall narrative of the show.

After managing to evade another bounty hunter in space, The Mandalorian’s ship becomes damaged from the dogfight, resulting in him having to land on Tattooine, like I said. Upon landing, The Mandalorian is ‘greeted’ (not too warmly), by the local mechanic, Peli Motto, played by Amy Sedaris, who subsequently tells him that he doesn’t have enough money to pay for the repairs, especially after The Mandalorian adamantly refuses that droids be involved. Forced to take another job, The Mandalorian then simply walks away from The Child, whom Peli ends up babysitting, using it as an excuse to jack up The Mandalorian’s fee even further.

There’s an interesting premise on display here, particularly when The Mandalorian takes a trip to Mos Eisley, another recognizable location from the original Star Wars movie trilogy, and ends up encountering a rookie bounty hunter, Toro Calican, played by Jake Cannavale. The rookie Calican has taken a job hunting down an elite criminal enforcer, Fennec Shand, played by Ming-Na Wen (one of the coolest guest stars of the episode!), but is naturally in over his head, since Shand is one of the most dangerous people in the sector. The Mandalorian thus agrees to help with the job in exchange for all of the pay, since Calican simply wants to be let into the Bounty Hunters Guild, and doesn’t care about making money.

This provides the best portion of the episode, when The Mandalorian and Calican have to take some Speeder Bikes into the desert, briefly negotiating with some Tusken Raiders, before finding a dead bounty hunter waiting for them. It turns out however that this is merely bait, with Shand taking shots at The Mandalorian and Calican using a high-powered sniper blaster! The Mandalorian’s Beskar armour protects him from damage, but Calican is very vulnerable, forcing an extended sprint through the nearby flank, and making use of Flash Charges all the while. It’s an exciting and tense sequence, one that almost sees The Mandalorian picked off for good when he’s shot off his Speeder Bike, only for Calican to provide enough of a distraction before The Mandalorian can hold up and capture Shand. Well, that was pretty easy, I guess. 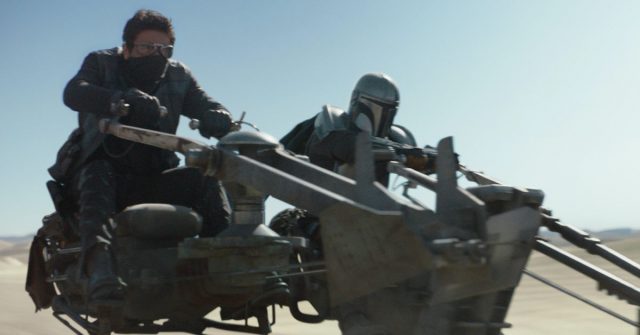 There was one last twist in store here, namely when Shand tries to manipulate Calican into letting her go, and turning on The Mandalorian, since The Mandalorian is a traitor to the Guild, after his actions on Nevarro (which is apparently the name of the planet that The Mandalorian was formerly based on, where The Client was). Instead of letting Shand go however, Calican shoots her, leaving her for dead, before booking it back to Mos Eisley, and taking both Peli and The Child hostage. The Mandalorian then has to confront a troubling hostage situation for the final moments of the episode, but after another simple Flash Charge trick, he shoots Calican dead, with The Child simply scurrying away to some nearby crates, somehow. Well, this was pointless, since Calican was ultimately a total pushover. Thus, having seemingly taken Shand’s money, and giving it to Peli, the repairs are covered, and The Mandalorian can take The Child away to yet another planet. Apparently, Shand may not be a fully-neutralized threat though, since a mysterious person finds her body in an epilogue scene, suggesting that she may come back to menace The Mandalorian again in future!

As exciting as it is to think about Ming-Na Wen having more than one appearance on The Mandalorian however, “Chapter 5: The Gunslinger” nonetheless feels like a disappointing speed bump for the series. This is a textbook definition of a filler episode, which is frustrating, since The Mandalorian’s first season will only span eight episodes in all. As cool as it was to have the show go to Tattooine, and put the title character against another dangerous enemy, there was disappointingly little done with the trip to such an iconic Star Wars location, especially when The Child ended up being completely benched in this case. So far, The Mandalorian attempting a planet-of-the-week narrative doesn’t seem to be working very well, especially when its conflicts have now become too small and localized. Like I said before, maybe the show’s first season should stick with a more serialized, thriller-esque format, since I’m not currently feeling the tension with The Mandalorian’s fugitive career.