Better Call Saul has already kicked off its fifth season on a sublime note with its season premiere from this same week, and fortunately, in moving to its regular Monday night timeslot for the second episode, the following offering from the series also delivers. “50% Off” continues to have Jimmy on the rise while starting the new law practice of ‘Saul Goodman’, something that continues to have Kim doubting her future prospects with Jimmy. Meanwhile, Nacho gets ordered to get closer to Lalo by Fring, under threat that Nacho’s father will come to harm, should Nacho not comply.

This episode presents an interesting series of events that once again tie Jimmy in with the criminal underworld, despite his outward good intentions. This stems right from the start of this episode in an inspired way, when Jimmy’s initial ‘50% off’ promotion deal hypes up some junkies, who just so happen to be getting their drugs from Nacho’s associate, Mouse. After the junkies cause trouble in the neighbourhood, cops end up patrolling the area to boot, only for those same drug addicts to order a greater supply the next day, causing a problem that eventually warrants Nacho’s attention. It’s really cool when Better Call Saul manages to find a smart way to present this kind of criminal domino effect, particularly when it inadvertently stems from Jimmy’s own desires to get ahead.

Speaking of that, Jimmy’s excitement leads to him urging Kim to check out a high-end house with him, which the two have fun in for a bit, before Kim seemingly dismisses the prospect that the two attorneys could ever own it. This was a protracted sequence, but it was one that continued to highlight just how much Kim’s faith in Jimmy has become shaken lately. Kim is holding true to their relationship, but the two confessing issues to each other, while still having fun around the house, nicely highlights how fragile their relationship is becoming. Naturally, Jimmy’s actions with Kim’s client that wanted to go to trial also come into play here, though Jimmy does at least try to admit that it’s wrong to lie about the law, despite the fact that he’s up to his old tricks not long after.

Jimmy even goes as far as paying off an elevator technician to force an early meeting with a prosecutor, related to Jimmy’s unusually high pile-up of cases. Jimmy’s early promotions and rapid growth have resulted in ‘Saul Goodman’ already having 45 (!) clients to manage, and Jimmy is intent to follow through on his pledge for all of them. The sheer lengths that Jimmy will go to for his clients is admittedly kind of noble, in its own bizarre way, and seeing Jimmy once again bend the system for his own ends continues to provide a smart balance of moral disregard and eccentric anti-heroism. I doubt that Kim will find out about Jimmy’s latest shenanigans anytime soon too, particularly when Jimmy finds himself in a very different batch of trouble within the final seconds of this episode, which bring him squarely back into Nacho’s orbit. 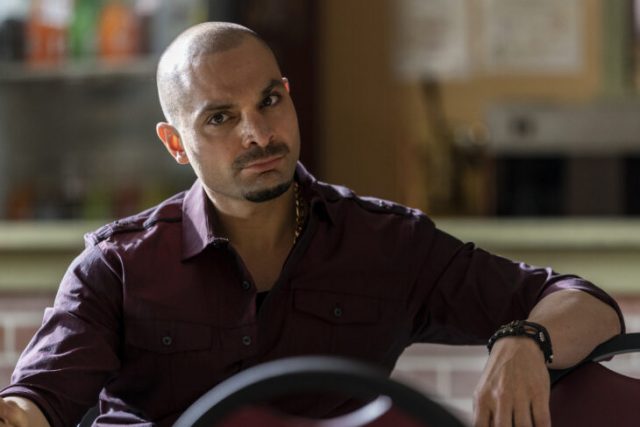 This incident stems from Jimmy’s inadvertently-caused ‘50% off’ glitch with the aforementioned junkies, which eventually results in the two druggies not receiving their product, due to the drain pipe that transmits the drugs jamming. After some more unfortunate events related to this turn, Krazy-8 then ends up getting pinched by the cops, even if this does provide a good opportunity for Nacho to prove his loyalty to Lalo, boldly grabbing drugs before the cops can find them, while sneaking under the cops’ very noses. Nacho’s combination of resourcefulness and desperation is very compelling to see unfold here, which in turn smartly culminates with Nacho forcing Jimmy into his car at the end of the episode, likely to coerce legal counsel for Krazy-8. This is likely the beginning of Jimmy’s proper retaining by the Salamanca cartel, as depicted in Breaking Bad, now that Jimmy has fully committed to the attorney identity of ‘Saul Goodman’, a name that will soon become very familiar to the worst lawbreakers of the region.

Mike once again returns in this episode as well, though as with the season premiere, he’s saddled with a weaker storyline, which doesn’t contribute much of value to this episode. After Mike finds himself aimless, following him having to execute Werner, and turning down Fring’s business proposal, Mike agrees to babysit Kaylee after her mother has a work emergency, which initially seems to go fine, until Mike blows up at Kaylee after she asks too many questions about Mike’s dead son. That’s pretty much the whole subplot. Mike’s guilt manifesting as anger that’s misdirected at Kaylee makes some degree of sense, but the blowup feels very forced, and the subplot is just left hanging for now, simply existing to fill up runtime in an episode that really didn’t need Mike in it, frankly. Mike is getting to the point where he needs to swallow his pride and embrace his destiny with Fring, because with Werner dead, it feels like his character once again has nowhere else to go on Better Call Saul.

Outside of Mike’s latest disposable subplot however, “50% Off” continues to have Better Call Saul shining for the debut of its fifth season, smartly tying its storylines together through unexpected and creative means, particularly as Jimmy once again finds himself inadvertently contracted to the criminal underbelly of Albuquerque. The slow burn of Jimmy’s downfall continues to excel, most notably with Kim, whose faith in Jimmy continues to ebb away a little more every week. That will likely be put aside for the short term however, since I doubt that it will go unnoticed by Kim that Jimmy is back to being forced to work for Nacho, and by extension, the Salamanca cartel. All the while, Lalo continues to question Fring’s cover story about his superlab, which is a small footnote in this episode, but one that also hints at Fring’s rapidly-approaching problem with the Salamanca cartel, should Lalo find any compelling evidence as to what Fring is actually up to. Now that Better Call Saul’s ending has been confirmed by the showrunners (even if it’s next season), the foundation of Breaking Bad is coming into focus more quickly than ever. I hope Mike gets that memo too, because his moping over Werner so far isn’t doing much other than leaving his character arc spinning its wheels for the time being.