AMC’s The Walking Dead TV universe has been noticeably struggling to maintain widespread viewer interest over the past several years, consistently threatening to unseat its flagship series’ current position as cable’s #1 TV drama. With first spin-off series, Fear the Walking Dead also settling into a second-tier holding pattern by this point, AMC has decided to roll the dice on a second spin-off series, one that aims to flesh out yet another formerly unseen corner of The Walking Dead’s TV universe. This spin-off, eventually being titled, ‘The Walking Dead: World Beyond‘, was originally meant to begin airing in April, but due to production complications from the ongoing COVID-19 pandemic, its debut eventually got pushed to the start of October. Now that this new show has finally arrived though, we can see if it truly is a new lease on life for AMC’s flagging post-apocalyptic universe.

Still, maybe The Walking Dead: World Beyond will eventually be a valuable contribution to AMC’s The Walking Dead TV universe, especially when it aims to finally answer the questions surrounding the mysterious ‘Three’, or three-ringed communities. These are the same ‘Three’ that smuggled Rick Grimes away from his likely demise on The Walking Dead, at the behest of former Scavenger leader, Anne/Jadis, and the same ‘Three’ that were briefly documented by Al after she was temporarily separated from Morgan’s group on Fear the Walking Dead. Clearly, these communities, whom we already know have nothing to do with the next big antagonists coming to The Walking Dead, the Commonwealth, nor the current Fear the Walking Dead antagonists, Virginia’s Pioneers, are a big part of AMC’s future plans for their Walking Dead TV universe. That’s why it would have been nice if the series meant to properly spotlight them wasn’t such an unrepentant bore.

Okay, in fairness, things could obviously change in the weeks ahead. Even so, The Walking Dead: World Beyond is so far a sluggish, dull series that definitely isn’t off to a great start. Sure, its showcase of a fully-developed, surprisingly modern academic community, one that looks even less affected by the walker apocalypse than Alexandria over on The Walking Dead, isn’t without promise. Even then though, that world is seemingly laid to waste right from the end of this first episode, stranding the protagonists in the wilderness, and setting them up to start re-treading the same tired storylines that have already been done to death on The Walking Dead and Fear the Walking Dead at this point, or at least, it appears that way. Sure, the lead survivor protagonists being gen-Z upstarts switches things up a bit, but asking the audience to trust TV teens, who are often infamously unlikable and irritating in the modern, adult-oriented era of genre television, isn’t exactly a good selling point. 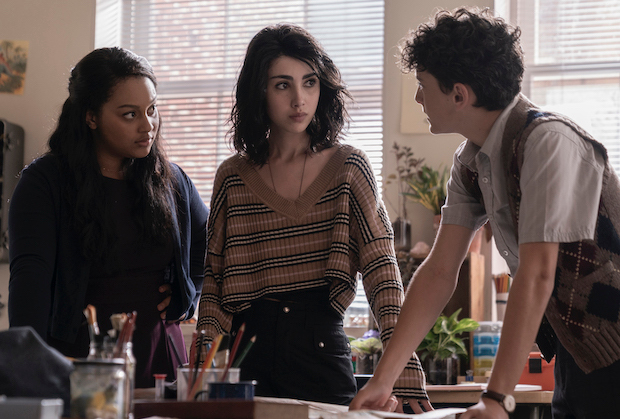 To their credit though, if there is one thing that The Walking Dead: World Beyond does get right out of the gate, it is the charm behind the fairly likable teen leads. Chief among them are Iris and Hope Bennett, two young women who have been left in the care of the Campus Colony, situated in what used to be Nebraska, after their father goes to work for the CRM, or ‘Civic Republic Military’, supposedly to develop a cure for walkers and re-animation upon death. Iris is an overachieving academic who has devoted her entire existence to a better future, while Hope is a troublemaking, directionless rebel that despises her authoritarian overseers. Due to their mother having died during, “The Day the Sky Fell”, or the day the walker apocalypse began ten years ago (thus confirming that The Walking Dead: World Beyond likely takes place around the same time as current events on The Walking Dead), and their father having gone off to a mysterious job in parts unknown, the two Bennett girls are currently looked after by Felix, a stern, but likable security officer at the Campus Colony, who will likely have considerable bearing on the show’s storytelling down the road.

If it seems like this is a big dump of background and exposition, that’s because it truly is. Part of the reason why this first episode for The Walking Dead: World Beyond feels so tedious and slow is because it piles on a ridiculous amount of establishing information, having to race through the setup of the Alliance of the Three, the CRM, the Campus Colony, other important colonies in Portland, Oregon, Omaha, and New York State, and a visiting Lieutenant Colonel of the CRM, Elizabeth, who pays a visit to the Campus Colony, and ends up destroying all of it at the end of this episode… For some reason. This also occurs almost immediately after Elizabeth intentionally sets Iris and Hope, who eventually rope in kindly martial arts enthusiast, Elton, and shy, but strong violent offender, Silas, onto their journey beyond the safety of their community. There’s plenty of backstory surrounding Iris and Hope, more so than Silas and Elton so far, but it’s very drawn-out, and only serves to keep hammering home the characters’ basic personality traits, despite the bloated exposition dump. So far, these characters are likable, but they aren’t necessarily interesting, at least not yet. 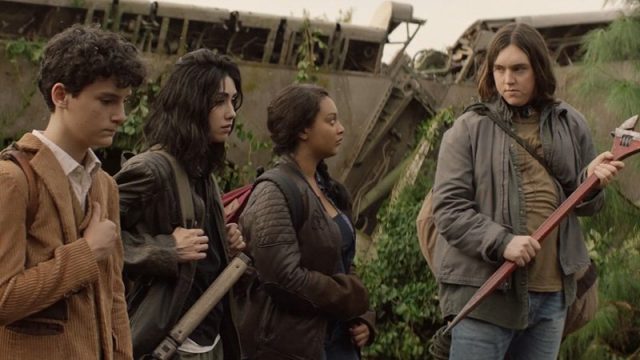 I suppose it’s unsurprising however that The Walking Dead: World Beyond would borrow this slow burn storytelling style from the start of Fear the Walking Dead, which also largely begged audiences to just trust it while it spent at least two seasons meandering around a loose premise that it was only half-determined to truly nail down and flesh out. The Walking Dead: World Beyond can’t waste that much time bumbling around though. It’s very clearly being utilized as an efficient way to lay the groundwork for AMC’s proposed Walking Dead movies, along with potential small screen projects to come in the Walking Dead TV canon. This limited series’ first episode can nonetheless be an exercise in frustration though, especially after it spends its entire duration setting up an admittedly cool Campus Colony, only to have Elizabeth burn it to the ground by the end. That makes a big chunk of this episode’s establishing efforts feel like a waste, even if it’s no doubt also meant as a way to take away the teens’ safety net, after Hope’s and Iris’ father calls for help over a fax machine.

That fateful fax is the inciting incident that sends the teens off to New York State, on foot, from Nebraska. Yeah, I’m not surprised that it’s going to take two whole seasons for this group to get there, even with Felix and his plucky lady friend, Huck also pursuing the teens, while Elizabeth and the CRM presumably monitors the whole lot. There are some other details driving this show’s premise as well, such as Iris having recurring nightmares about being a walker (which have animation filters for some strange reason?), but none of it feels like it truly matters yet. The Walking Dead: World Beyond might have been able to get away with this slow burn, relatively grounded apocalypse conceit in the mid-2010’s, when Fear the Walking Dead managed to skate by on it against the odds, but by 2020, when AMC’s The Walking Dead universe feels especially tired and long in the tooth, it’s just not enough to make The Walking Dead: World Beyond interesting on its own. If AMC was hoping to win a bunch of fresh viewers by relying heavily on its teen protagonists, I don’t think that experiment is going to be too successful at this point.

Sure, if you’re hanging on with AMC’s increasingly tired Walking Dead TV universe to this day, and you’re still hungry for more of it, then The Walking Dead: World Beyond manages to not be terrible in its first episode, even if it also doesn’t manage to be truly compelling, at least not yet. AMC is demanding a lot of faith from viewers that are likely already burned out on the Walking Dead franchise by this point, and likely won’t have the patience to jump into a third series long-term, especially when it’s really not doing much to respect audiences’ time so far. That could be a disaster if The Walking Dead: World Beyond doesn’t improve in the coming weeks, especially now that AMC is finally facing the music, and setting an endpoint for their flagship Walking Dead series in late 2022, with the oft-detested Fear the Walking Dead probably not that far behind it.

I really hope that The Walking Dead: World Beyond doesn’t just turn out to be a grueling, tiresome 20-hour commercial for the Rick Grimes movies in the end. I actually don’t hate the TV teens this time. I just hope they quickly find something better to do than complain about having nothing to complain about.