Fear the Walking Dead feels like a shaky consolation prize, in any case, especially coming off of a widely-disliked fifth season (I didn’t hate it as much as many others did, but even I acknowledge it was quite flawed), which re-framed Morgan’s crew as a bunch of insufferable bleeding hearts, rather than reasonably altruistic survivors. Season Six aims to correct some of these mistakes, especially now that Morgan’s group have all been separated, and shipped off to different settlements under the purview of Fear the Walking Dead’s new lead antagonist, Virginia. Before we can get to that mess however, Season Six’s premiere, “The End is the Beginning”, instead revolves entirely around Morgan, who, surprise, survived his seemingly mortal injuries from the end of the Season Five finale. Apparently, Morgan’s dying message reached someone, because he’s since been patched up, albeit crudely. 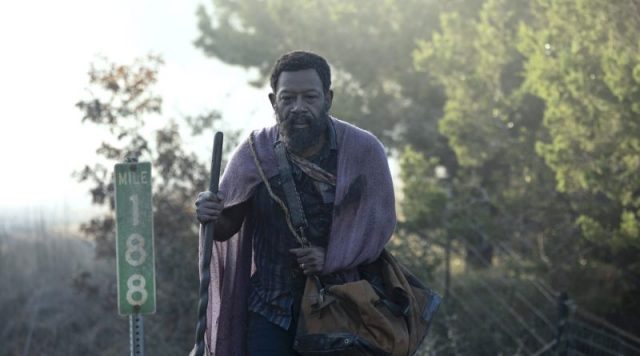 With his current condition giving him terrifying bloodshot eyes, and leaving him immune to the notice of walkers (likely because he smells like death), Morgan has resigned himself to a new mission, namely taking care of a water tower, and preparing it as a shelter for… Someone. Inevitably though, these plans get upset when Virginia starts questioning her dirty work from the end of last season, and enlists an axe-wielding bounty hunter named Emile to positively determine that Morgan has been killed. While that’s going on, Morgan also chances upon another survivor named Isaac, who also read Morgan’s message from the truck stop, and later reveals himself to be one of Virginia’s former rangers. Morgan may have given up on his former mission, but clearly, someone still believes in him, and Isaac is determined to make sure that Morgan avoids Emile’s axe! 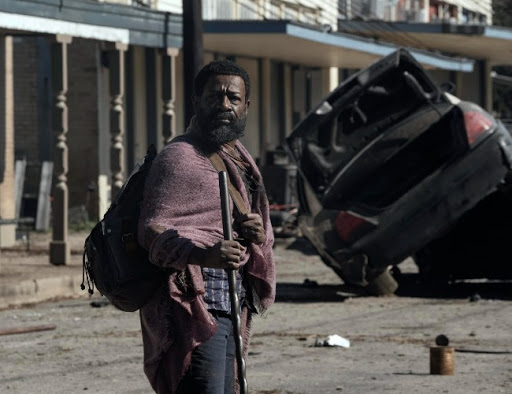 It’s also a bit annoying that Fear the Walking Dead is once again going in circles with Morgan’s character, having to dredge up more tired old drama, as Morgan yet again decides that he can’t go on, and doesn’t want to survive anymore. This has been done to death already in the main Walking Dead series, especially when Morgan’s last crisis of faith there was the whole reason he wandered all the way to Texas to headline Fear the Walking Dead’s ensemble in the first place! Adding insult to injury is that Morgan’s latest mopey turn predictably ends up being moot anyway, since Morgan eventually discovers that Isaac has been bitten, and that Isaac sought out Morgan so that someone could protect his wife, Rachel, who is giving birth to a baby girl. Yeah, somehow Rachel gives birth to that baby without any kind of supervision or medical assistance. Apocalypse gotta apocalypse, I guess.

Still, the actual mission to flee Emile throughout much of this episode can be pretty thrilling, especially when Isaac proves to be a pretty likable character. This makes the twist of Isaac being bitten feel all the more crushing as well, even if Isaac’s death does leave Morgan with yet another renewed sense of hope, though also one that comes with Morgan casting off his staff. Yep, Morgan’s back to his old, angry, murderous ways, triumphantly leaving some corpses in the road with which to taunt Virginia, before he tells her over a walkie that Morgan Jones is dead, and someone else is in his place. Oh, and Morgan also leaves Emile’s head in a box for Virginia to find, because I guess that was a thing Emile did when he was alive. Granted, Morgan once again embracing violence on Fear the Walking Dead is both inevitable and necessary, but it sucks that we had to yet again trudge through a bunch of mopey, trite character storytelling in order to get him back there. 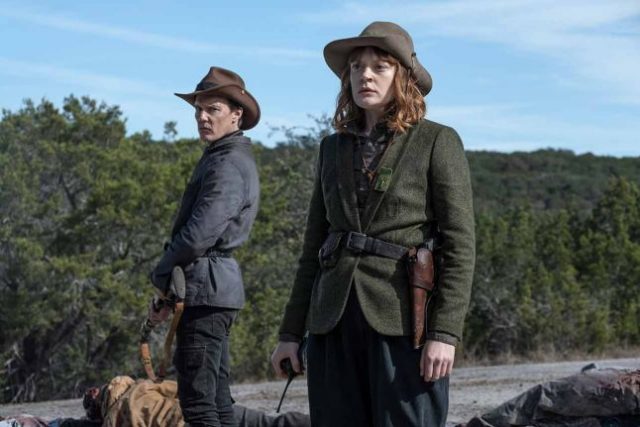 I will say that Fear the Walking Dead at least manages to kick off its sixth season on a reasonably intriguing and thrilling note, even if this spin-off show is yet again molting, and can’t really decide how it wants to separate itself from the main Walking Dead series. Fear the Walking Dead is going just as deep into comic book territory as its flagship inspiration at this point, especially considering Morgan’s thoroughly absurd injury symptoms, and the fact that Morgan, Isaac and Rachel alike (nor the stranger that patched up Morgan off-screen) don’t seem to need doctors for any variety of risky medical procedure. Morgan’s opening story arc for Season Six is kind of a bust to boot, but at least it puts Morgan back on the path of being a more believable survivor, especially when this also means Morgan won’t ultimately try to fight Virginia with one hand tied behind his back. Hopefully the rest of Fear the Walking Dead’s survivors prove just as refined and battle-ready when we no doubt check in with them in the weeks ahead.

Fear the Walking Dead 6.1: "The End is the Beginning" Review
Fear the Walking Dead's sixth season premiere delivers an intriguing, if hackneyed survival story for Morgan this week, as a stranger motivates him to believe in his mission again.
THE GOOD STUFF
THE NOT-SO-GOOD STUFF
2020-10-14
77%Overall Score
Reader Rating: (0 Votes)
0%