Batwoman may have taken Easter Sunday off last week, but the show’s return this week doesn’t change much for the dire state of its current plotline. “Time Off for Good Behavior” continues what I can only imagine is an intentional race to the bottom at this point (it has to be, right?), pushing another asinine core storyline that wants to say something profound about a real-world issue, only to frame it through nothing but alternative facts, while once again stopping at saying, “This thing is bad”, as if the script was written by a twelve-year-old. Fortunately, the show’s villains at least continue to do okay by comparison, with the Snakebite epidemic in Gotham continuing to take a fairly interesting turn, as Jacob finds himself on the receiving end of the False Face Society’s agenda.

Once again though, Batwoman frustratingly pushes a lot of its most interesting developments into its subplots this week, leaving a core storyline that’s yet again mired in infantile, unhelpful social justice rhetoric that continues to make a pitifully ineffective effort to court Gen-Z viewers. This time, it’s the prison-industrial complex that’s put on blast in Batwoman, which, admittedly, is not a terrible idea on paper. Gotham City organically lends itself to prison commentary, considering how infamously choked by criminals it is. Unsurprisingly though, Batwoman squanders a good idea for the umpteenth time, taking an interesting scenario, and dumbing it down to a level that’s not only extremely contrived, but also downright insulting.

The villain-of-the-week in this episode is a prison CEO that’s hiring criminals incarcerated in his prisons to destroy community buildings, the latest of which inexplicably wields an electricity gun, a double missed opportunity, since this character is not Gotham’s resident electricity-themed baddie, Electrocutioner, and nor does he wield the familiar DEG weapons that are currently a focus on Black Lightning. This criminal, unsurprisingly, torches the community centre that Ryan, Mary and Jordan (yeah, she’s back this week, unfortunately) wanted to help build, leaving the operation in ruins. Um, how? Does Batwoman not understand the concept of insurance? Okay, sure, putting aside the fact that this community centre appears to have been built by The Flash, considering how unrealistically quickly it went up, it’s true that community centres can often be largely funded through public donations, but they also receive grants from the state government in many instances, the very same state government that also pays for public prisons in the U.S. Batwoman however claims that the city pays for prisons, which is not how the prison-industrial complex works, especially when the writing fails to take into account that private prisons and public prisons are two separate things, yet this episode treats them like they’re the same thing!

Put simply, the villain’s plot doesn’t ultimately make any sense. It’s not truly reflective of the real world, completely deflating Batwoman’s supposed social commentary on American prisons that wasn’t that deep or profound to begin with! This storyline is both under-thought and overthought at the same time, creating this needlessly complex conspiracy with electricity guns and embezzlement, all so the series can force a turn where Angelique is kidnapped by the False Face Society. Yeah, Batwoman already got bored with Angelique being in prison apparently, so Sophie expedites a move to protective custody for her, after Angelique identifies the police commissioner shooters for the Crows (who were killed by Black Mask anyway), thus rendering Angelique’s entire prison sentence completely pointless. Seriously, what the hell is going on with Batwoman’s writing? Why is it so exceptionally terrible this season?! 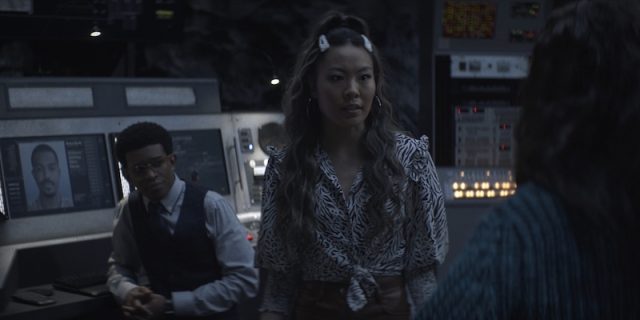 At least Black Mask and Enigma are still doing alright as this season’s big bads though. Both villains saw some sinister new turns this week, particularly Enigma, as she begins to influence events with Julia and Jacob. After Julia fails to recall the details of her investigation into Kate’s death, for example, Enigma, going under the civilian identity of Dr. Evelyn Rhyme, gets called in to Crows HQ for a separate interview with Jacob, only to be intercepted by Julia. After Julia then tries to corner Enigma however, she gets jabbed up with some mystery drugs, before her memory is presumably altered again, and she transfers to Germany. Yeah, this is a pretty transparent excuse to get rid of Julia for the foreseeable future, but I guess the show has gone as far as it can go regarding the investigation into Kate’s supposed death.

Black Mask, meanwhile, continues to serve as an easy highlight this week, despite the fact that he’s ultimately not in this episode very much. The one legitimately good idea that Batwoman presented this week did occur from Jacob’s perspective though, after he’s knocked out in his car, and forcibly injected with Snakebite by one of Black Mask’s goons. This presents some interesting new insight into the dangerous drug, which apparently allows its users to relive painful memories, and see different outcomes from them. Jacob, predictably, becomes addicted to Snakebite as a result, not only putting him in the villains’ pocket, but also trapping him in his failure to save Beth before she became Alice. Alice herself is sadly given the shaft this week, by comparison, proposing an investigation with Julia, a plot that ends up going nowhere, before she decides she wants to forget her family altogether. Three guesses as to who she’s going to see to make that happen.

It definitely would have been good if Batwoman wasn’t so insufferably predictable this week as well. Some of Enigma’s potential is squandered here for sure, since the show immediately points out when Enigma has manipulated events, and how she’s done it, rather than effectively leaving things open to interpretation. Batwoman, are you really that terrified of your viewers actually using their brains and thinking for themselves? That seems to be the case, because, “Time Off for Good Behavior” is once again loaded with ineffectual social justice rhetoric, rushed, convenient plot turns, and more frustrating, forced conflicts. The show even dredged up Mary re-opening her clinic here, and whining to Jacob about it, despite the fact that Jacob offered to pay for a legitimate clinic, staffed with real doctors, and carrying real credentials. Why would Mary pitch a fit about that?! Not only does she come off as extremely unlikable and spoiled here, an unwelcome throwback to her much more reprehensible character writing in Season 1, but she’s unnecessarily endangering herself, her friends and her family by refusing to vet her patients, especially in Gotham City! What is she not understanding about that concept?!

So, that clinic closure plot is yet another storyline that Batwoman now seems to be bored with, and that really sucks, because that was a legitimately great story turn! There just doesn’t seem to be any hope left for the show anymore. Its tone is hopelessly confused, its writing is a bewildering mess at the best of times, and its social justice themes range from laughably shallow to infuriatingly infantile. With its ratings in the toilet to boot, reports are mounting that The CW plans to cancel Batwoman after its upcoming third season as well. I don’t normally root for that, but in this case, it may be for the best. Batwoman just can’t seem to escape its troubles, and Ryan Wilder would be put to much better use as a guest superhero in other Arrowverse shows at this rate.

Batwoman 2.10: "Time Off for Good Behavior" Review
Batwoman returns with its latest lacklustre episode this week, presenting a non-sensical commentary on the prison-industrial complex, and once again leaving the villains to impotently try and salvage the plotting.
THE GOOD STUFF
THE NOT-SO-GOOD STUFF
2021-04-11
56%Overall Score
Reader Rating: (0 Votes)
0%