Fear the Walking Dead is finally back, and with its return comes the chance to finally see the show’s originally planned midseason finale, which was delayed into 2021 due to production complications caused by the ongoing COVID-19 pandemic. “The Door” is an episode that packs a hell of a punch as well, even if most of its pacing can be rather dogged. The over-arching message behind this episode’s surprisingly cold conclusion does nicely set up a very dark turn for the remainder of the season though, as the anthology-style focus of Season 6’s front half (the latest apparent effort by AMC to start conditioning audiences for its in-development Tales of the Walking Dead series) returns the lead perspective to fan-favourite character, John Dorie.

After branching off from his friends and Lawton, John has found himself back at his old cabin. It seems that John has reached the end of his rope as well, contemplating suicide several times, only to be distracted by several walkers. Eventually, John’s sheer annoyance leads to him discovering a barricade on the nearby bridge as well, the source of displaced walkers falling in the river. It’s here that John reunites with Dakota, as well as Morgan, both of whom were apparently separated from Alicia and Charlie off-screen. Alicia and Charlie do make it to Morgan’s budding community, on that note, but they’re not really the focus here, only getting a bit of screentime to establish their safety towards the end of this episode.

Instead, Morgan and Dakota spend most of this episode trying to talk John into joining their community. John’s despair is an ominous new turn for his character, that much is true, but if I’m being honest, most of this story direction does get pretty tedious before long. AMC’s Walking Dead TV universe has done the whole ‘detached survivor that won’t kill and goes into isolation’ storyline to death by this point, especially with characters like Carol over on the flagship series. Hell, it seems like even this episode’s own script is aware of how overdone this story turn is, since John’s refusal to kill is abandoned just a few scenes later, after he saves Morgan from one of Virginia’s rangers.

Things start to pick up a lot more amid John’s, Morgan’s and Dakota’s circular arguing once John agrees to help Morgan and Dakota cross the walker-filled bridge. This is definitely the best part of this episode, as Dakota must try and drive a repurposed truck from John’s late father through a whole horde of walkers, while Morgan and John desperately try to keep them at bay. All the while, Virginia continues to close in, while Morgan gives her the runaround. It’s a wonderfully intense, unpredictable scenario, and one that’s pretty impeccably shot to boot. All three survivors do manage to make it through this obstacle in the end, but it definitely seems like John in particular has more than a few close scrapes!

This is where the big emotional hit occurs though, and boy are fans of this series going to struggle with it! After John discovers that Dakota is carrying the broken knife that was used to kill Ranger Cameron back during John’s other episode in this season’s front half, John confronts Dakota about why she has the knife, leading to Dakota confessing that she did indeed kill Cameron. The motive was simply revenge, on account of Cameron taking away Dakota’s one secret route in and out of Lawton. This is actually superb, since it illustrates that Dakota has the same psychotic streak as her sister, one that’s motivated her to exploit John’s and Morgan’s help alike in order to flee Virginia’s territory. This in particular presents a ton of promise for the rest of this season, especially while Dakota continues to function as essentially a bargaining chip for Morgan and Virginia to battle over at this point. 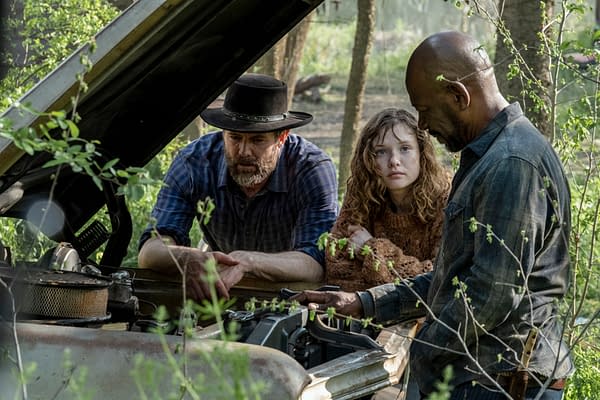 In fact, Dakota claims that she’s the one that patched up Morgan, following his near-death experience at the end of the Season 5 finale, and left the note that Morgan still has things he needs to do. In a strange way, Dakota thus ends up being the inspiration for Morgan’s new community, despite the fact that she was effectively using Morgan as a blunt instrument against Virginia, and nothing more. This immediately taints Morgan’s idyllic vision, but that’s nothing compared to the ill fate that befalls John! After John tries to convince Dakota that she can be his reason to carry on, Dakota shockingly shoots him in the chest, claiming that not everything needs to have a meaning. This is a huge shock, considering that John is one of the most beloved characters on this show, but John does nonetheless cling to life, swimming up from the river, the same river that saved Madison back at the end of Season 3 (the writing also remarks on this river’s tendency to save seemingly doomed characters), and trying desperately to hang on, effectively giving viewers hope that John may in fact pull through.

This is where the show really outdoes itself in terms of its extra dark new direction. In the end, Dakota’s nihilistic claim that not everything has to mean something turns out to prevail through the shocking events with John. June, who was pulled out of Lawton by Virginia, does eventually find John floating downriver, clinging to a piece of driftwood… But it’s too late. June is horrified to see that John ultimately bled out, and has now re-animated as a walker. Thus, this episode ends with an emotionally devastated June having to put a knife through John’s temple, as Fear the Walking Dead makes the very controversial decision to kill off one of its most beloved heroes. This is a big deal, one that was originally meant to serve as the midseason finale cliffhanger before COVID-19 hit, but the grim, heart-wrenching twist of John’s death still works plenty well as a midseason premiere flourish, despite the fact that many fans will probably be furious about it.

As a declaration of intent though, killing off John definitively proves that Fear the Walking Dead isn’t playing around when it comes to Season 6’s back half. “The Door” actively attacks the premise of hope that Morgan has built his renewed desire to live upon, as well as his new community, and that wonderfully sets the stakes for what’s sure to be a very emotionally challenging series of episodes. This episode’s storytelling does drag a bit at times, plus John’s latest tantrum ahead of his untimely demise retreads too much tired Walking Dead survivor melodrama, but even if this isn’t the most universally sublime start to Fear the Walking Dead’s 2021 run, it’s nonetheless a very memorable and powerful one. The loss of John, and Dakota’s psychotic true colours, are bound to carry a massive ripple effect across both the heroes and the villains of this series, particularly for Morgan and Virginia, because for both of them, things just got personal.