Pennyworth may have taken its sweet time getting to better, more rewarding plot developments for its leads, but with Project Stormcloud continuing to loom over London, and Alfred having finally resolved his conflict with Gully Troy, the show can start devoting its full attention to building up Season 2’s grand climax. The previous episode finally had Pennyworth excelling again to boot, and that positive momentum continued with this week’s newest episode (at least for us in Canada), delivering another standout offering that promises a very exciting, shock-filled climax for the show’s sophomore season.

“Paradise Lost” presents another inspired heist hook, once Alfred is inevitably visited by Thomas, Martha and Lucius, who beg for his help on a job. That job involves stealing Project Stormcloud from Raven Union headquarters, a virtual suicide mission, albeit one that could potentially save London’s population from certain doom. Mary is naturally very disinclined to have Alfred participate, but Alfred nonetheless agrees to help, despite his recent stabbing injury at the hands of Gully. That injury does at least put the fear of God in Alfred though, spurring him to visit and make peace with Sandra, possibly believing that he could die on his next assignment. That’s sweet and all, but man, poor Sandra is really being jerked around by Alfred throughout this season. Is this poor woman’s torment ever going to go anywhere of note, beyond a physical manifestation of Alfred’s conscience?

Regardless, the next morning sees Alfred and Dave Boy join up with a heist undertaken by Thomas and Lucius, while Martha instead goes off to talk to Aziz. It’s a little disappointing that Martha doesn’t ultimately come along on the heist, but even so, this absence is very nicely balanced out by the Sykes sisters infiltrating Raven HQ at the same time, tricking their way in by taking Vikki hostage, and claiming they’re all courtesans of Salt. Something that’s darkly amusing about this is the fact that Bet and Peggy have an even more successful heist than Alfred’s crew does, successfully liberating Mrs. Gaunt from prison, while Alfred and co. are inevitably caught by Salt’s men.

This provides ample opportunity for Pennyworth to deliver on its big cliffhanger from the previous episode, which revealed that Alfred’s father, Arthur survived his failed bombing attempt on The Queen, and now lives within Raven HQ, hooked up to a crude life support machine. Salt has Arthur meet with his captured son, which results in a very tense confrontation, albeit one that seems to soften Arthur a bit. Alfred appealing to Arthur’s love for Mary feels smart, and it reasonably casts some doubt over Arthur’s convictions toward unleashing Project Stormcloud on London. This eventually comes back into play later, when Salt appears as if he’s definitely going to execute Alfred’s party.

Fortunately, Alfred and co. do get a brief assist from Bet and Peggy, after they just so happen to pass through with Mrs. Gaunt. There’s even a brief sort of catch-up period between Alfred and Bet, which is somewhat played for laughs, but it does call attention to the fact that separating these characters all season has been a little disappointing. Bet has nonetheless continued to develop wonderfully as a character this season, but I hope that, should Pennyworth be renewed for a third season, she gets more of a chance to tear it up with Alfred again. Something tells me that the Sykes sisters will be occupied with Mrs. Gaunt for a little while though, after they successfully spring her from prison, only for Alfred’s crew to get captured a second time, despite Bet’s efforts to help them escape. I have to admit, that’s another surprisingly effective bit of dark humour!

Things certainly look grim by this point, particularly with Martha failing to convince Aziz to fight on as well, as the English League prepares for unconditional surrender. The Queen is sent off to France, Aziz reckons with his eventual fate, and Alfred’s group prepares for death… Until Arthur whispers to Alfred that he has a machine gun in his pocket. Salt is unfortunately somewhere else when Alfred finally shoots his way out of Raven HQ, complete with Project Stormcloud on his person, but the heroes do nonetheless get away here, signaling Aziz to that effect. They also break Arthur out of Raven HQ to boot, which would seem like an especially big victory… But the final shot hanging on Arthur does present reason for concern. Has Arthur truly defected? If you ask me, this is another of Salt’s mind games. In an additional bit of irony, Salt is once again putting Arthur in the position of giving his life for the supposed good of England, by likely unleashing Stormcloud after he reunites with Mary! After all, Arthur has drank pretty much all of the Raven kool-aid, so I can’t believe that his supposed love for his family is enough to make him instantly turn his back on Salt’s cause. 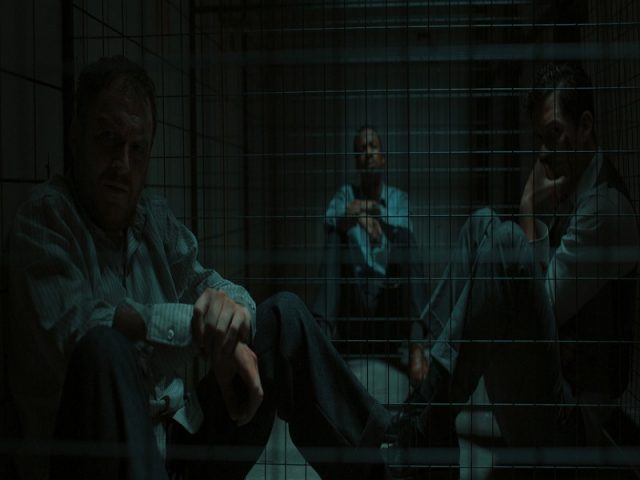 No matter what ultimately happens during the climactic struggle for London though, Pennyworth continues to ride high on its latest narrative direction, largely because it’s finally successfully bringing together the many disparate plot elements of Season 2. “Paradise Lost” not only delivers an entertaining, funny and rewarding heist effort at Raven HQ, but it also exceptionally brings Alfred back into the emotionally challenging orbit of his father. Arthur even appearing to defect also presents some standout promise for next week’s season finale, especially when Arthur’s defection could very well be a trick by Salt, one that could spell doom for England’s last free city. One thing’s for sure; The end of Pennyworth’s sophomore season is bound to be an exciting one, as the various factions close in around Stormcloud, seemingly the first step in a reign of twisted science that will no doubt spill into Gotham City one day, and we all know what kind of monsters that fallout will breed in the future!

Pennyworth 2.9: "Paradise Lost" Review
Pennyworth continues to excel off of the race for Project Stormcloud this week, as well as an intense reunion between Alfred and his father.
THE GOOD STUFF
THE NOT-SO-GOOD STUFF
2021-04-12
90%Overall Score
Reader Rating: (0 Votes)
0%