After a bit of a messy episode last week, Invincible thankfully gets back on track with its fifth episode this week. “That Actually Hurt” does a much better job of balancing its several story arcs, delivering Mark’s latest painful lesson as a fledgling superhero, while the new Guardians of the Globe run into their own complications as a team. Debbie meanwhile encounters her own complications this week to boot, after the notebook left by the expelled Damien Darkblood leads to her discovering the terrible truth about her husband. This all adds up to producing another of Invincible’s best episodes yet, especially now that the series once again seems to be finding its footing when it comes to its humour and satire.

The conflict of Mark struggling with balancing both sides of his identity also remains in effect this week, as Amber continues to express confusion and impatience with Mark’s repeated tardiness. Amber is obviously unaware that Mark is Invincible, but Eve nonetheless tries to run interference, impressing upon Amber that Mark legitimately cares about her. This appears to tease something of a loose love triangle between these three characters, while effectively setting up Eve as a well-meaning support system for both Mark and Amber alike. This dynamic is impeccably cemented after Eve fights with her parents over dumping Rex and refusing membership in the new Guardians of the Globe team as well, leading to Eve taking Mark’s place volunteering with Amber at a soup kitchen. 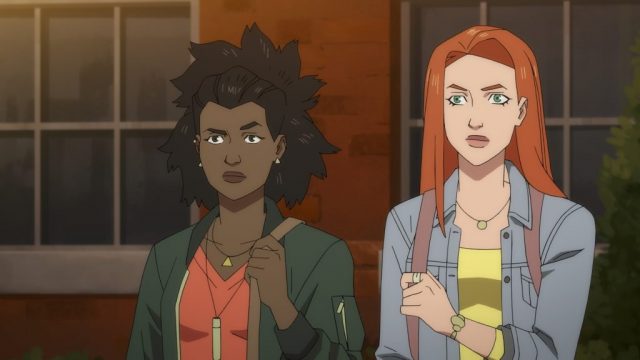 As much as Mark’s woes with Amber retread an old conflict from last week, they do take another interesting turn here, as Mark becomes further spread thin between his duties as a high schooler, his duties as Amber’s boyfriend, and his duties as a superhero. This episode’s added complications come primarily via Titan, the super-powered criminal that Mark encountered during this show’s very first episode. Titan, as it turns out, is an unwilling enforcer for a local crime boss called Machine Head, who essentially functions as the Wilson Fisk/Kingpin of the Invincible universe. After calling Invincible to his side, Titan thus proposes that the two team up to take on Machine Head, which leads to Mark deliberating that prospect with his parents. Nolan is very much against the idea of teaming up with Titan, believing that you can never trust a supposed super-villain, but Debbie disagrees, saying that Mark should never feel that helping someone is beneath him.

The parallel that’s drawn between Mark’s family and Titan’s family is another of the best storylines in this episode, especially considering that Debbie now seemingly knows Nolan is responsible for murdering the former Guardians of the Globe, thanks to finding Nolan’s ripped, bloodied old Omni-Man costume. Just as the Grayson’s are threatened with a major rift over Nolan’s actions, Titan similarly struggles to break the news that he couldn’t ultimately escape the thumb of Machine Head, despite Machine Head’s promise that Titan could leave his services after just a few more jobs. The irony here is that Omni-Man, the superhero, is the one hiding an evil secret from his loved ones, while Titan, the criminal, wants to do good for his family at the very least, but keeps being forced on a path of darkness. It’s a very interesting method to create a very worthwhile team-up, one that eventually leads to what’s easily the most shocking and exciting episode climax that Invincible has delivered to date! 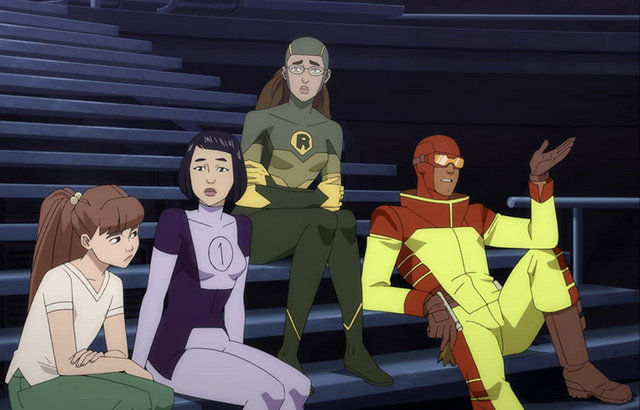 This climax also doubles as the first serious challenge for the new Guardians of the Globe, who otherwise serve as the one Achilles’ Heel in this standout episode. The Guardians struggle to come together as a team, which is touched on after a lecture by Black Samson, following some sort of botched off-screen mission. Meanwhile, Robot visits the Mauler Twins for some sort of job, which we don’t get a payoff to yet. This is meant to serve as further setup for this episode’s climax, but it feels like the Guardians of the Globe miraculously coming together to aid Mark and Titan is missing a few key scenes. The show ultimately doesn’t do anything that meaningful with the Guardians’ struggles to work as a unit, instead leaving them to come together almost flawlessly when Mark needs them most.

Of course, even then, this is mostly all for naught. After Titan leads Mark to take on Machine Head, they both end up cornered by an entire squad of super-villains, led by an especially powerful alien gladiator called Battle Beast, who is more or less the Steppenwolf of the Invincible universe. In any case, an epic battle ensues against the diverse group of villains, which also includes Magmaniac, a sentient lava man, Furnace, a literal walking furnace, Kursk, an electricity-wielding villain, and Tether Tyrant, a Doctor Octopus-like character that controls several tether tentacles protruding from a chest harness. This leads to a very creative, action-packed scrap with a wide variety of foes, leading to the best flexing of Invincible’s animation yet! One of the super-villains from this sequence in the source comics, Magnattack, sadly didn’t make it into the TV series here, but the sequence nonetheless remains one of Invincible’s best to date, especially when the Guardians fo the Globe finally join the fray!

Nonetheless, this battle ends in tragedy for several of the heroes. While most of the villains are ultimately driven off, Battle Beast brutalizes Monster Girl and Black Samson, and also leaves Mark within an inch of his life, before retreating out of boredom, necessitating a medevac from the GDA! This naturally leaves Mark’s family and Eve incredibly concerned, though the real danger could be yet to come. In a truly superb final twist, Titan ends up taking over Machine Head’s vast criminal enterprise, bringing his family with him, and taking his place at the top of the heap, thus ultimately proving Nolan correct about Titan’s ulterior motive that Mark failed to spot. A Machine head successor isn’t the only problem being created for the Grayson family either, as this episode ends with the GDA declaring that they took a sample of Mark’s blood to try and learn how to kill Viltrumite cells, so far having failed to kill the cells. This would appear to suggest that the GDA knows that Omni-Man is a danger to the world, but they’re currently helpless to stand against him, or Mark for that matter!

Invincible ends on a higher note than ever this week, perfectly concluding an already superb episode. “That Actually Hurt” does an excellent job building up to its exciting, but ultimately chilling conclusion, stretching the show’s animation to new heights in the process. Meanwhile, the series’ perverse sense of humour feels a lot more balanced and refined in this case, especially regarding how the strange poetic justice behind Titan’s ascent to power, and Nolan’s failed warning that accompanied it, came to pass. I doubt Mark appreciates the irony though, considering that he’s now on death’s door, thanks to his hubris against Machine Head and Battle Beast. The new Guardians of the Globe could be down up to two members to boot, possibly forcing Eve onto the team, despite her wishes to avoid working with Rex. I wish that the show had found more room to flesh out the discord throughout the new Guardians of the Globe here, like I said, but Invincible nonetheless hits audiences with a hell of a haymaker this week, giving us plenty to chew on while the GDA finds itself simultaneously trying to preserve and destroy the legacy of Earth’s Viltrumite superheroes.

Invincible 1.5: "That Actually Hurt" Review
Invincible regains its footing with its best episode to date this week, as Mark's meddling in villain affairs leads to deadly consequences, while Eve strikes up a surprising friendship with Amber.
THE GOOD STUFF
THE NOT-SO-GOOD STUFF
2021-04-11
90%Overall Score
Reader Rating: (0 Votes)
0%