Hands up if you’ve ever heard of SkyDrift before. If so, you likely caught and enjoyed a solid but unspectacular aerial racing game on Xbox 360 or PS3. However, it’s likely that you didn’t raise your hand at all, because the game didn’t receive a whole lot of buzz.

I still remember being sent a review code back in 2011, and being worried that I wouldn’t get something up in time because I had two weddings to go to, including one two-and-a-half hours away. However, it ended up being a short experience, and something that I enjoyed. That obviously made it easier to both play and review.

It’s hard to believe, but almost ten years to the date have passed since SkyDrift originally released. Yes, it’s been that long. Now, two console generations ahead of where we were then, the action-packed aerial racer has returned for a second lap under a slightly different name.

An upgraded and enhanced version of the original title, SkyDrift Infinity is not the sequel that you may have been hoping for. No, this is very much the same game with some improvements and additional touches. The content department remains mostly status quo, but things look better, run more smoothly and appears faster. Still, even with these upgrades, SkyDrift Infinity still feels like the souped up Xbox 360 game that it is. At least it’s always been a pretty good one.

The first thing I need to mention is that this isn’t an Xbox Series X|S or PS5 title. No, it’s actually been released onto last-gen consoles, including Xbox One, PlayStation 4 and Nintendo Switch, along with PC. Thus, it’s not one of next-gen’s first combat racers.

Those who purchase this revamp will find a fun and competent game, albeit one that is somewhat stuck in the past.

When it comes to the core gameplay loop, little has changed since 2011. You’re still tasked with racing your way through approximately seven different sets of increasingly difficult events, with the goal of placing in the top three in at least most of them. There are a few different event types, too, including:

Power Racers: These are Mario Kart-esque events where the goal is to use as many power-ups as possible to get onto the podium. Blowing opponents up is the easiest way to achieve victory, although they do respawn, and are pretty good at using weapons of their own.

Speed Races: Eschewing power-ups for speed bursts, these fast-paced sprints task you with coming in first with quickness and deft flying alone. Flying through one of the many orange circles will increase your speed to an almost dizzying amount.

Survivor: As you’ve likely already guessed, the goal here is to be the last plane standing. Every so often the clock will tick down until the last placed racer is eliminated.

The aforementioned power-ups are pretty standard, but I’ll list them for you nonetheless. To start there are homing rockets, standard machine gun fire and mines that can be placed wherever you wish. Then, there are things like electrical shocks, shields and the ability to repair your plane’s damage. Where this differs from Mario Kart and becomes more like Diddy Kong Racing is in the ability to stack power-ups. By picking up a second rocket icon, you’ll get extra homing rockets. The same is true for increased gunfire, better mines and the like. Hell, you can even drop three rotating mines at one time. 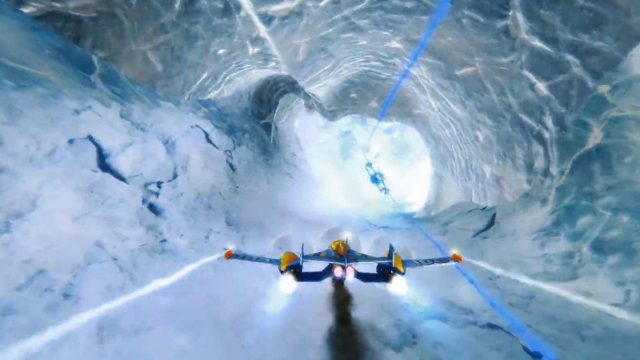 The difference here is that, while I believe Diddy Kong Racing allowed you to stack three levels of power-ups, SkyDrift Infinity only allows for two. The nice thing is that this game also lets you hold two different types at once, so that you won’t have to waste your rockets if you need to equip a shield or repair some damage. On top of that, unnecessary pickups can be liquidated into added speed burst.

Speaking of speed bursts, it’s important to note that there exists a nitrous-style boost system within this racer. You’ll earn more for doing things like flying close to opponents or traveling near to the ground. It can come in handy, especially since this isn’t a very easy game.

For the most part the controls are solid and responsive, although different planes have different abilities. Some are faster than others, while some are able to take more damage, boost better or that type of thing. The trick is to pick the one that suits your play style most, because even though you’ve just unlocked a new plane, it isn’t necessarily going to help you perform better. Sometimes too much speed is an issue, too, because SkyDrift‘s six occasionally reversed courses have lots of obstacles to deal with, including pillars, tight caverns and more.

Using a new plane can really throw your timing off, so be wary.

This re-release once again offers local and online multiplayer, although you’ll likely struggle to find others to play with. We were provided with two codes, so it was easy for me to ask a colleague to play one-on-one with me. Finding a quick match was a whole different story, because it seemed like we were the only ones online. When we checked the leaderboards it showed that less than 1000 people had played the campaign on Xbox, and that only 200+ had actually played online, or something like that. I can’t speak for the other platforms, though.

Needless to say, one-on-one wasn’t the most exciting way to play this game. That was doubly true when it came to the bonus modes: Deathmatch and Team Deathmatch. As such, we only played those for a couple of minutes. They weren’t that great anyhow, because it was harder to control the planes in 3D space.

Speaking of online, I should also mention a couple of other bugs that we experienced.

For starters, SkyDrift Infinity appears as Default Title when someone on your friends list is playing it. Furthermore, inviting friends into a game is a bit of a pain. For whatever reason we kept getting an error that told us we needed the Xbox Series X|S version of the game, despite one not being available. Party invites worked just fine, though.

At the end of the day, I enjoyed my time spent revisiting the frenetic action of SkyDrift, and beat it a second time. This is a pretty fun, Mario Kart in the skies type of racer, but it’s nothing super special. The visual and performance upgrades are certainly beneficial, because the game mostly plays like butter and looks better doing so, but its textures are still reminiscent of the Xbox 360 era. It doesn’t help that little has changed otherwise, meaning that the short campaign remains practically untouched; nor is the lack of online players a good omen. It’s a shame, to be honest.

SkyDrift Infinity Review
SkyDrift Infinity looks and plays better than before, but those are the only notable changes to what is an almost ten year-old game. There's fun to be had, but a lack of content and a tiny online community hurt this thing, as does its dated feel.
Visuals67%
Audio64%
Gameplay75%
Storyline0%
The Good Stuff
The Not-So-Good Stuff
2021-08-09
70%Overall Score
Reader Rating: (0 Votes)
0%