The best thing about my two favourite hobbies — gaming and reading — is that independent creators always push the envelope of both mediums. Although this wasn’t always the case with gaming, it’s been the basis of the literary world since day one. Even then, a lot of limited run, lesser known and self-published books tend to get lost in the maelstrom.

Over the last couple of console generations, indie games have become almost as important to gaming as triple-A releases. Hell, many prefer them to what the big boys publish on an annual basis. After all, there’s a lot more creativity in such titles than one will find in each year’s iteration of Madden, Battlefield, Call of Duty or whatnot. Not that I’m trying to shit on those series, because I’ve had a lot of fun with each one over the years. It’s simply the truth.

This summer, developer Acid Nerve and publisher Devolver Digital brought something new to the table. They call it Death’s Door, and it’s one hell of a great experience. Put simply, it’s one of the better indie games we’ve played in some time, and one of the better games in general.

Death’s Door doesn’t begin with a lengthy tutorial, or really ramp its difficulty up from easy to more challenging variations, like most games do. Instead, it drops you — a crow carrying a weapon — into the world of reapers, where you’re tasked with reaping one particular soul. It’s your first assignment, and not an easy one.

Of course, as is always the case in stories like this, the proverbial shit hits the fan and said soul escapes captivity. What follows is a not-very-nice chastising, and an adventure that involves exploring a large, semi-open world and underworld. Along the way you’ll use weapons like a sword, a bow and arrow, magic and/or an umbrella to destroy enemies and steal their soul currency. Of course, your main goal isn’t to just dispatch regular enemies, who always come back to life after you leave the area; it’s to find and best specific creatures. One particular being happens to be an evil witch/granny who simply loves pottery.

Featuring a top-down perspective that is reminiscent of early Zelda, Death’s Door is a challenging game that feels similar to some of today’s challenging roguelikes, but is (thankfully) not one. When you die you’ll respawn at your last point of entrance to the underworld, and can resume your adventure from there with nothing lost. The titular doors come into play here, because they’re the way one can fast travel between certain points of the map and the quiet, crumbling and bureaucratic offices of the reapers. You’ll want to do this because visiting one’s boss allows one to purchase health, combat and movement upgrades, provided one has enough soul currency.

As expected, adventuring also offers the benefit of advanced abilities and new powers, all of which you’ll earn and learn as you play through this game. Returning to previously visited areas with new abilities will then allow you to find secrets and earn upgrades that were previously inaccessible and unavailable.

In a lot of ways, Death’s Door reminded me of The Legend of Zelda: A Link to the Past. The traversal, puzzles and combat are both somewhat similar, as are the ways one enters battle with both bosses and mini-bosses. However, unlike that seminal classic, this title allows players more freedom of movement. What I’m referring to is the ability to roll away from danger, using a dash type of mechanic. That’s the easiest way to avoid damage in a game that limits one’s health and can be pretty challenging and unforgiving. You can’t exactly carry potions with you, so you’ll need to be careful to avoid being hit.

In fact, this title’s health system revolves around the use of seeds and occasional pots. The idea is that you’ll pick up seeds along the way, and will get to choose where and when to plant them. When you plant a seed, it instantly creates a flower that can be used to heal oneself. However, that flower wilts until you either die or come back later. It’s also possible to run out of seeds, which I discovered early on, when I was too generous with my gardening.

Don’t get me wrong, though: Death’s Door isn’t an incredibly difficult, Dark Souls-esque experience. Although its usage of somber tons and stylized visuals makes it look dark and menacing, there’s a good amount of light and humour to the game. It’s also challenging but fair, meaning that those who hate overly difficult games (like myself) needn’t worry. 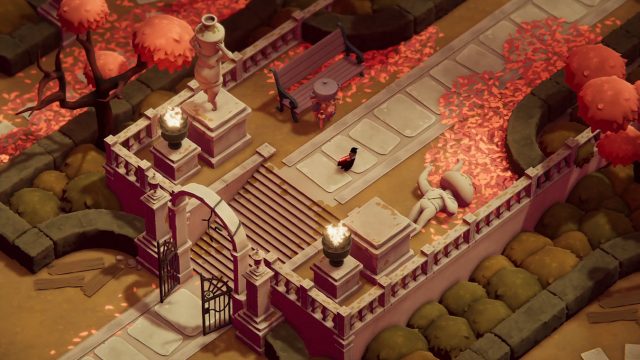 Clocking in at around eight hours in length, this is also a pretty lengthy adventure; especially given the fact that it’s only about $20. As such, you’ll get a lot of bang for your buck here, especially if you’re someone who likes to replay games, or someone who goes back to find all secrets. The world of Death’s Door is pretty large, and there are lots of secret areas to discover.

Needless to say, Death’s Door is an absolute must play regardless of which device you get it for. It’s a great and fresh hack n’ slash title, despite also feeling like a familiar friend from yesteryear. Don’t sleep on this one!