Although it’s been decades since they first debuted in comics and then cartoons, the Teenage Mutant Ninja Turtles remain an iconic and ever present part of our popular culture. They’ve been the focus of rebooted cartoons and movies, video games and more thanks to Nickelodeon, and it doesn’t seem like they’re going to fade any time soon. In fact, they’re just about to return to the stage, as the focus of a brand new brawler from DotEmu. One they call Teenage Mutant Ninja Turtles: Shredder’s Revenge.

Decades ago, the original Teenage Mutant Ninja Turtles cartoon, and the early 90s live action movies, were a huge part of my childhood. The same was true of the action figures, of which I had many. On top of all of that, one of my earliest gaming memories involves playing the NES games on my cousins’ consoles. That underwater level with the electric coral is forever seared into my memory, and those who tried to beat it will know why.

Teenage Mutant Ninja Turtles: Turtles in Time was the only Turtles game I ever owned — at least until it was redone for Xbox Live Arcade — and I played the crap out of it on my well used Super Nintendo. Friends, family and I fell in love with it immediately, and it still stands as one of the best games I’ve ever played. When I heard about this one, my hope was that it would be similar, and that it would end up being close to as good as that masterpiece, and those hopes thankfully came true. 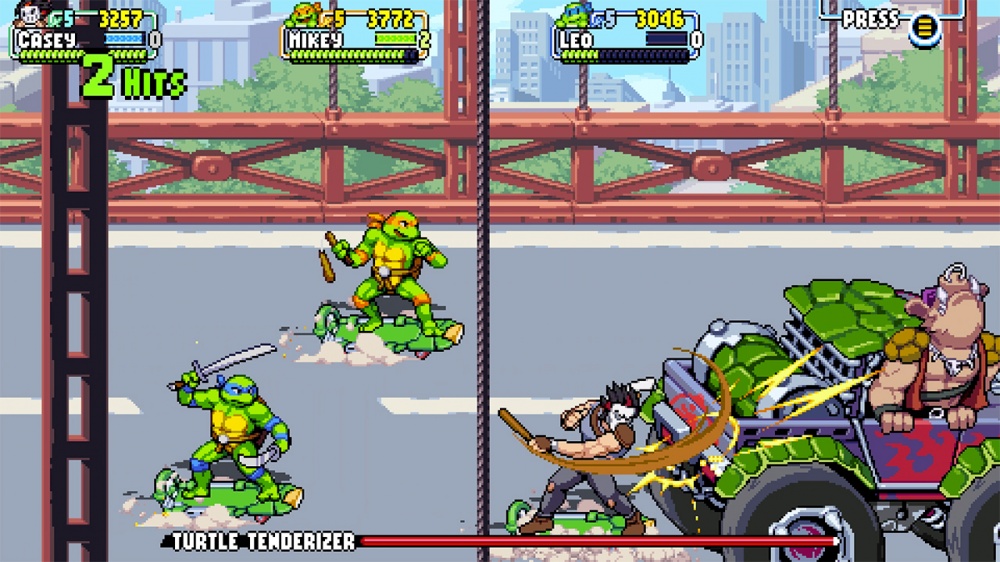 TMNT: Shredder’s Revenge may be a 2022 release, but it’s rooted in the late 80s and early 90s. It’s very much a homage to the years where the side-scrolling platformer and beat ‘em-up were kings. If you grew up during that era, it will be chock full of nostalgia for you as it was for me.

Simply put, this is a game that could’ve released a year or two after Turtles in Time did. If it wasn’t for its included online multiplayer, trophies and achievement support and high-def visuals, that would be believable. It’s retro, but not just in the way it looks. The end result is a great and nearly flawless 90s side-scrolling beat ‘em-up.

As was always the case, the story is just an excuse to pit the Heroes in a Half-Shell and some of their friends up against tons of foot soldiers, mousers and  familiar bosses. However, it is important to discuss nonetheless.

Things pick up as Leonardo, Raphael, Michaelangelo and Donatello sit down to watch the news with April and Master Splinter. Everything seems normal, but it all changes quickly. The news is hijacked by BeBop, the newscaster is kidnapped and part of Krang’s robot is stolen. After that, the broadcast switches to a view of the Statue of Liberty, which is quickly surrounded by strange Foot aircraft, before being threatened on live TV.

The pizza loving, humanoid, Turtles quickly jump into action and head to Channel 6’s headquarters in New York City. This acts as the first of sixteen different stages, all of which should take you between 7 and 11 minutes to complete. In total, this is a 2-2.5 hour long game.

There’s an impressive amount of variety to be found in Teenage Mutant Ninja Turtles: Shredder’s Revenge, and that comes through its numerous stages. As you progress through New York via a branching world map, you’ll battle various types of enemies in locations like a TV studio, a zoo, a subway station, a city block, the Technodrome and the air above the city. While most levels feature similar beat ‘em-up mechanics, which are based around light, heavy, aerial and special attacks, some let you soar on hoverboards. This is similar to at least one iconic stage from Turtles in Time.

The game adjusts itself based on how many people are playing, as well as the difficulty, thus determining how many enemies appear. There were quite a few to tackle when I beat the campaign on normal, and did so alone, so I can only imagine what it’s like with six players. I couldn’t find anyone else online, though, both when I started and after I’d finished. Granted, I played through this thing a few days before release, and also did so prior to its day one patch. 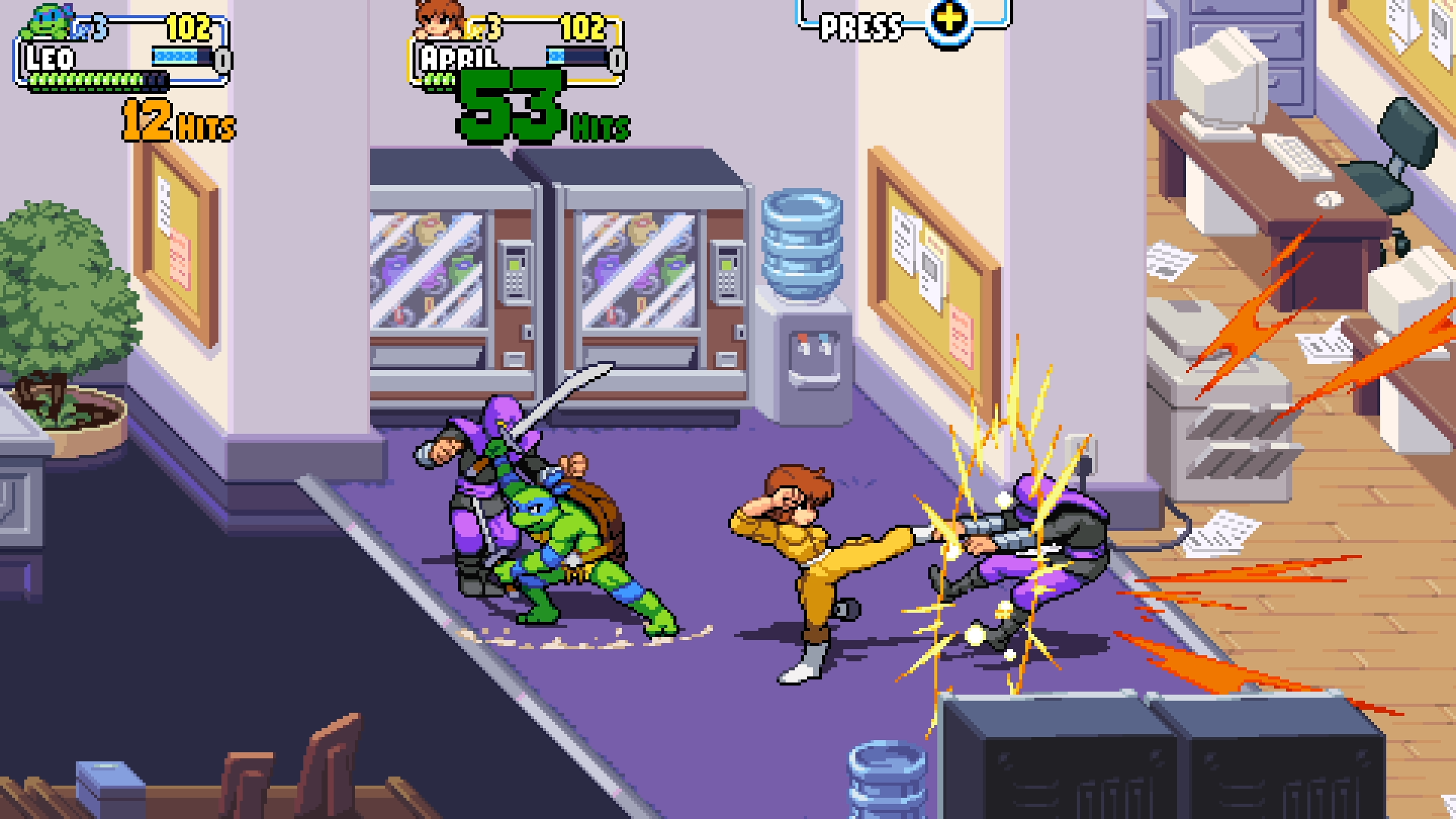 If you do choose to play online, or via couch co-op, the game will scale as I mentioned previously. Players can party up or jump in and out, and can choose from several different characters, including all four Turtles, Master Splinter, April and (unlockable) Casey Jones.

As you play, you’ll level up your chosen character, all of whom have their own stats pertaining to things like speed and power. I chose Leonardo because he was the most balanced, then tried Casey and April after finishing the game. Leo was once my favourite Turtle, but that distinction changed like the weather. There were times where each of them were my favourite as a child, and I particularly loved both Raphael and Michaelangelo.

Each character has his or her own weapon and animations, and their special moves correlate to them. That said, they remain pretty similar. For instance, if you fill the Turtle Power gauge once and press triangle, you’ll perform a wide spin attack. If you jump and press triangle, your special move will be a super powerful jump kick that kills any enemy it touches in one hit. Meanwhile, if you save up three Turtle Power meters, you’ll unleash a special status effect that adds otherworldly shadows to your character. I couldn’t tell if it increased my damage dealt, or what else it did.

Combat is based around melee combos, heavy (held button) attacks, jump kicks, grabs/throws and special moves. However, there are also environmental items to hit and send flying towards enemies, including water hydrant caps, traffic cones and their own projectiles. Players can also work together, and team up against enemies, or pick up one of three types of pizzas. The first refills your health, the second gives you unlimited Turtle Power for about ten seconds, and the third unleashes a special spin attack for a brief period of time. 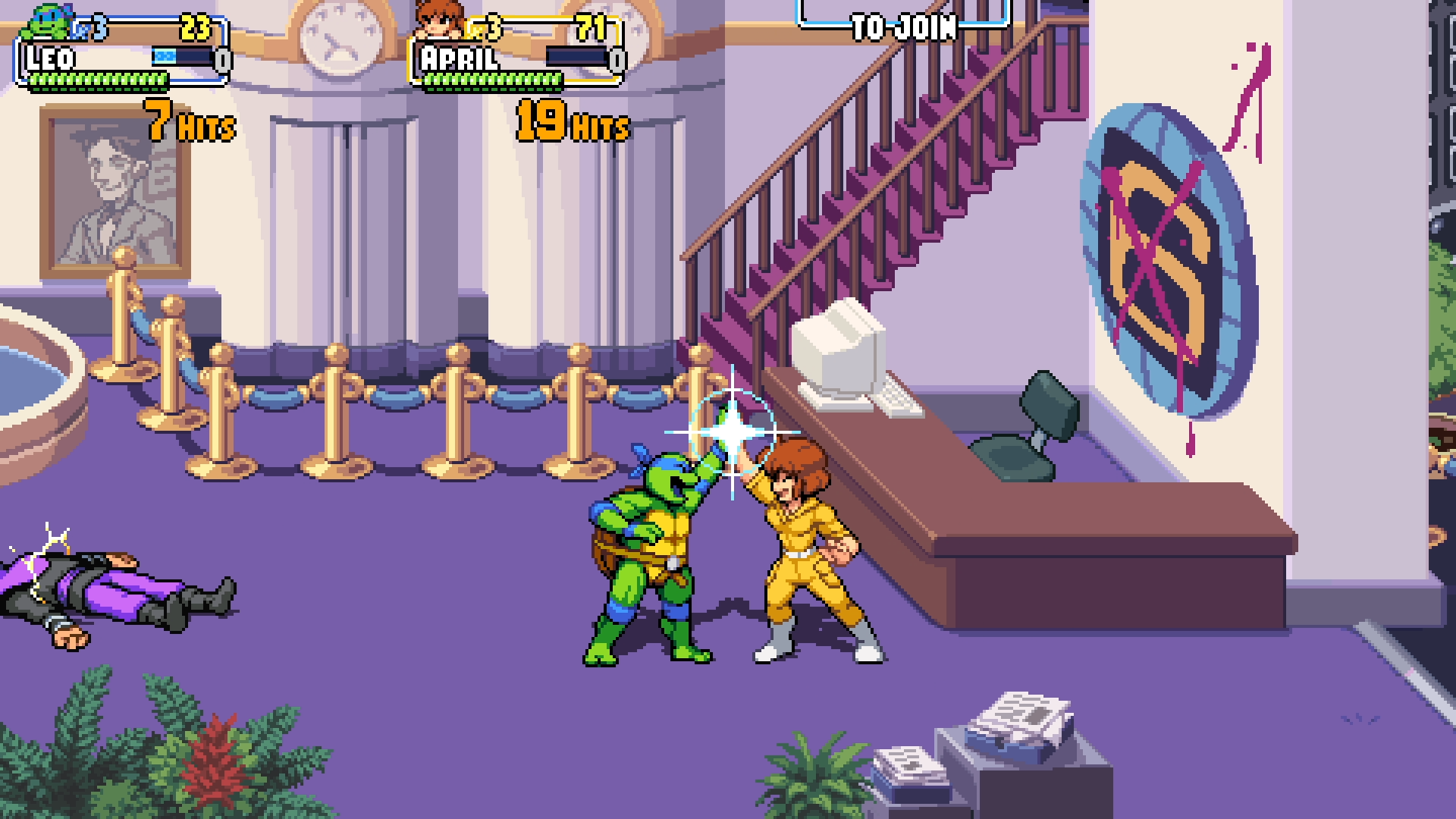 Levelling up through combat will earn you different perks. For instance, levelling up the first time gave me an extra HP point, whereas levelling up again unlocked a different ability (like the shadow status). I also earned a couple of additional lives upon levelling up, which was helpful. While Shredder’s Revenge wasn’t too difficult on normal, I did get a game over screen during its 13th stage. Thankfully, though, getting a game over did not require starting from the beginning. That’s reserved for Arcade mode, which features limited lives and no saved progress. The base mode gives you at least three lives per stage.

You can also earn upgrade points by completing challenges or finding collectibles, as each level has at least a couple of each. The challenges usually include things like beating a stage without using a special move or getting through without being hit by obstacles. Meanwhile, hidden characters (who are found by opening doors or breaking environmental objects) will task you with finding things for them. Things like VHS tapes, crystals, newspaper headlines and diary pages.

As someone who grew up loving the Teenage Mutant Ninja Turtles, their cartoon and movies, and their (NES, SNES and arcade) games, I was really excited when DotEmu announced this project. I waited months to get my hands on it, looking forward to doing so the whole time, and now that I have I’m impressed. Teenage Mutant Ninja Turtles: Shredder’s Revenge isn’t just an homage to a simpler and happier time; it’s a great game in its own right. One that could’ve easily been a sequel to Turtles in Time back in maybe 1995. It looks, plays and controls so damned well. 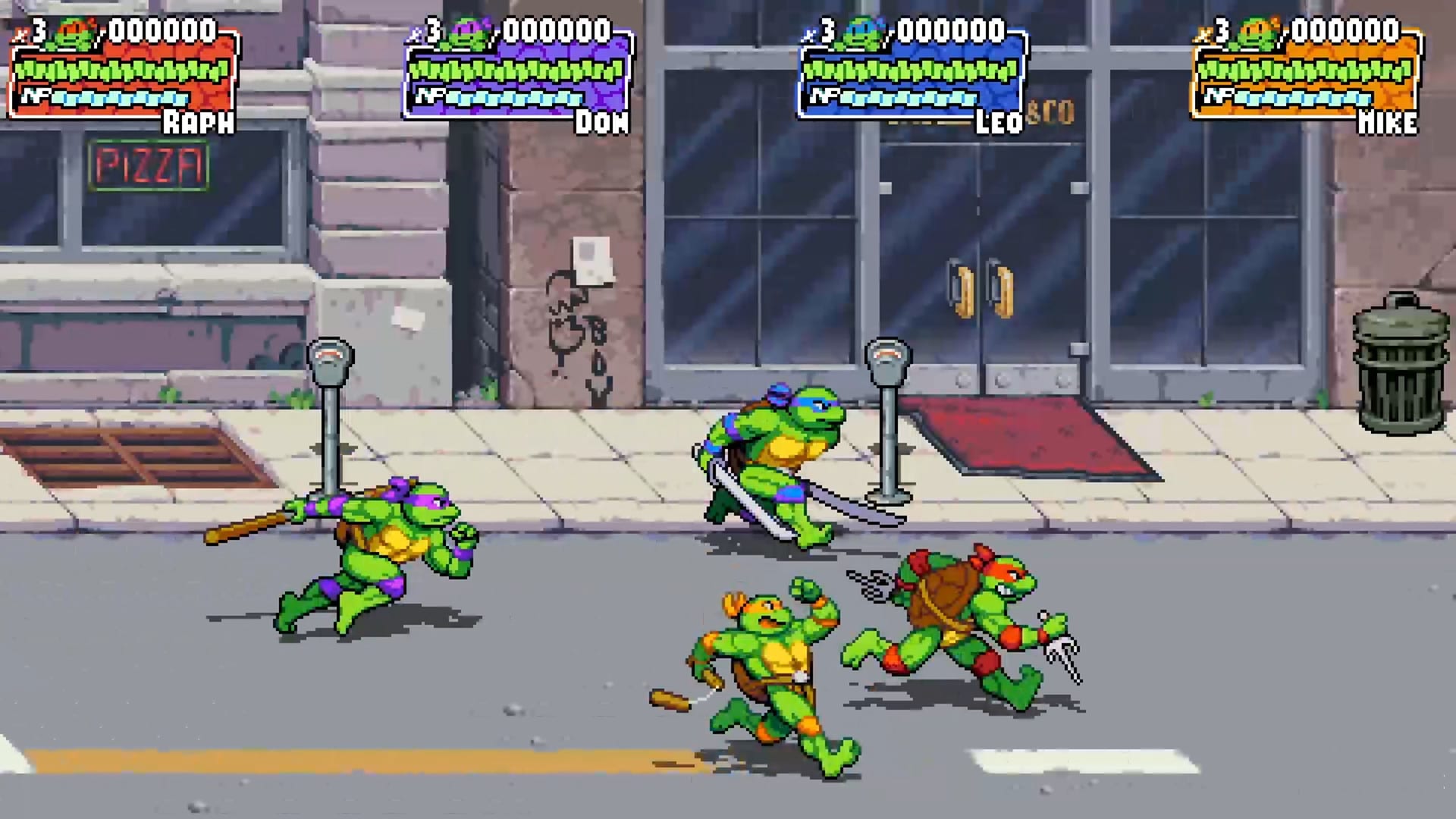 On the presentation side of things, you can expect beautifully retro 16-bit visuals with fantastic animations. That, as well as both retro-inspired music and brand new music from popular artists, which players over a few different parts of the game. There isn’t much in the way of dialogue or voice acting, but that’s to be expected. That said, I did really appreciate hearing the characters take turns introducing each stage, like they did in Turtles in Time. It was a really nice touch.

I was provided with a code for the PlayStation 4 version of Shredder’s Revenge, but I played it on PS5. Not only did it look and sound great, but I also never experienced an issue, outside of one second of (potentially imagined) slowdown during a hectic fight. This is a very polished title.

If you’re a fan of the Heroes in a Half-Shell, grew up with their classic video games or simply like beat ‘em-ups, you cannot go wrong with Teenage Mutant Ninja Turtles: Shredder’s Revenge. It’s great!

This review is based on the PlayStation 4 version of the game, which we were provided with. It was played on a PS5.