When the first Disney Epic Mickey game was announced, people were in tears over the concept. A game starring one of the world’s most iconic characters with his own storyline and re-introduction into the world was a massive undertaking and made a lot of people happy.

For some reason, Disney Epic Mickey 2: The Power of Two hasn’t had the same effect. The game has been getting mediocre and poor reviews, and we just don’t understand why. There are a few flaws, sure, but The Power of Two is probably one of the most smile-inducing games on the planet.

From the beginning, we’re treated to a classically-styled Disney cartoon recap of the first game. It’s a short introduction that does what it needs to perfectly: remind you of the incredible experience you had with the first game and get you pumped for the next.

When we get into the game itself, we can somehow feel that there’s a new adventure about to unfold. Of course, that is the case, so it makes sense, but it’s not the same feeling we get at the beginning of every game. This feeling is one of familiarity and uncertainty all wrapped into one candy-coated game. Free to do anything and free to go anywhere. Disney Epic Mickey 2 is clearly a game created with love, and so much love, it’s ludicrous. In the best way possible, of course.

Now, Disney being a company known for its animation as well as its affiliation with Pixar, we expected more in the graphical department of the game. As far as visuals go, they look okay, but given that we’re in the last few years of the current console generation’s life cycle, we think it’s fair to have games look a bit better than early-generation Xbox 360 titles. And honestly speaking, that’s being generous.

We do like the fact that the art style of the cinematics seem to weave in and out of time periods past. Cartoon effects change in a very subtle way as the game progresses, and each cutscene seems to harken back to a different era in cartoon animation.

There’s a certain art style to Disney Epic Mickey, and we don’t think the game should go hyper-realistic or anything, but little annoyances such as jagged edges and massive slowdowns in framerate on the Wii U version we tested are just not acceptable when push comes to shove. Poor graphics will never ruin truly excellent storytelling, but it doesn’t do it any favours, either.

Thankfully, the storytelling that Warren Spector and his team have managed to compose is that truly excellent variety we mentioned. A lot of people complain about The Power of Two being a bit too simplistic, but that is the hallmark of a quality Disney title. The overarching storyline is supposed to be very simple, but with characters who can’t be trusted and others who are too timid or ridiculous to rely on, the story in the game gets properly weaved as you play through. There’s an overarching theme with the Mad Doctor being given a second chance by Oswald, your returning pal from the first game. This forgiving nature is seen in his character as Oswald himself was once a forgotten toon, as were most non-playable characters in the game. It explains his compassion and could be his downfall, but we won’t get into any spoilers here. 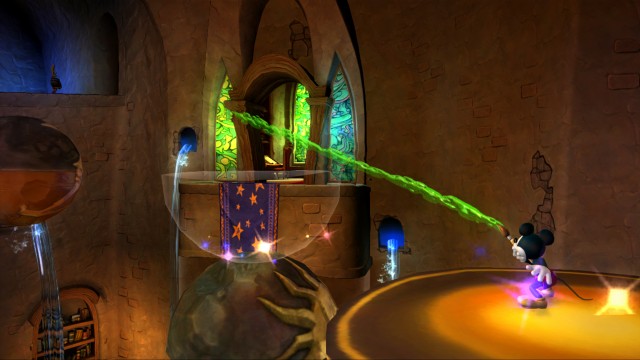 The Power of Two really gets into heart and storyline development when it mixes audio production with the narrative threads it weaves. Any great Disney movie has a memorable song (or twelve), and Disney Epic Mickey 2 doesn’t disappoint. The game actually opens with a musical number which, as we learned when we spoke to Warren Spector a few weeks ago, would play a big role in the game. He was right and musical numbers have actually become some of the best reasons to get this game. They’re not as memorable as something we might have heard in Aladdin or Beauty and the Beast, but let’s not forget that that’s probably because many of the characters here are not as famous as Jasmine or Belle.

Warren also mentioned that Disney Epic Mickey 2 would not be the finale in the story (assuming Disney green lights a third game), and in order to tell the full story he has planned, he’ll need at least another game.

Much as the experience in a Disney movie is the biggest factor in enjoyment as opposed to any one component of the film, gameplay mechanics are probably a game’s equivalent. Within the first few minutes of playing, you’re seduced with the theme of choice that plays out over the rest of the game. Some choices are simple and redundant, such as how to move your character through a level, while others will change the game more drastically, such as deciding to use thinner instead of paint, or vice-versa.

The paint and thinner mechanic returns in Disney Epic Mickey 2 and while it’s mostly the same, there is nothing wrong with that. Paint and thinner are still unique enough to make the game ridiculously fun. For the first time in a platformer of this style, you get the real chance to change the world around you, destroying and erecting buildings with a single button click.

Playing with Oswald is a great addition to the game as he adds a few new mechanics such as using his ears as helicopter blades to help Mickey get to otherwise inaccessible areas. Of course, having a friend to play along as Oswald makes the experience that much more enjoyable, too. 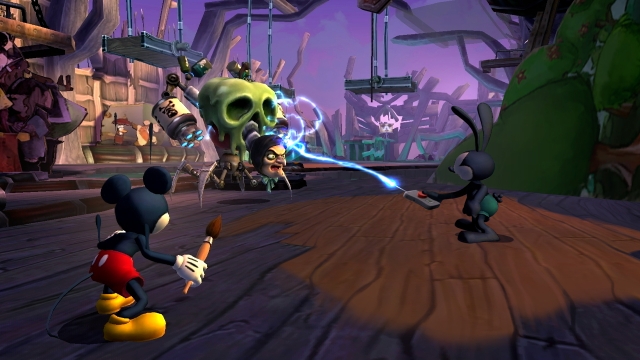 Since we tested the Wii U version of the game, we got the opportunity to play with the GamePad as well as the Wii Remote. In many ways, the GamePad is the best way to play the game, and in perhaps more ways, the worst. The scene on the GamePad itself is very useful in that you always have an interactive map to use when you’re trying to orient yourself in the sometimes confusing levels.

However, using the right analog stick to control paint and thinner is very cumbersome. We’re not sure there’s anything the developers could really do to change this, however, and we can’t fault them entirely for that fact. We imagine the Xbox 360 and PlayStation controllers all suffer from the same fate, and it appears as if PlayStation 3 owners who also happen to have a Move controller around the house will fare best with Disney Epic Mickey 2. The Wii version of the game also controls very simply, although we didn’t test it personally.

Our biggest gripe about the controls, especially in the age of multiple controller schemes, is that, when playing on Wii U, you have to use the GamePad to control Mickey, and can only add a Wii Remote when a friend joins you for co-op as Oswald. With the Wii version that (obviously) only supports Wii Remote controls alongside a nunchuk, we can’t understand why the same controls aren’t offered for Wii U owners. The GamePad functionality is great, but the fact that the analog controls lessen the experience for us outdoes the fact that we get a fancy little map on screen.

Normally, we wouldn’t care about controls as much as we do here, but controlling your aim is the biggest gameplay mechanic in the game next to running and jumping. Not having it perfect is a real letdown, especially when they’re better on a console one generation older. 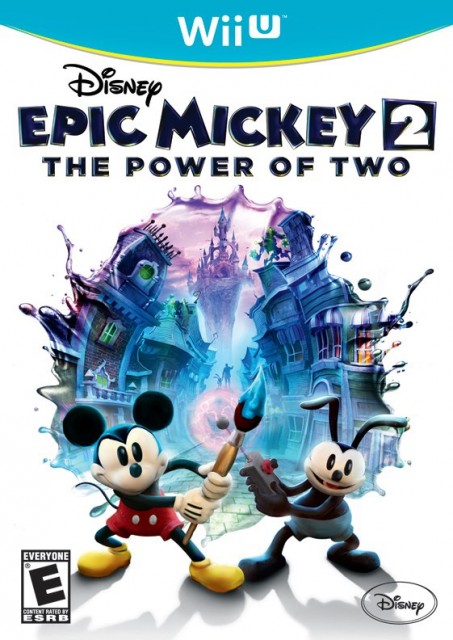 With all our gripes and concerns, it’s still impossible to not like this game. There are framerate issues all over the place on Wii U, but loading times are a snappy, pleasant surprise. It’s upsetting not to see more cameos from characters in other Disney universes (and a Death Star in the background somewhere would have been hilarious, although impossible due to the timing), but this game revolves around Mickey for a reason: he’s enough of a character to hold up the game on his own, and with supporting cast like Oswald, Ortensia, and the Mad Doctor in the mix, there are plenty of intricate relationships to manage.

We have to admit that the charm of Disney Epic Mickey 2: The Power of Two won out above everything else in the game. We have our gripes, sure, but at its core, The Power of Two is a charming, ludicrously fun game. Playing as Mickey seems like it would get boring, but the combination of other characters and variety in gameplay make the title worth playing.

Of course, the fact that the game was made with a veritable ton of love is why we’re so fond of it. You can tell that The Power of Two is filled with heart from its many artists and engineers. That passion embodies what we do here at Eggplante, too, and it’s why we have so much respect for games that, even though quite imperfect, are perfect to that someone who created it. Disney Epic Mickey 2: The Power of Two is one of those games.