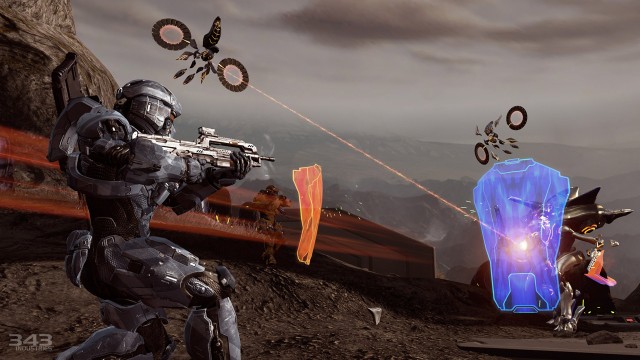 We gave Halo 4 a glowing review because of the quality game 343 Industries managed to put together. Probably our biggest annoyance with the game was its brevity, and knowing that Halo games tend to follow an eight to ten hour journey, Halo 4 felt rather abbreviated at just under six.

The reason for the shorter campaign is undoubtedly that 343 had spent resources in other departments, crafting other stories, and generating more unique styles of gameplay and interaction with characters. Whether or not that’s a good thing is a different story altogether, but the fact is that if 343 had cut out a few things, Halo 4 could have been a 10-12 hour game.

Spartan Ops, the ten-week episodic campaign of Halo 4 is an incredibly diverse experience. It is also something brand new, unlike anything we’ve really seen before in a first-person shooter. Sure, we’ve seen downloadable content, but nothing that recurs every week with five – albeit short – missions. And certainly nothing that’s free.

But Spartan Ops also means that a lot of attention was taken away from Halo 4‘s campaign development. We can’t help but wonder what would have come of Master Chief if the entire Reclaimer Trilogy played out in Halo 4 essentially, while Halo 5 and Halo 6 further expanded the universe. It’s a paradox, really: if Halo 4 was all of 4, 5 and 6, then 5 and 6 wouldn’t be 5 and 6 because 4 would be the whole Reclaimer Trilogy, which would end up being a single game, which would mean 5 and 6 were always after whatever came to be known as Halo 4. If that makes any sense.

Expansions to the Forge level-building system were also quite extensive. 343 Industries saw fit to add all-new magnet and lighting systems to improve the efficiency of building levels as well as their beauty once built, respectively.

It’s very easy to list every feature in a game and say if these were all cut, the single-player experience would be this much longer. With a longer campaign, there’s no telling if 343 Industries would have the time to tell a more epic story or if it would be more of the same Halo 4 but with a prolonged storyline.

Of course, 343 took risks with Halo 4 and while most panned out, some didn’t (for us, anyway), like Spartan Ops. But as much as we would have loved having a longer campaign, that is not what this is about. We wouldn’t change the inclusion of Spartan Ops because doing so would be telling a game developer not to innovate, not to try new things, and to stay safe with the older ideas. And that is very dangerous territory.

For another perspective, take a look at how we think Spartan Ops is a great way for developers to increase the value of their games.