In the world of Halo 4, the campaign is woefully short. We were able to complete the game in about five to six hours. In what the Halo 4 campaign lacks, the Spartan Ops missions more than make up for. Spartan Ops was introduced in Halo 4, replacing Firefight mode from Halo 3: ODST and Halo: Reach. It allows for up to four players to cooperatively navigate a series of missions and objectives, fighting both Covenant and Promethean forces. What makes Spartan Ops a vast improvement over the former Firefight mode is that Spartan Ops is intertwined with the Halo 4 campaign and provides a far greater variety of missions.

Spartan Ops offers a rare insight into the life of the UNSC apart from Master Chief. You play as a Spartan IV in Fireteam Crimson six months after the events of Halo 4. Called to the Forerunner planet Requiem, you explore the mysteries of the shield world, fighting all forces that get in your way. Early episodes felt rather stale, in that the missions were very systematic. Kill enemies here, press a button, more enemies appear, kill them, press another button, and then leave. At the start, it seemed like this was all Spartan Ops would offer players, but as later episodes were released, Spartan Ops began to take shape as it’s own in depth story, with varying missions, and unique objectives.

What brings players back to Spartan Ops (aside from the weekly experience bonuses) is the continuous updates, and the continuing story arc. The story never gets stale because it’s constantly evolving, and playing out. It’s very much what keeps people reading a comic series or a book series, it’s the progression of story that draws you in, and the new challenges ahead to defeat with your friends or on your own. You wouldn’t see as much pull as you do now if 343 made players pay for each chapters worth of content on top of their gold membership, and we think that this is something that they should avoid. It’s a simple idea that has a lot of potential. 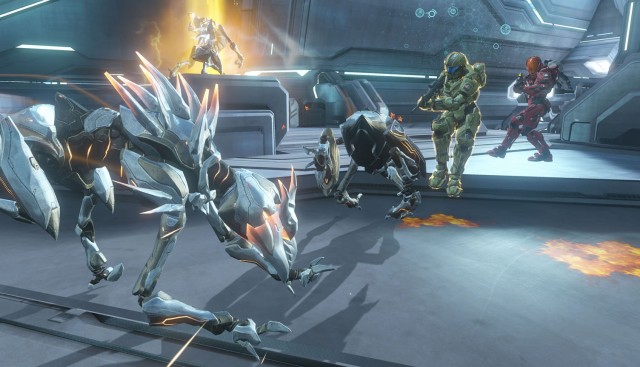 Mass Effect 3 had something similar to Spartan Ops. ME3 had multiplayer content similar to Firefight, where you work as a team to defeat antagonists from the game. Every so often you’d receive updates that there were missions that had to be done on certain planets against specific adversaries, because of some backstory. Sounds generic; however, it provided a sense of an actual war with the Reapers because you were fighting on specific fronts to gain intelligence, supplies, etc. In the end, completing these missions tied into the overall war with the Reapers in the campaign, and had in game bonuses attached to it (sadly non gold members got jipped in this deal). Spartan Ops improves upon this by making its own narrative in the Halo universe, and turning cooperative multiplayer, into mission based stories.

Obviously there are some things that Spartan Ops lacks that the Halo 4 campaign has: cutscenes and Master Chief. Cutscenes would be a nice addition, adding a cinematic element to the mix (we’re ignoring the movies outside the gameplay), but the addition of Master Chief isn’t necessary; in fact, if Steve Downes, voice of the Chief, gets his wish, John­ 117 will get a Hero’s Death by the end of the Reclaimer Trilogy. It’s unlikely that Downes’ wish will be accepted by Microsoft, however, a game based on the Spartan Program without the Master Chief would definitely be an experience that gamers would be drawn to.

What would a Spartan Ops, Master Chief-less game be like? You’d have the opportunity to branch out from the grind of being purely an first-person shooter. Possibilities of new storylines, adventures, and possibly even crafting and creating your own Spartan Fireteam within the campaign may all become real. One thing shouldn’t change, whether or not Spartan Ops gets it’s own franchise, and that’s the continuous updating of content. Episodic launches can only serve to keep content fresh and exciting, so long as they are free and not attached as paid downloadable content. The foundation for a new way of storytelling in the vast Halo universe and in the genre has been paved, and Microsoft and 343 Industries have a chance at innovation, lest they fall into the rift that Nintendo has with the Mario franchise; one million games played for nostalgia only, and stars, because, as a wise man said, it must always be stars.

For another perspective, take a look at how we think Halo 4 could have been 12 hours long.