The bottom of the battery cover also has the game’s logo and slogan, “A Survivor is Born,” printed on it.

There are also bandages wrapped around the handles and finger and palm prints on the controller in areas where you’d be holding the controller and jabbing buttons, and if it has been done properly, we’d guess that the A and X buttons are going to be used most.

The analog sticks seem to do away with the small rubber nubs on them, in favour of a smoother surface.

Picking up the controller also gets you a download code for a playable character exclusive to Xbox 360, the Scavenger Archer.

The controller will launch on March 5th alongside the game in two colours. 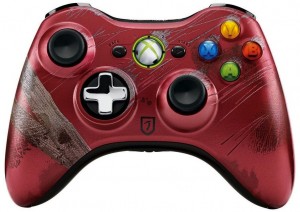