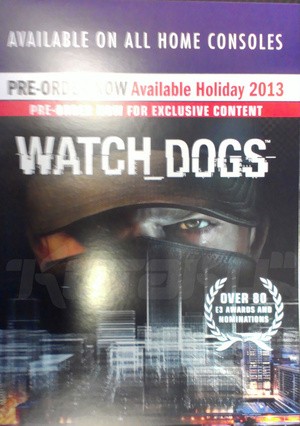 According to a pretty convincing leak of some marketing materials over at Kotaku, Ubisoft’s smash hit from E3 2012, Watch Dogs, will be arriving this holiday for “all home consoles”.

Of course, the game was widely regarded as a huge sleeper hit and quickly became the talk of the show, despite it having no floor presence or being at any of the manufacturer’s press conferences. The game does look nothing short of jaw dropping and looked good enough to already be running on next generation consoles, but there’s no guarantee that’s what’s happening here.

The materials, which depict a generic-looking gunman and a face overlooking a cityscape, says that those who pre-order will also get exclusive content, though what that is specifically is not listed on the card. There is also no retailer listed on the card which likely rules out Best Buy as they tend to put their own header on the top.

It’s interesting that we’ve seen two pre-order material leaks so close together, though there is no indication that this leak has come from a retailer or within Ubisoft itself. If it came from a retailer, there’s no reason to have it unless they’re going to be needing them in the next few days, so we’d expect to see Watch Dogs at Sony’s event next week. If they came from Ubisoft itself, this really only points to the fact that the game is still under development, which we pretty well knew anyway.

There is also the header on top of the card that declares that the game will be available on all home consoles, though whether or not that includes next-generation hardware or not obviously remains to be seen. There are a few reasons to think that it does, most notably that the game looks so good that it probably doesn’t need much of a bump to look incredible on Sony and Microsoft’s next console.

That phrase on top of the card also means that the game is going to be available on Wii U since Nintendo’s console is certainly capable of anything that can be thrown at the PlayStation 3 or Xbox 360.

Ubisoft has only confirmed that the game is under development for Sony and Microsoft’s current-gen consoles, but we expect to hear more in the near future. 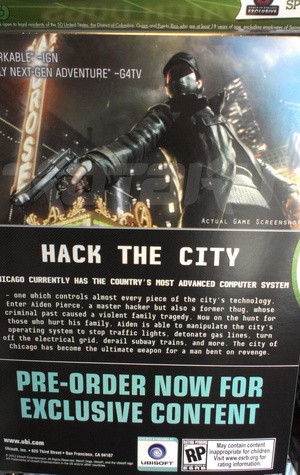