It is our great pleasure to hear that Metro: Last Light is launching for Xbox 360, PlayStation 3, and PC on May 14th.

The game has taken on a new publisher, Deep Silver, as THQ closed business and sold off its assets. The Koch Media-owned company secured the intellectual property rights to Metro as well as Saints Row, Dead Island, and development studio Volition.

Koch Media CEO Klemens Kundratitz said about Metro: Last Light, “We won’t leave [development] time unexploited and will work closely together with 4A Games to make the game even better. It will receive all the attention it deserves”. We can’t help but be very excited about this, as our impressions of the game at E3 last year were nothing but stellar.

For those who don’t know, Metro: Last Light follows a post-nuclear strike in Russia and the events that follow. There are hints of paranormal activity as well as mutations weaved through the narrative, and while we can’t make a solid judgment on the game just yet, the 20 minutes we saw last year blew us away.

The game is also launching with something called Ranger Mode, a HUD-less, ammo-limited game mode that makes the overall experience that much more difficult.

Perhaps most exciting about all this is that Deep Silver has announced that they’ve got plans after Last Light, signalling that the franchise won’t end with this instalment. The games are based on a series of novels, Metro 2033, Metro 2034, and Metro 2035. The first game in the series, Metro 2033, was a PC-only title that earned critical acclaim with a score of 81% on Metacritic.

Metro: Last Light will release as a limited edition for the first production run of the game, as we reported earlier. After that, games purchased at retail will become standard editions. 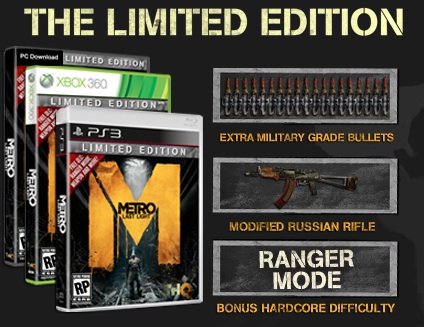