After the enigmatic teaser of an upcoming video game known only as, ‘The Phantom Pain’ debuted at the 2012 Spike Video Game Awards, gamers seemed to share the on-screen character’s confused and seemingly hallucinogenic state of mind. Was that legendary Metal Gear Solid anti-hero, Big Boss they saw? Surely, Konami had not handed their mega-successful Metal Gear Solid franchise to some unknown Herman Melville-inspired Swedish developer, led by a bandage-faced man with a suspiciously re-arrangeable name, right? It couldn’t be…

Alas, it turns out so many Metal Gear Solid fans weren’t losing their minds after all! In a tangled and massively detailed conspiracy worthy of the finest Metal Gear Solid storylines, The Phantom Pain’s apparent developer and mysterious boss were revealed to be fabrications. The ‘game’ in development by the fictional Moby Dick Studios was actually part of a series of highly detailed viral marketing that came to a head at this year’s GDC, where all was made clear. 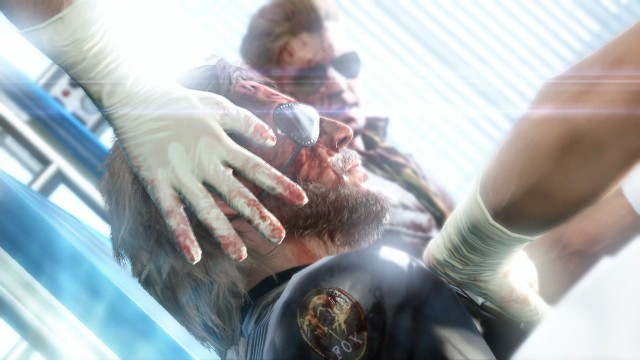 Rarely has a developer gone to such elaborate lengths to market a game even before it’s properly announced. Obviously, both Konami and Kojima Productions are fully aware of just how much this announcement means to fans! Sure enough, the reveal of Metal Gear Solid V was met with deafening cheers, applause and community approval.

The game is currently without any kind of release window, though it is expected to launch on both the PS3 and Xbox 360 at this point, contrary to its mainline predecessor, Metal Gear Solid 4: Guns of the Patriots, which still remains a PS3 exclusive. Metal Gear Solid V: The Phantom Pain seems to be joining a growing roster of high-profile multiplatform titles to skip Nintendo’s currently-struggling Wii U console, and, considering the Metal Gear Solid franchise’s extra affinity for PlayStation platforms, many are mystified as to why the game is currently not planned for release on Sony’s upcoming PS4 console. Granted, anything is possible, as developers like Ubisoft, Bungie and Blizzard originally announced games to merely be releasing on the PS3, only to confirm PS4 ports of these titles later, so perhaps Big Boss will still infiltrate Sony’s next-gen console yet, if we’re lucky!

While much of the game’s plot is predictably being kept under a very tight lockdown by Konami and Kojima Productions, some details have still managed to come to light, including one disappointing confirmation that beloved lead actor, David Hayter will not be reprising his role as Big Boss this time around. Regardless, the game will be a direct sequel to 2010’s highly acclaimed Metal Gear Solid: Peace Walker on the PSP, ironically planned to be Metal Gear Solid V itself originally, before it was decided to make it a separate title. It will once again star legendary anti-hero, Big Boss, who appears to have lost an arm to an injury that left him in a coma for nine years (potentially placing the game’s setting in 1983, if said injury takes place immediately after Peace Walker’s conclusion), which he appears to sustain during the Ground Zeroes prologue. Mysterious and seemingly supernatural forces appear to haunt the hospital tending to Big Boss, as he’s urged out by a mysterious companion. Is it drugs? Is it insanity? Is it potentially all taking place in Big Boss’s head? One thing is likely; These seemingly supernatural threats, apparently the work of some unknown villains called XOF (a not-too-veiled hint that they have an undeniable connection to Big Boss and his FOX unit), are sure to lend themselves to more excellent boss battles, as the Metal Gear franchise has been famous for since its beginning in 1987!

The rest is all up to speculation. Perhaps most curious however is the fact that Metal Gear Solid V: The Phantom Pain is currently the only Metal Gear title in the history of the franchise to use a Roman numeral. The conclusion of the lengthy  reveal trailer seems to suggest that this is indeed a vital hint of something important within the plot as well. Perhaps it’s a reference to the mysterious line about the ‘vanished’?

Many, many mysteries still layer Metal Gear Solid V: The Phantom Pain’s announcement, and all related parties‘ lips are tightly sealed for now. Here’s hoping that this year’s E3 in June will shed more light on how, and more importantly, when, gamers worldwide can continue the saga of Big Boss!