A few months ago, the internet got word of a resume that detailed a Wii U version of Ubisoft’s upcoming Splinter Cell: Blacklist. Even before that, a GameStop store in Ireland had mockups of the game’s box art.

Fast forward to April and Ubisoft has taken the lid off the game, officially announcing Blacklist on Nintendo’s Wii U.

Ubisoft, in its press release, said the GamePad will have touchscreen functionality as well as motion-based inputs that are “sure to immerse fans and gamers alike in this thrilling modern-day adventure.”

We’re a little worried that the touchscreen functionality of the game hasn’t been detailed much outside of weapon management, and we’ll be a bit disappointed if it just turns out to be for keypad hacking and such. Motion capabilities look to be pretty cool, however, as the GamePad looks to be tied into the snake cam that makes its much-welcomed return to the franchise.

Of course, the mission of the game remains the same:

In Tom Clancy’s Splinter Cell Blacklist, players take on the role of lethal operative Sam Fisher who must stop an international terrorist group behind The Blacklist, a series of escalating attacks on US assets. Operating under the newly formed Fourth Echelon unit, Sam Fisher and his team will use any means necessary to prevent the next deadly assault.

Delivering a gripping modern-day storyline, the game brings back core elements of the franchise and incorporates a new level of technical innovation and design to create the biggest Splinter Cell to date. Tom Clancy’s Splinter Cell Blacklist will push the series to even greater heights by offering a complete package where single-player, co-op and multiplayer are tied to a universal economy system supporting a wide variety of play styles. Ghost players want to remain undetected; they analyze and plan the best way to go unseen. Panther players look for lethality in the most efficient and silent way. Assault players rely on instincts and are about open fire.

Colour us excited, as we can’t wait to hop back into Sam’s boots in Blacklist. It might also be interesting to note that this will be his first outing on a Nintendo home console.

The Wii U version of the game launches alongside Xbox 360, PlayStation 3, and PC versions on August 20th. 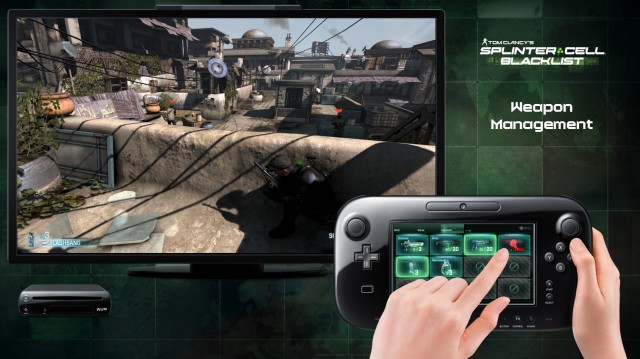