Adam Orth posted some remarkably stupid comments this week as people complain about Microsoft’s rumoured decision to make the next Xbox console an always online machine.

Orth famously tweeted “deal with it” alongside a popular meme of Obama, as well as some pretty ridiculous comparisons to other devices that might require “always on” connections. Not internet-based devices, though. Things like vacuums. You know, because it’s required that they’re “always” connected to power. Right. 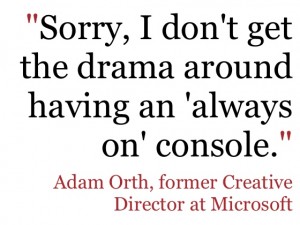 Polygon is now reporting that Adam Orth has permanently left his position as Creative Director at Microsoft, though it is unknown if this was a voluntary or forced resignation.

Microsoft tried to backpedal earlier in the week, saying they “are aware of the comments made by an employee on Twitter” and the expected, “his personal views are not reflective of those of the company.”

Well that makes sense, but there are a few reasons we hope Adam Orth never gets a job in the gaming industry ever again. He’s committed more than one disservice to gaming as a whole and he shouldn’t work here again.

He betrayed his team. Outing a feature of a console in the way that he did – especially one that would clearly come under fire if perhaps it isn’t explained correctly – is wrong and it makes him a bit (or a lot) of an ass to the team he let down.

It’s wrong. He revealed, whether it turns out to be real or not, something that was not his to reveal. His comments never directly say that the next Xbox will be an always-on machine, but did he think his comments would do anything to dissuade people from thinking that’s where Microsoft is headed? Absolutely not.

He disrespected gamers. Not only did Orth do what he did, he did it in a way that had no tact or respect whatsoever. He ignored the people who keep him in business: the gamers. He likely cost Microsoft hundreds of thousands, if not millions of dollars in intellectual property damage, not to mention a ton of bad publicity at the same time.

There’s probably a single silver lining here, assuming you really want to see it. Orth’s comments may have made it glaringly obvious that Microsoft is making the wrong choice with an always-online infrastructure (though why they wouldn’t have come to this realization before is beyond us). That also means there would have been credence to the rumours in the first place, but that’s not saying much given how fast rumours come and go in the gaming space, especially in the months leading up to a new console reveal.

We’ll keep you updated on all the latest, but what do you think should have happened? Should Adam Orth have been able to keep his job? Should he be blacklisted from other companies? Sound off in the comments and on Twitter and Facebook!