Microsoft has finally announced that they will be unveiling the next generation of Xbox to us on May 21st. But how much do we know about the next Xbox already? Arguably, nothing, until it is confirmed by someone at the company, but here are our best guesses so far.

1) Always online will play a role. This has been a big sticking point for a lot of people, some of whom are even saying they won’t look at Microsoft’s next offering if it forces them online. However, new rumours suggest that Microsoft has put the functionality in its box and that it will be up to game developers or publishers to decide whether they use it. Now, that’s all fine and dandy, though it doesn’t seem like always online capability would have to be built into the system level. Publishers could, theoretically at least, make even single player games connect into a sort of “matchmaking” server, though the user would be the only active player. Sure, there are complexities abound, but let’s hope for Microsoft’s sake – and for gamers as a whole – that this console is not always online if it doesn’t need to be.

2) The controller won’t change… much. Microsoft has pretty much the best controller on the market in a lot of people’s opinions. While it’s fair to say that Sony has a tested and design in the DualShock 3, it has a serious anorexia issue and feels quite plasticky to us. That said, Microsoft’s current controller is a bit heavy, though it does have some pretty nifty features like that headphone jack and transforming d-pad (in some models, at least). We’re not sure that Microsoft is going to reveal an entirely new design of the controller, though we’re expecting a move to built-in rechargeable batteries, a single colour design, and a refined look as opposed to a different one altogether.

3) This will be an entertainment box, gaming included. In recent years, Microsoft has really pushed the Xbox 360 as the centre of the digital hub for most consumers. While other consoles play Netflix and Hulu, Xbox 360 has consistently outpaced Nintendo and Sony with digital content partnerships that tie into existing cable providers. This is expected to grow as rumours state the next generation Xbox will have an HDMI-in port as well as an HDMI-out. This will allow the user’s cable box to be threaded through the Xbox and the console to control what the television does. Don’t underestimate this: it will be huge.

4) Achievements will change. This is probably the only rumour we’ve heard about but are really disappointed by. Nevertheless, achievements are a relatively old feature, though because they work so well, we wonder how Microsoft could possibly improve them. We’ll give them the benefit of the doubt and say t

hat they’ll blow us away, but we’re worried that our days of huge gamerscores are numbered.

5) It’ll be five hundred bucks. We’re pretty confident that Microsoft is going to keep the Xbox 360 around for at least another year or two before it fades into the distance. That puts them in a delicate position as pricing comes up around the next generation. We’re thinking the folks in Redmond are going to drop the 4GB Xbox 360 to $149 and the bundle with Kinect to $199. That leaves some space for a premium model of next-gen Xbox at $499 and enough room to introduce something at $399 if Sony blows everyone out of the water and announces a $400 console at E3. With these points, we don’t actually expect to hear anything about price or a solid release date at the May 21st event, and while we’re not banking on hearing one at E3, either, that’s more of a solid bet.

6) Everyone gets a free Kinect 2.0! Because it’ll be mandatory. And Microsoft would be a big pile of poop if they didn’t include something mandatory in the box. So technically, you’ll be paying for the Kinect, but you’ll also get it in the box for free. If that makes sense. Which it doesn’t. But you get the point.

7) It won’t actually run Windows 8. It would be a huge mistake for Microsoft to show off their new Xbox and then say it runs an off-the-shelf operating system. Doing so would downplay the importance of this standalone box, especially given the proliferation of tablets and notebooks that will be running the same software. What we do think will happen is that Microsoft will announce that the Xbox is built on the same kernel as Windows 8 platforms so that it is, at its core, more interoperable with its desktop and mobile platforms. That’ll make it easier to integrate platform-agnostic achievements and distribute games via multiple platforms. It could even mean the beginning of a portable Xbox, though we think that’ll just be a tablet running “Xbox Surface”, if such a thing ever exists.

So there you have it. The seven biggest things we’re expecting on May 21st. We’re just over three weeks away from the event, so we expect bigger and better leaks to be coming in the next 21 days or so, alongside perhaps a photo of the console, its controller, or perhaps even its interface.

Oh, and for those who aren’t satisfied with the above seven points:

Stay tuned to Eggplante as we bring out Eggplante! BINGO for another ride, as well as all the latest news on Twitter and Facebook from our favourite company in Redmond! 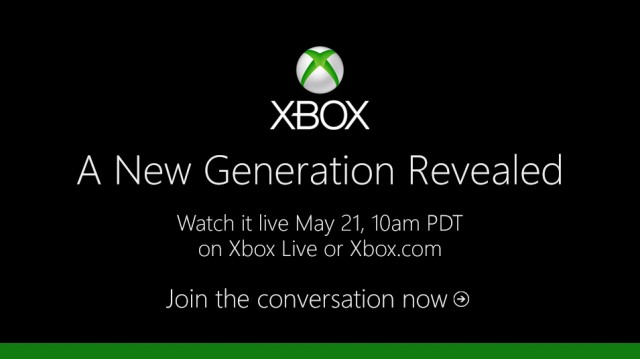