After numerous legal issues, production stalls and all kinds of development hell, the Terminator movie franchise is finally set to rise again!

Not only that, but a multiple-movie deal has already been inked between Paramount, Skydance Productions and rights-holding Annapurna Pictures, with an entire new trilogy of movies being planned! The first will arrive on June 26th, 2015, with no other details at this time, beyond the press release claiming that this trilogy will ‘stand alone’ from the prior movies. Whether or not this indicates a reboot is currently unclear.

Original series star, Arnold Schwarzenegger, who played the title character of 1984’s The Terminator in one of his most iconic roles, has made it no secret that he has negotiated for a role in a prospective fifth Terminator movie since returning to acting. Despite his age, Arnold appears very eager to reprise one of his most beloved roles. The only movie in the series he hasn’t appeared in to date is 2009’s Terminator Salvation, though his likeness was placed on a body double for the climactic fight scene.

The Terminator series is regarded as one of the best sci-fi movie franchises ever conceived, even today. The bulk of the series revolves around the birth and growth of John Connor, future leader of a resistance that will battle against machines after they take over the world, following a nuclear holocaust in the future. Trained by his now-battle-hardened mother, Sarah Connor, John and his company try to elude various nigh-indestructible robots called ‘Terminators’ that are sent back in time to kill John in the past, causing him to cease existing in the future, and thus dooming humanity to lose their future struggle.

Both the 1984 original and its 1991 sequel, Terminator 2: Judgment Day frequently place on lists of the best movies ever made, with the second also being regarded as one of the best sequels ever made. The third movie, 2003’s Terminator 3: Rise of the Machines drew more mixed feedback however. This was also true of Terminator Salvation, which shifted the canon into the future to focus on the much-touted war against totalitarian super-computer, Skynet, casting Christian Bale as the now-grown savour of humanity, John Connor. It also resulted in a rather infamous controversy involving Christian Bale having a raging blowout toward a lighting technician, but we suppose that’s water under the bridge now. 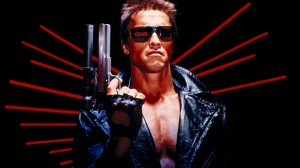 The series’ enduring popularity has also spawned comic books, video games and even a widely-adored television show, Terminator: The Sarah Connor Chronicles. Despite its high acclaim and fan adoration, the show suffered from low ratings, and was canceled after only two seasons. Some hope that a Kickstarter campaign will bring the show back, though it likely wouldn’t be any time soon, as series star, Lena Headey has since settled into a lengthy gig on television sensation, Game of Thrones.

The start of a new Terminator trilogy has become the latest reason for movie geeks to consider 2015 a landmark year for blockbuster movie releases! Star Wars: Episode VII, The Avengers 2, Assassin’s Creed, Pirates of the Caribbean 5, and Ratchet & Clank number among other massive movie releases to arrive for the same Summer season. At other points in the year, moviegoers can also look forward to the long-delayed Ant-Man movie, the Fantastic Four reboot, the conclusion to the Hunger Games saga, and massively anticipated Pixar sequel, Finding Dory. That’s just so far as well!

We’ll be keeping a very close eye on developments related to Terminator and its new movie trilogy! For now however, be sure to mark your calendars, as the currently-untitled fifth Terminator movie is coming on June 26th, 2015! You can bet that Eggplante will certainly be back with any and all Terminator news, so come with us if you want to stay informed!