Parks and Recreation finally did something worthwhile with April’s existential crisis, which has largely been a weak link in an otherwise stellar final season for the show so far. “Ms. Ludgate-Dwyer Goes to Washington” had April finally confront her lack of fulfillment in government, with her friends stepping in to try and help her find the perfect job, and Leslie not quite understanding the whole thing at first.

April was front and center this episode, as she takes a trip to Washington with Leslie. Leslie makes April entire binders full of plans for April’s government future, which creates an unprecedented level of anxiety that the show has never seen with April before. It’s actually sort of refreshing to be reminded that April is still human, and is not completely impervious to fear or panic. Seeing her try and keep it together as Leslie gives her increasingly absurd career options was both amusing and genuinely emotional.

Eventually however, April spills that she no longer wants to work in government, and desires to quit her job at the Parks Department. Leslie reacts in shock, disbelief, and eventually hostility. In fact, it takes the wisdom of her friend, one of several political guest stars this episode, Madeleine Albright (whom Leslie hilariously wore down until she became Leslie’s friend out of sheer annoyance), to talk Leslie down, and remind her to consider April’s feelings. Fortunately, Leslie eventually concedes that April must forge her own path, and helps take her to a career office to find a new occupation.

Things end up working out extra well when April decides that she wants to work at the career office as well. This also happens to come at hysterically inconvenient time for Ben, Ron and Andy, who finally succeeded at getting April a job at Ben’s favourite accounting firm that he loves to quit, only to get the call that April has taken another job just as the firm is ready to hire her. This was extremely funny, since it was a reprise of the running gag with Ben running to that firm every time he has career issues, only to quit right away because something else happens, but seeing April now be the one dicking around the firm made the joke work better than ever!

Also very amusing were several of the guys’ previous efforts to help April find her place in life. Andy makes a fireworks display, complete with creepy April face mask to try and convince the accounting firm to hire her in the parking lot (it’s amazing that they didn’t call security on Andy the next day!), which is just the latest way that Andy’s well-meaning goofiness has inadvertently created some funny mayhem. All the while, we also learn that Ron has not one, not two, but three brothers, all with similar names, apparel and mannerisms. The fact that Ron waves off the other two, and only begrudgingly introduces the brother that works directly under him was all the more funny. It seems like such an important fact for the show to drop right as it’s ending, but given that Ron is an absurdly private person, it actually makes perfect sense that we’d never meet his brothers, or even assume that he had brothers! It only makes the bit funnier.

The best bits of the episode involved the heart-to-hearts between April and Leslie however, particularly when April confesses to Leslie that she was directionless when first taking her internship at the Parks Department, and Leslie’s enthusiasm made her fall backwards into that world for a decade, leaving her all the more unsure of her real future. Fortunately, April is still thankful for the past ten years, and that leads to a very sweet moment between the two. It also teases that Leslie and April can still be together, as Leslie is also offered a job in Washington, which will make the transition to Ben being tapped for Congress all the more cut-and-dry. 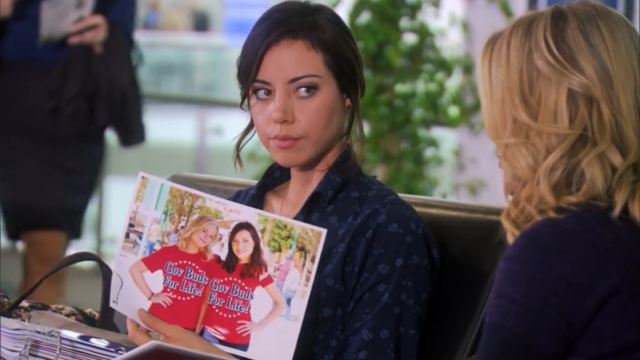 “Ms. Ludgate-Dwyer Goes to Washington” was a worthwhile result from what’s otherwise been a pretty shaky final season arc for April so far. It was another reliably funny episode with lots of character and heart, and seemed to finally ease April’s worries, putting her on the first day of the rest of her life, even if all of that will unfold after the show has wrapped. Still, like every other personality on the show that we’ll soon have to say goodbye to, it’s wonderful that, despite seven years of ridiculous hijinx, April ended up finding true happiness.