Paul Blart: Mall Cop 2 is the laziest, most blatantly half-assed sequel since, well, Grown Ups 2! Say what you will about Happy Madison’s recent misfires, but at least they were formerly committed to consistent new ideas, and still occasionally are, if this Summer’s Pixels is any indication. The evidence continues to mount however that the house that Adam Sandler built has absolutely no business making sequels, which somehow boil down to even lesser sums than their comedically flat predecessors.

Paul Blart: Mall Cop got away with its mediocrity in 2009, due to releasing in an especially grim January for that year, and somewhat due to the likeability of Kevin James and Jayma Mays in the lead roles. Now, an inexplicable six years later, Paul Blart: Mall Cop 2 collapses onto the scene with all of the grace of a demented bull elephant, completely dead-on-arrival, and now having lost Jayma Mays. It’s a thankless sequel purely made to cash in on the surprise success of the original, as with Grown Ups 2, and pretty much gave itself a death sentence when it sandwiched itself between the surprisingly great Furious 7, and the sure-to-be-great Avengers: Age of Ultron. 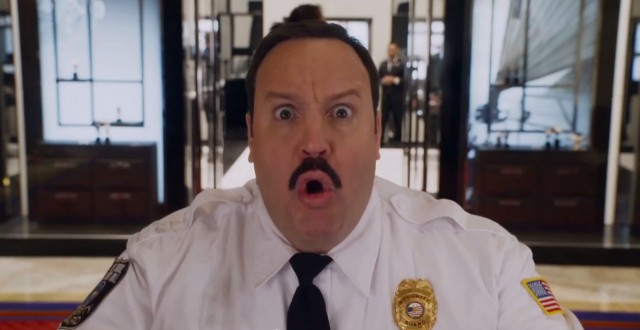 This sequel will probably barely register on the radar for moviegoers, since, worse than being aggressively bad, it’s just even more mediocre, to the point where it’s a complete waste of time. It’s a nothing of a movie. A purely wasteful, incredibly unfulfilling fart of cinema. It’s made of recycled parts, rehashing much of the same humour as the first movie for the most part, and, while it at least has the decency to place itself in a new setting, it doesn’t do all that much of note with it.

If you really loved the first movie, for whatever reason, then the sequel is much of the same, only even lesser than its predecessor. Unless you’re really desperate to see Kevin James fall down a lot again though, you likely have far better things to do than see this.

Once again, we have Paul Blart, round, clumsy and inept as ever, returning to once again be the unlikely hero to a bunch of bad guys who conveniently keep forgetting to just shoot the bastard. He hasn’t changed. No, really. He hasn’t. Despite the repeated references to his takedown of the thieves in the original Paul Blart: Mall Cop, and even a line that directly calls out the sequel as being six years too late, Blart is still the world’s worst security guard, and yet is oblivious to how terrible and incompetent he is. Yes, it’s the exact same joke as the first movie, stretched even thinner.

At the very least, Blart’s daughter, Maya gets a semi-interesting new story arc, when she gets an acceptance letter to UCLA, and then has to debate leaving her father behind, after he was already abandoned by two wives, and his mother was hit by a milk truck. No, really. In the opening minutes of the movie, Mrs. Blart is killed by a milk truck. This isn’t even a spoiler. It’s just a flat-out idiotic way to get rid of a character to force a new arc for Maya, with Raini Rodriguez being seemingly the only other person reprising a proper role from the first movie, besides Kevin James.

This is to say nothing of Paul Blart: Mall Cop’s happy ending getting crapped all over in the sequel’s first minute, with Jayma Mays’ character revealing to have divorced Blart mere days later, after fits of, “Aggressive vomiting.” and, “Second thoughts.” Wow. If that was meant to be a joke, it wasn’t funny. It just makes this pointless sequel that nobody asked for feel all the more insulting.

Even with a potentially interesting idea explored with Maya however, Paul Blart: Mall Cop 2 manages to flub that, thanks to making Blart and Maya incredibly inconsistent between scenes. In one scene for example, Blart is a control freak that is obsessively worried for his daughter’s safety. Then, in another scene, Blart won’t even check his phone during a speech, even when he knows that it’s likely Maya calling him! What the hell?! Likewise, Maya will aggressively push her father away in one scene, saying he’s cloying, then in the very next scene, she’ll be all concerned about looking after him again. My kingdom for some character consistency! 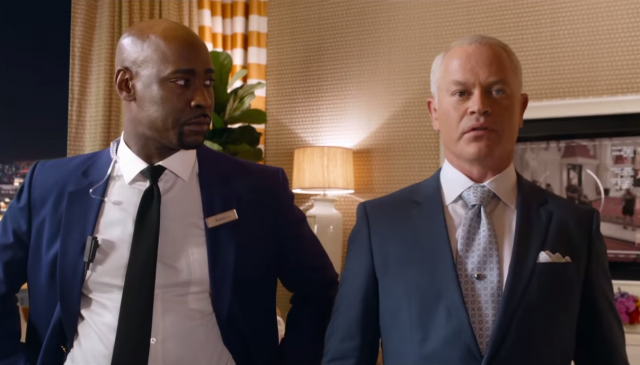 This basically means that the characters of Paul Blart: Mall Cop 2 are simply doing as the script demands, and don’t have well-defined personalities of their own, beyond Blart generally being a doofus that always seems to do the wrong thing at the wrong time, yet still somehow manages to save the day against criminals that he really shouldn’t be able to thwart, by any stretch.

This time, the movie tries to get around the obvious plot hole of villains that won’t just shoot Blart on sight, by trying to make him a big presence at a security convention in Las Vegas, while a group of thieves try and steal the art at his hotel. Apparently, all of these really valuable art pieces are conveniently left in wide open spaces with absolutely no guards or security cameras whatsoever! The movie tries to claim that Las Vegas has the world’s best security, but you wouldn’t know it from looking here, since all of the hotel’s most valuable items are just left for any idiot to walk off with.

At the very least, Neal McDonough’s heist leader, Vincent is a considerable step up from the whiny and generally annoying Veck from the first movie, but you can tell that McDonough just doesn’t care, reading his dopey lines for an easy paycheque. His nameless goons are completely unmemorable as well, and his art-stealing operation may have been more interesting, if hotel security wasn’t strangely non-existent, despite the obvious irony that the hotel is having an expo on security!

The rest of the supporting cast isn’t even worth mentioning. There’s some other security guards that serve as one-note gag characters, but beyond one tongue-in-cheek climactic action scene with the ensemble of guards and villains, they don’t really do anything. Likewise, there’s an odd and completely confusing arc where Blart somehow seduces the hotel manager by accident, yet thinks he’s doing it on purpose, despite the fact that she’s engaged, and… What?! It just makes no sense, fails to be funny, and devours the movie’s already short runtime.

In the end, Paul Blart: Mall Cop 2 is still mainly about watching the fat idiot bumble around, with even less happening than the first movie. There isn’t much else in the way of real character arcs beyond that.

Paul Blart: Mall Cop 2 does make an effort to separate itself from its predecessor. It thankfully doesn’t take the low-hanging fruit of having another group of criminals inexplicably attack the West Orange Pavilion Mall, and instead, has Blart invited to a security convention in Las Vegas, along with other security guards across the country. At the same time however, a group of highly sophisticated (or blind lucky) art thieves, try to steal the art in Blart’s Las Vegas hotel, obviously not accounting for the parade of lazy writing that will put Blart against them.

The storyline in Paul Blart: Mall Cop 2, amazingly, makes even less sense than the first movie. It’s nice that it tried a different storyline, but it still ends up feeling like a rehash of its predecessor. The movie’s story can simply be boiled down to the oblivious and physically incapable Blart making a fool out of himself while he somehow manages to beat the bad guys, with a bit of help in this case. There is an attempt at a theme of family and letting go with Maya’s whole UCLA arc, but it’s handled way too clumsily and inconsistently to really resonate. 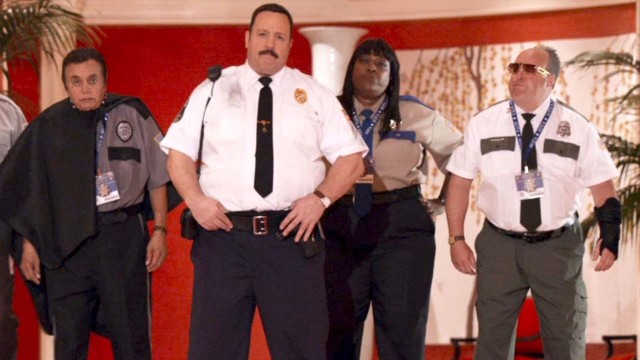 Making matters worse is the fact that the story’s jokes just aren’t funny. The movie can’t make up its mind about whether it wants to be a live-action cartoon, or whether it wants to be more grounded, and most of its jokes feel forced, non-sensical, or a mix of both. I sat in a crowded screening that spent most of the movie being dead silent, with barely more than one or two slight chuckles throughout this movie’s entire 94-minute runtime. That describes this movie better than any review ever could.

You’ll be lucky to remember a damn thing about the storyline of Paul Blart: Mall Cop 2 after you’ve finished watching it. It’s a very phoned-in, non-sensical sequel that relies on the same loose, recycled collection of gags to sustain it, even when said gags barely worked that well in the previous movie!

Andy Fickman takes over directing duties from Steve Carr in Paul Blart: Mall Cop 2, and Fickman’s resume is definitely not assuring. The closest he’s come to helming a decent flick is 2009’s Race to Witch Mountain, with his other claims to fame including horrendous bombs like You Again, She’s the Man, and The Game Plan. We are not in good hands here.

Fickman’s experience with lazy family flicks is the perfect kind of direction for Paul Blart: Mall Cop 2, in that it’s presented with no consistent rhyme or reason, with the direction being just as schizophrenic as the character writing. The movie has no consistent sense of style or presentation whatsoever, moving at random between vaguely sophisticated to flat-out lunacy, and everywhere in between.

When it comes to it, the movie’s direction is as lazy as anything else, simply recreating the same unremarkable direction from the first movie under Carr’s helm, with even less sense or consistency.

Paul Blart: Mall Cop 2 is the very definition of a superfluous cash-in sequel that nobody asked for. It doesn’t even do that terribly well, since it’s about five years late to the big screen. It’s an incredibly lazy movie, in terms of the character work, the story, the direction, the quote/unquote, “Action”, and just about everything else. While some initial effort was made to put the movie in a new setting, and create a new central character conflict for Blart and his daughter, the movie doesn’t ultimately do anything with these ideas.

No, Paul Blart: Mall Cop 2 would rather recycle the same tired, juvenile ‘fat guy fall down’ slapstick, ad nauseum, presenting no other draw beyond that. There are literally almost 60 different moments (I counted!), that just have a scene of someone falling down, usually Kevin James. That’s not a joke. That’s just beating a dead horse.

So, save your movie money, and skip this thankless, pointless follow-up. You have no shortage of high-quality Summer blockbusters to start looking forward to in just a few weeks. most, if not all of which, will no doubt deserve it more. As real-world logic dictates, Paul Blart can’t possibly compete with the big boys.

Paul Blart: Mall Cop 2 Review
Paul Blart: Mall Cop 2 is a lazy, dead-on-arrival sequel that is far too late to the party, and doesn't deliver anything of note, let alone anything truly funny. No one asked for it, and no one has any reason to see it.
CHARACTERS40%
PLOT30%
DIRECTION40%
THE GOOD STUFF
THE NOT-SO-GOOD STUFF
2015-04-22
37%Overall Score
Reader Rating: (0 Votes)
0%